The Day GLO’s Fortune Smiled On FORTUNE In PH 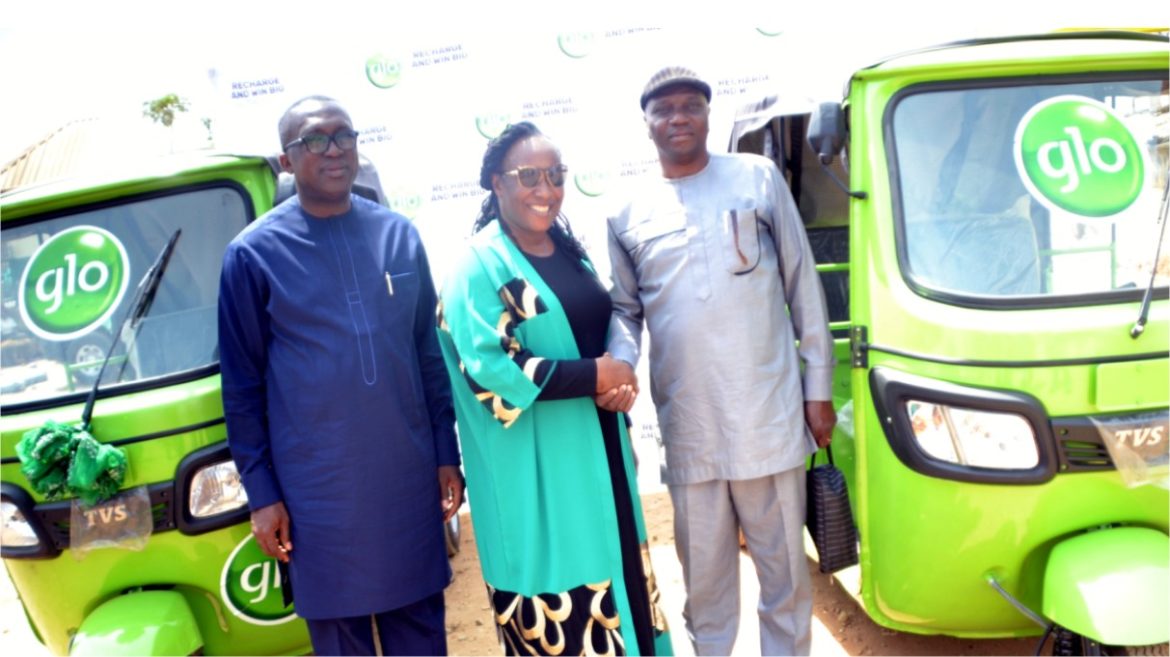 In the African setting, the name a man bears is considered very significant and believed to be tied to the man’s fortune or misfortune. The saying goes that a child’s name is a pointer to who he is in life. These world outlook is responsible for why parents pay particular attention to the names they give their children.

For Miss Dike FORTUNE Chinyere, a Project Planner with a Construction company in the Garden City of Port Harcourt, her middle name, FORTUNE, spoke for her in the just concluded Port Harcourt edition of the consumer empowerment promotion organised by the grandmasters of data, Globacom, and tagged My Own Don Beta, during which the pretty damsel won a tricycle otherwise known as Keke.

Fortune, who took possession of the brand new keke at a colourful presentation ceremony held at the Rumuokwurusi Community, Port Harcourt, last Friday, exhibited the truism in the saying that “happy is the bride that the sun shines on”. Though she was not the only one who received the star prize at the ceremony, Fortune, however, was the cynosure of all eyes as she exuded deep seated joy and happiness.

The project manager had this to say after taking possession of her keke: “I won a Keke. My own don beta. I was shocked because I did not know there was an on-going promo. I went online to check. One of my bosses also said my winning has reinforced his belief that people are winning and he said he would tell everybody that Glo promo is real! I will use the keke for business by getting somebody to ride it for me. I say thank you to Glo and to Nigerians, I say; believe there is still hope”!

Another tricycle winner, who also received his prize at the ceremony was Joseph Omeke, who runs a chain of betting business in the city. To him, “the keke could not have come at a better time than this time because this will greatly help in monitoring my different shops as I will give the keke to my supervisor to assist in his supervisory duty”.

Also receiving his generator prize at the colourful ceremony, was Peterson Benjamin, a church worker in Anglican Church in Eliozu town, Port Harcourt. He described the presentation ceremony as “grassroots outreach, which has boosted the credibility of the Glo My Own Don Beta promo among the people as everyone can see that Glo delivers on its promises to the people. With my personal experience, I believe in the authenticity of this promo. I will use it for power generation in my house”.

And for David Sunday Epelestima, a music Producer, at Woje Elejiji, winning a keke is like a dream. He promised to treasure the star prize and pay personal attention to it so as to justify the essence of the promo, which is empowerment.

He spoke thus: “I won a Keke. God has provided the money I will use to register my music production business. This is like a dream come true. I am married and I think I will drive the Keke myself in order to maintain it because if I give another person, he may spoil it”.

Earlier that week on Monday at Slaughter Market in Port Harcourt, Globacom had also presented prizes to winners in the full glare of market leaders, representatives of regulatory authorities, friends and associates of the winners as well as passersby.

Egboni Maxwell Kenneth, a generator winner, was fully soaked in the joy of the moment. He promised to use the prize to improve his business located at Ahoada East. On his part, Anene Chuje, who is into building construction in Aba and won an industrial sewing machine, promised to empower his younger brother “who is a tailor to improve his sewing business”.

Two police officers, Friday Macvier and Onah Michael, won a generator and a grinding machine respectively at the promo and also took possession of their prizes. Onah, a Police Inspector, said that he would give the grinding machine to his wife and daughter “to put it to use in the market and the proceeds will assist our domestic needs. I advise whosoever is using Glo to also try as they can win something. I never expected to win.”

That was just as Okoro Okorenomfon, a 500 level student of the Federal University of Technology, Owerri, Information Technology, who also won a grinding machine said: “I intend to give the grinding machine I won to my mother so that she can include it in her business. I want to thank Glo and I want to urge them to keep doing this for Nigerians”.

On her part, Popoola Olize Omolayo, a business woman and laundry shop owner in Port Harcourt, promised to use the generator she won to “serve as a backup for my business and I am so excited about it. I really want to appreciate Glo for this since I did not do anything to win it. I want to tell them that they should keep this up and more blessings for them”.

Iyari Ikhime a winner of an industrial sewing machine said as an “entrepreneur, a web designer and event planner, I will keep the sewing machine for my fashion business as I intend venturing into fashion and designing. Glo has been doing a lot of good job since inception and they should keep on doing what they do.”

Jedidiah Olamide, a fabric seller who won generator, said: “I think I will take the generator to my mother who is currently helping me to baby sit now. I have a generator in my own house. I was planning to buy a generator for her before this gift. Thank you to Glo and they should keep up the good work. Initially, I thought it was a scam but they have proved themselves. I will encourage people to use Glo more”. For Mrs. Mary Obaje, a baker and maker of soft furnishings like throw pillows, bedsheets and bean bags, her purchase of a Glo SIM was informed by her patriotism because “Glo is a Nigerian company. I just bought it because the money would go around. I will use the sewing machine for my soft furnishing business”.

“First and foremost, I want to say a very big thank you to the organisers of the prizes and our own brother, the Chairman of Glo for what he is doing for our people. The empowerment is what our people need at this present time. There is a lot of hardship in the land. With this empowerment, I know it will go a long way to ease the hardship amongst our people. I want to pray that God Almighty will give him the strength to go higher and do more for our people”, he said.

In her remarks, Lady Kate Ibekwe, Head of Port Harcourt Liaison Office, NLRC, said that “Given the antecedents of Glo in all the lottery presentations they have conducted and we have witnessed, Glo has always been up to date with our standards, complied with all our regulations and have given out every item they promised. Glo is a good ambassador. The Glo My Own Don Beta kicked off in Ikeja, Lagos on October 3, 2019 and Nigerians across the country benefited from the empowerment promotion.

The Love Stories Of Popular Celebrities We Know