The Day I Made OBJ Weep In LAGOS – 64 Year Old Veteran Poet, AJOBIEWE 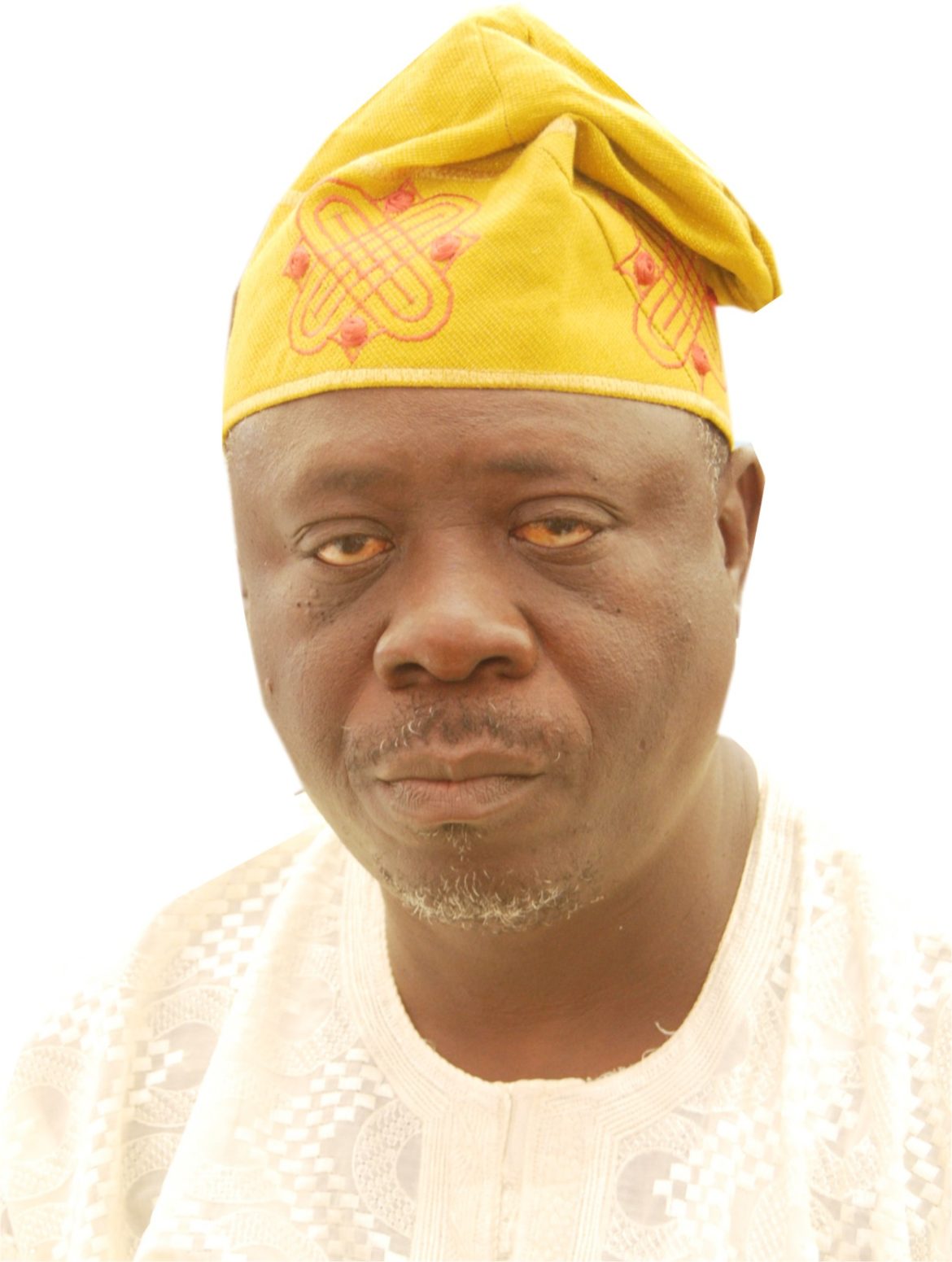 Among Yorubas poets, Chief Sulaimon Ayilara Aremu, popularly known as Ajobiewe, is a gifted praise singer. With a microphone in his hand, he could hold a listener spellbound as he takes a lyrical excursion into widely forgotten past of different lineages in the Yorubaland. His skills have endeared him to many dignitaries, eminent persons.

Ajobiewe has found favour on account of his dexterity in the art of praise-singing and he has remained the best at what he knows how to do.

Ajobiewe attributed his proficiency to his tenacity in acquiring more knowledge about the art after the initial inspiration he got from his late father. According to the artiste, who took to acting very early in life, his father was famous for his Ijala (hunter’s ode) and Egungun (masquerader’s) chants in his lifetime. But at that time, there was no money in it, he recalled.”I remember that in those days, he only did it to while away time. But, I was close to him and was taking more than a passing interest in what he was doing. After my father died, I travelled far and wide. There was no major town in Yorubaland that I did not live to learn one thing or the other about the indigenes of the towns. That is why I find it easy to chant Oriki of any lineage, including ethnic groups, outside Yoruba. Lagos will be the 22nd city I would live in my quest to learn about the culture and custom of Yoruba people. I had trained as a baker and this gave me the opportunity to move from one place to another. As a baker, all I needed to stay in a place was the presence of a bakery in the town. I would look for employment and put myself permanently on a night shift. During the day, I moved around town, looking for places where buffs played ‘Ayo’ and people whom I felt were knowledgeable in culture and tradition, as a baker, I enticed them with gifts of loaves of bread and they would go to lengths to tell me stories that were peculiar to their towns. Apart from Osogbo where I spent years, I spent months and one or two years in other places like Abeokuta, Okuku, Ijebu-Ode and Ibadan, among others. My father put me in school, but I was not bright enough because I spent 10 years in primary school before I left to learn bakery which I combined with acting as I joined various theatre groups where I horned my skills as minstrel, actor and dancer. I was a baker for a long time until I stopped altogether to face my art squarely and I thank God that I have no regrets”.

But while Ajobiewe reels out the various exploits he has wrought and the admiration he has won along the line, the poet would never forget the day he nearly lost his life as a result of his art. An event that began on a note of entertainment regrettably ended on a near-tragic note. He said, “I was contracted to perform at the burial. One of the children of the deceased, who was based abroad had objected to my invitation to perform at the burial. He said he couldn’t see any value my presence would add to the ceremony. But some of the children of the deceased persuaded him to allow me to perform saying that he was free to stop me if he was not impressed by my performance. By the time I started chanting his praise and recalling his pedigree, he stood transfixed. He just stood there and stared at me. I am sure that he spotted goose pimples because, by the time he regained himself, he began to spray money he had been given on the stage. After that he ran off stage, removed his dress, his shoes and his wristwatch and gave them to me still I continued. Now extremely overwhelmed and knowing not what to do, he suddenly ran inside. By the time he came out, he wielded a big cutlass and was coming menacingly towards me. I thank my stars that I was quick to note with my feet and fled the venue. It was not a funny scene at all because I had to leave town that very night.

Ajobiewe was one of the guest artistes that performed at the just concluded Ogo Yoruba Gbode, an event organised by Ayo Ewebiyi, and he met with City People Publisher, SEYE KEHINDE and City People’s Assistant Editor/ Head of City People TV, SUNDAY ADIGUN, where he spoke exclusively on how he inherited his career from his father and emphasized on a particular day former President, Chief Olusegun Obasanjo, emotionally broke down and shed tears of joy at Ajobiewe’s poetic citation of Obasanjo’s lineage.

How have you been able to maintain your relevance over the years?

Let me start by appreciating you for the privilege, May God continue to uphold you. The first thing is for one to be truthful in whatever you lay your hands on. Putting God first in everything is also very important. Don’t add any other thing apart from God. After God it is God.  You must also be assured that whatever you lay your hands on will prosper. It might not be smooth at the beginning, but it will surely end with thanks. But if you turn yourself to a Jack of all trades, you will end up being a master of none, because nobody will know you for a particular trade. But whatever you do and you stand by it, you research on it, you will definitely master it and become a master at it. Like I said, continuous research on what you know how to do best goes a long way, because that will give you an edge and guideline on what more you need to do to get better.

How long have you been practising poetry?

I inherited it, so it’s hard for me to say the exact year I started. I was born in Oct 8, 1955, and that is the only thing I grew up knowing how to do. So, it will be so difficult for me to pinpoint a particular year.

What is the name they called what you are doing?

It is called Yoruba praise poetry.

Is that what they fully practise in your family?

My father was a genius in the olden days. He knew many family cognomens in Yorubaland. You know it’s not possible for me to tell my father’s story. I met him on the job and I joined him. I mastered the job just as I learnt to speak. And that is what made it easy for me till date. To learn is different from an inbuilt, what you inherited. Look at Ray’s family; the likes of Muka Ray, Murphy Ray and Lasun Ray, you will know that acting is in their blood. They inherited it not that they learnt it. Look at Femi Adebayo and other Adebayos, you will see that acting is in their blood, not that they learnt it from anywhere or study it at any University. What has become part of you will definitely be different from what you learn.

Your name, Ajobiewe, is it a family name or stage name?

Ajobiewe is not a family name, I gave myself that name. Sulaiman Oyebamiji Odepidan Ogunyomi Egunjobi Aremu Omotanbaje the son of Ayilara are my names. I was the one who named myself that name, Ajobiewe. When we wanted to start Feyikogbon, you know they always call every Yoruba poet “Akigbe”. I told them not to call me Akigbe, they asked what name should they be calling me then and I said “Ajobiewe” That was how I started bearing the name till date.

What was your father’s reaction to your decision to choose his career?

I have travelled to so many places, I’ve even lost count; America, London, Germany, many countries. In fact, I was supposed to travel this year, but I had to change my plans because of politics. We are working for our politicians. By the grace of God next year April, I should be out of the country again. I will go to France first, then from there to Canada, America, London e.t.c.

What were the challenges you faced in your career?

I don’t always like to say I face any challenge. It can make one get discouraged easily. For example; it wasn’t when you started City People Magazine that you became popular. If you look at the challenges you faced at the inception, it’s possible, and you might have stopped publishing. I’m sure you must have been disappointed in so many ways. If you had looked at that, you wouldn’t have gotten to where you are today. Seriously, I don’t always remember whenever I’m facing any challenges. Funny enough, I may not even see it as challenges. I always face my business and I’ve not allowed anything to get into my head. If you are the one who always looks out for challenges, you won’t love your work. But if you love what you are doing, you won’t even remember the challenges, you will only remember the good part of it. I remember the day I went to performed for the former President Olusegun Obasanjo and he was crying, a whole Obasanjo, the President of the Federal Republic of Nigeria then; he rose up from his seat, came to where I was performing, hugged me and started crying profusely, like a baby.

That was in 2002. Will I ever experience that if I have looked at the challenges I’ve faced. If you must succeed in life, you must face challenges. It’s only if you don’t want to succeed you would get a job and always think of profit without challenges. Challenges are a must in life, but your ability to face it and conquer it is what matters most. I do tell my people, that if you think that because you have a problem today and you turned yourself to a drunkard, that problem will overpower you. It will only render you useless.

What were the qualities needed to make headways in this your career?

You must persevere. You must know that Rome wasn’t built in a day. To grow in life takes a process. That is just it.

How KENNEDY OKONKWO Became King Of Real Estate In LEKKI