The man who was ‘resurrected’ in viral video has been arrested 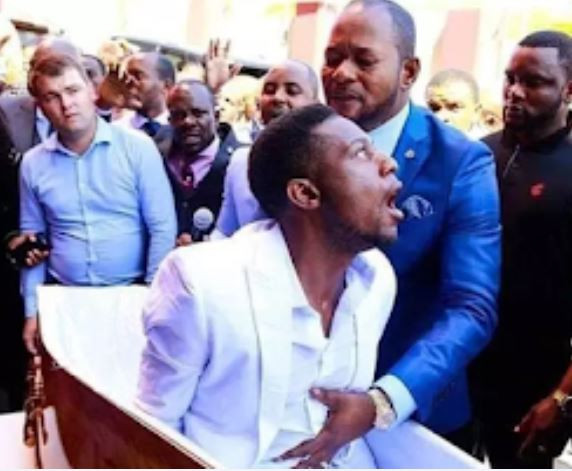 The man who was allegedly resurrected in a video by Pastor Alph Lukau of Alleluia International Ministries has been identified as Brighton from Zimbabwe.

Brighton is a 29-year-old man who worked at timber a company in Pretoria. The company, Vincent Amoretti Ltd, told Eyewitness News on Tuesday that the last time they saw Brighton was on February 19th, when he arrived late for work. Brighton has not been at work since last Tuesday and is his absence, is being treated absent with leave.

Now, one of Brighton’s former employers has revealed the extent of his deception and that he has been arrested.

The man who was ?resurrected? by Pastor Alph Lukau in viral video has?been Identified and arrested.

According to a report by ‘The Citizen’ who spoke with Vincent, who Brighton had worked for at a factory in Pretoria, Brighton was arrested on Tuesday morning February 26.

‘Vincent confirmed that he had been told by his other employees that Elliot had been arrested and that they had no further details at this stage. “I got word from one of the guys that works for me that knows Elliot, I believe they arrested him today,” said Vincent.

He went on to confirm that Brighton was indeed an employee at his wood-working factory in Pretoria where he had worked until recently and looked completely healthy the last time he’d reported for duty.

According to Vincent, this was not the first stunt Brighton had been a part of as he’d previously allegedly pretended to be wheelchair-bound so that the pastor could “heal” him in front of the masses. His employer went on to describe him as a very smart man who was unfortunately fond of lying.

Various social media users have also shared old photos featuring Brighton, and it seems he has previously worked with the pastor as his cameraman, among other things

The man who was ‘resurrected’ in viral video has been arrested was last modified: February 27th, 2019 by Reporter