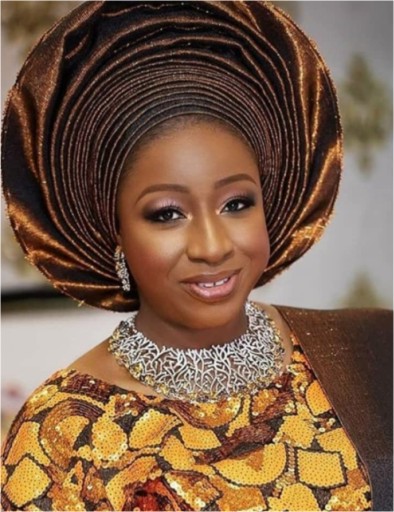 •How She Dazzled @ Her Husbands Coronation

Since His Royal Majesty, Oba Abdulwasiu Omogbolahan Lawal, the 15th Oniru of Iru kingdom was installed 90 days ago, his pretty wife of over 20 years, Oloori Maryam’s fashion statement has been the subject of discussion among many Lagos stylish society women.

Do you ask why? It’s because they can’t just understand how she does it. The ebony pretty Oloori has shown many that she is a Style Queen. She has shown that she is not a novice as far as making fashion statements is concerned.

Just in 90 days, Oloori Maryam has shown many that she couldn’t be pushed back as far as fashion is concerned. Since she made her official appearance as Oloori Oniru on Sunday, 7th of June, 2020, this stylish ebony queen has made her presence felt on the social scene. Many who have visited the palace after she became the queen, testify that Oloori Maryam is one queen who has raised the bar so high for others to emulate.

Though no major party or owambe has been staged, but the palace of Iruland has become a beehive of activity in the last 90 days.

Many ‘A’-list Nigerian celebrity women and men of style stormed the palace to pay homage to the new king and queen in town. If you think Oloori Maryam would just look ordinary, while receiving guests at the palace, you are joking.

The Queen of Iruland always dazzled visitors and guests with her unique fashion statement. She rocked the best of fabrics and only rocked the best of Diamond, Gold and Pearl. The royalty in her, came to the fore and was so obvious as all fabrics she rocked suited her.

The likes of Elsie’s Fabrics, Nickyfabrics, to mention only two are her suppliers. For her makeup in the last 90 days, only Nigerian number 1 makeup artist, Banke Meshida, handled her face beat. She didn’t settle for less. What about her diamond and gold, she rocks only rare gold and diamond.

While many were still talking about her look for her husband’s official coronation, which took palace in June, Oloori Maryam came out in grand style over the weekend as she stepped out looking gorgeous for her hubby’s coronation party. There is no doubt that she has stepped up her fashion game in the last 90 days.

Unlike coronation proper, where she spotted a luxury white lace in June, for the grand reception, she spotted 2 luxury Aso-Oke which sat well on her body. She walked side by side with her hubby, looking regal when she stepped out in champagne gold aso-oke matched with coral iyun mixed with 18-carat gold. The aso-oke was from one of the best in that industry. It was from Jadenron Aso oKe in Lagos. So, also was her 2nd Burgundy Aso-oke. She matched it with 18-carat gold.

Jadenson is also the one who supplied Oba Elegushi and his Queen Aso-Oke. The outfit complemented Oloori Maryam’s ebony skin.

Walking like a queen that she is, there was no doubt that Oloori shares a strong bond with her husband. They were never busy to intermittently chat as the coronation party bubbled.

Perhaps, you don’t know that Oba Abdulwasiu Omogbolahan doesn’t joke with his wife. They have been married for over 20 years and still counting. Their marriage is blessed with a boy and a girl. They are not just a couple, they are also friends. Those who know revealed that their friendship started way back, Police College when they were both in Nigeria Police before they took it to higher level in marriage. To demonstrate intimacy, they have various pet names they call each other. Kabiyesi loves his wife to bone and he doesn’t joke with her. He is a complete family man and a philanthropist. Those who know Kabiyesi and his wife said they didn’t only complement each other in look, but also in behaviour. You can’t enter the Lawal’s house crying and leave same way. You will smile on your way out, said our source.

Oba Abdul Wasiu’s love for his wife became obvious when all members of his squad who are all “AC” (Assistant Commissioners of Police) came to take photographs with Kabiyesi. Kabiyesi was heard calling “where is Maryam?”, she is a member of our set too”. Yes, this is confirmed as Oloori Maryam Lawal was once a Police Officer before she resigned to go into private business. Many of the ACs were her coursemate and they know her right from their Police College days.

What does Oloori Maryam do? She plays big in Oil & Gas. She has filling stations in Lagos, which she has been managing for years. She is said to be a good businesswoman whose business acumen is admired by many. She is very social but she prefers a crowd small.