Home Media #ThrowBackThursday: Story of ‘Big Booty’ African Slave, Sara Baartman Who was Abused by Europeans and Used as a Circus Animal
Media 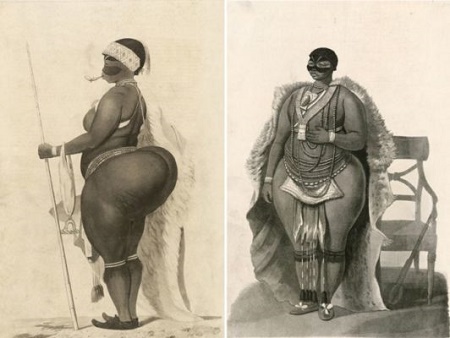 This is the story of a poor African slave who was abused by shameless Europeans for her massive buttocks and used as a circus animal.

On 29 October 1810, Saartjie “Sara” Baartman, a nineteen year old Khoisan woman signed a contract to be taken from Cape Town to London to be exhibited for entertainment purposes. Though she was illiterate, history allegedly claims she signed the contract with an English ship surgeon named William Dunlop who was a friend to Pieter Willem Cezar and Hendrik Cezar. Pieter Willem Cezar had bought Sara Baartman as a slave at sixteen and she worked for Pieter’s brother, Hendrik. It was here that she was named Saartjie, the Dutch form of Sara.
The history of colonialism was so unfair to her that she was stripped of her identity and her bodily integrity. Her story is the full representation of the evils of a hybrid of colonialism, slavery, racism and sexism. The Europeans even disrespected her humanity to the extent of displaying her brain, skeleton and sexual organs in a Paris museum until 1974. She only got a dignified burial almost two centuries after her death, in 2002.
The woman who lost everything…even her name
Sara Baartman was born to a Gonaquasub group of the KhoiKhoi in 1789 at the Gamtoos River which is found in South Africa’s Eastern Cape. Her first major loss was that of her mother who died when Sara was just two and her father, a cattle driver died when she reached adolescence. She got married to a Khoikhoi drummer and had a child together. The child died soon after.
Death
With the coming of colonialism, came conflicts between the natives and the settlers. Her husband was murdered by the Dutch colonists, her first loss to a system that would take her life from her. After working for the Dutch in Cape Town, she allegedly signed the contract which would take her to London to perform. What made her special? BBC says she had what was called “steatopygia”, resulting in extremely protuberant buttocks due to a build-up of fat.
What she had, most women can only dream of but at this point, the Europeans were eager to gobble up anything that asserted their superiority and somehow, Baartman was used in that narrative. They used her as a confirmation of the dark skinned people’s inferiority; their insatiable appetite for sex as shown by the size of their buttocks and their genitalia. Promoters even described her genitals as resembling the skin that hangs from a turkey’s throat.
Baartman was first displayed in Piccadilly where descriptions of her treatment reported how she was exhibited on a “stage two feet high, along which she was led by her keeper and exhibited like a wild beast, being obliged to walk, stand or sit as he ordered”. The Guardian rightly says, “The crowd viewed her as little different from an animal.” Like an animal, she was sold four years later to Paris where she was under the control of a wild animal exhibitor in a travelling circus. That she was now a part of his “show animals” leaves a bad taste in the mouth. It is in Paris that Napoleon’s surgeon, George Cuvier saw her and developed a “scientific interest”.
His idea of science was proving the superiority of the white people. In fact, he described Sara’s movements as having “something brusque and capricious about them that recalled those of a monkey”. Men like Cuvier propounded the idea of a Homo Sapiens Monstrous; more ape than human, devoid of the intelligence and emotional capabilities the whites were endowed with.
The Edinburgh Review in 1863 is famed for writing, “There is no vast difference between the intelligence of a Bosjesman and that of an oran-utan, and that the difference is far greater between Descartes or Homer and the Hottentot than between the stupid Hottentot and the ape.” Such depiction of Africans (particularly the Khoisan) as the most developed ape but least developed human was common.
When Baartman died of what is presumed to be pneumonia, syphilis and alcoholism, George Cuvier made a plaster cast of her body before dissecting it. Her preserved brain and genitals were placed in jars and displayed at the Museum of Man in Paris. They were only removed in 1974 and she got a proper burial 187 years after her death. Her story is so emotional that when the world heard of Beyonce’s plan to write and star in a movie based on Baartman’s life, there was a massive backlash.
Jean Burgess, a chief from the Khoikhoi group Baartman hailed from is on record for saying Beyonce lacked “the basic human dignity to be worthy of writing Sara’s story, let alone playing the part”.
Similarly, a Kim Kardashian photo-shoot which mimicked contemporary drawings of Baartman was widely criticised. The looks of black women are a thing of politics with body-shaming and commodification forming the lens through which they are viewed.
Baartman probably suffered the worst forms of subjugation and dehumanisation at the hands of Europeans. This culture of using looks to perpetuate black women oppression should come to an end. Baartman’s story should not be re-enacted in modern society two centuries after her unfortunate death.
–
–
Source: AfricanExponent
#ThrowBackThursday: Story of ‘Big Booty’ African Slave, Sara Baartman Who was Abused by Europeans and Used as a Circus Animal was last modified: May 22nd, 2017 by Arinze Ago

Why More Buildings May Collapse in Lagos...