Home Business There Are Times I Forget I Am A Woman Nigeria Stock Exchange Ex-DG, NDI OKEREKE-ONYUIKE
Business

There Are Times I Forget I Am A Woman Nigeria Stock Exchange Ex-DG, NDI OKEREKE-ONYUIKE 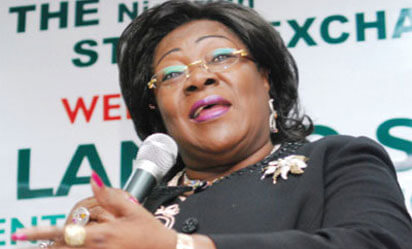 Prof. Ndi Okereke-Onyiuke, OON was the Chief Executive Officer, Director-General, and Council Member of the Nigerian Stock Exchange.Many people got to know Ndi Okereke-Onyiuke especially as she was a permanent fixture on Nigeria’s corporate scene for a long time. She is a regular figure at corporate events and when she attends social events, it’s always the ‘A’ list ones. Prof Ndidi Okereke stepped out recently at a wedding in Lagos and it was a reunion for her and friends whom she has not seen in a long time.

At the event, City People’s Society Editor, TAYO FAJORIN OYEDIJI, caught up with this doyen of the corporate world, who spoke about her life, career and marriage of 39 years.

How do you feel today being here to celebrate with the Okunowos and Oyinlolas?

The couple’s parents are my good friends. I belong to both families. It is a good thing to marry into families who know one another. I can not but be here today because they are my people celebrating their children. The parents know one another and the children grew up to know each other as well. I feel excited today and it is God that made it possible for them to be married. They will have a beautiful life together . I pray for them, they will have a wonderful marriage together, I know they will, you can see what is happening in this hall today, filled up with important dignatries. Have you seen such a gathering in recent times? Because me I have not o! Its because the couple is of good behaviour and their parents too are also good. Everybody that is who is who is here today. It is a wonderful time we are having here. I have seen many friends, we have not seen one another for about 5 or 6 years, we are seeing today. So, it is like a reunion of friends and relations who Bukky Okunowo brought together it is wonderful.

You are not Yoruba, but it seems you have many friends across, ethnic lines? how has that been easy for you?

Me o! I am one of those few people who don’t believe in Hausa, Ibo or Yoruba stuff because my mother is from Rivers and my father is from Imo State..I grew up in Rivers State then I went to the US. So all I know in the US is that everybody is the same, I don’t know the difference between ethnic groups, so I have more Yoruba friends than easterners because when I came back from United States, I have been working in Lagos, so I have millions of friends who are Yoruba. At least, 80 percent of my friends are Yoruba from Lagos and other Yoruba cities.I worked with them, I speak with them, so I don’t see myself different from them, atleast, you can see today now,I even dressed as the Yoruba people and I have been doing this for a while,you can see these days too in Nigeria that everyone dresses across tribal lines at parties, so I have more of Yoruba people around me.

As a woman, who has been married for a long while, what is your advice for the newly wed?

I wish them a fantastic union. Their parents have a very good marriage, so they will surely have a good marriage because they came from good homes and their parents are friends. They will be advising them and putting them through strange ground. The most important of all is God, and their parents are godly, so with the Christian values they both have, God will make it work for them as far as they make Him their uppermost priority by putting God first.

You were one of the powerful women during your reign as the NSE DG, How were you able to get to that top rung?

If you are in a powerful position where you have to supervise almost the whole economy,where all the banks are quoted on the stock exchange, all the stock broking firms, investment houses, real estate people, oil and gas companies, you need to thread softly, If you are in the midst of men, you have to make sure you are friendly with all of them. I worked that way and made sure it worked. Many at times I actually forgot I am a woman because everyday of my life I was surrounded by men, so you see, as a woman, what you don’t do is antagonise men, or show them you have power of office to deal with them, but rather show them friendship, but at the same time stay firm and do your work accordingly, so I got along with all of them.

How were you able to run the office and recorded all those achievements?

I worked in the New York Stock Exchange before I came to Nigeria, so I was already used to working with men. It was what I said earlier that worked for me. I looked at the way everybody relate at the stock exchange over there. If you come to the trading floor, you know everybody by his first name and we call everyone by first name. What I did here that I am proud of was that I brought many women into the financial system, I talked to them, I counselled them, and also talked about how to handle men.

It was difficult, both the junior ones and a few of them who are managers, every month I used my personal money to have lunch with them. Then I called their bosses to say we are going to have women meeting, our monthly meeting. So, we would have lunch and from there we would discuss, from there, I got to speak with all of them, so we always used the opportunity to share problems women faced in their respective offices.

Both the ones who have male bosses and a few, who supervised men. I really accomplished that among women bankers, insurers, corporate individuals and those in the oil sectors etc. because I set the example by behaving well, so women were not afraid anymore among men because when I came, there was hardly any female Chief Executive. I can’t remember well,  but because I laid the example and never let it get into my head, I just saw it as a call to serve and it was same discipline that I put together for them.

How have you been able to sustain your marriage for this long?

It is God and maybe because my marriage is international. My husband has a very good job in the US and I also have a good job here even when I took it up when it was most challenging, I took the job upon myself, we had an understanding, He comes often and I go often. Atleast, every time. So, we make sure we both make it work.

How long have you been married and what was the attraction?

I have been married since 1978.that makes it 39 years. We met at a union of Nigerian students in New York. My husband lives in New Jersey so one day I was the one playing host and he felt how could such a girl be working in the Stock Exchange. He is down to earth and we exchanged contacts, the attraction was there and we started going out together and here we are today.

There Are Times I Forget I Am A Woman Nigeria Stock Exchange Ex-DG, NDI OKEREKE-ONYUIKE was last modified: July 3rd, 2017 by Tayo Oyediji

How Micro Finance Banks Will Benefit From...