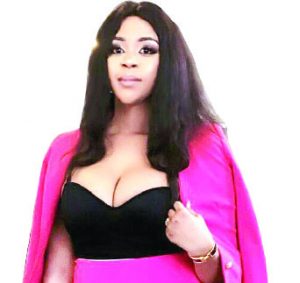 According to the actress, she started out as a model before hitting it big with a cameo role on popular TV series, Tinsel.

She told TS Weekend: “I have being in the shadows for years. I actually started out as a model. Then I went to Tinsel audition and got a role. I played the role of Ego, Amaka Ade Williams’s friend in the TV series.  Adding to that, I’m also a commercial and business cabin crew. I have enjoyed the two industries; I still hope to go into movies and production proper. I love unconventional things and want to be like them, not every day suit and tie.”

On sexual harassments and those she admires in Nollywood, the pretty actress said: “I admire and love Ramsey Nouah all the time. He is so professional and can’t be predicted. No crush on him though, because he looks like my younger brother. Whenever I see him, I see my younger brother in him.

“Sexual harassment is one thing we should try to tackle in this industry. I always warn the ladies; do not sell out your integrity, because if you do, you are putting a whole lot of others coming after you on the line. I have been sexually harassed, yes! But I turned them all down. It’s not easy resisting these things as a young lady who wants to get somewhere in life, but determination and self confidence would pave better ways for you. Get your principles right. As long as you have the talent, you don’t have to sell your integrity to prove a point.”