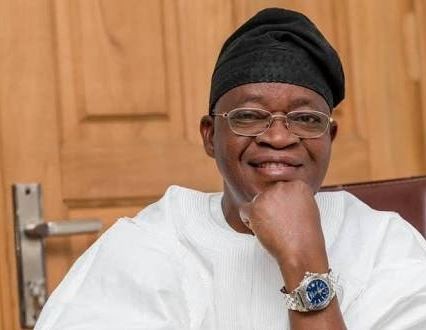 It is no longer news that Alhaji Adegboyega Oyetola is the Osun APC candidate for the forthcoming governorship race in Osun State. He is the Chief of Staff to Gov. Rauf Aregbesola and a loyal party member.

A few days ago, when Asiwaju Bola Ahmed Tinubu went to campaign in Osun for Oyetola, he visited the palace of the Ataoja of Osogbo. And during his speech, he revealed a lot about the Oyetola and why he would have his support any day.

Asiwaju recalled how he and other party leaders picked on Aregbesola years back to come and run Osun State. “Not many know a lot about Rauf Aregbesola. He is someone to be proud of. We trained him in Lagos. He was a Commissioner under me in Lagos. We noticed he was very brilliant then and he knew his job. When we saw all these landmark achievements he made in Lagos, we decided he should go back home, to remodel Osun. No Governor in the history of Osun has done a lot on infrastructure like Aregbesola”.

“We would have asked Rauf to continue because he has done well in Osun, but we have also chosen another son of the soil, Gboyega Oyetola. We have handed him over to you. He is a trustworthy person. He is a bit quiet, but his brain is an encyclopedia of finance. He is a man that would not take a bribe from you and he won’t steal your money. If he wanted money he would have remained in Lagos. You don’t have his money in Osun. I am not abusing you. People can be saying Jagaban has brought someone to impose on them in Osun, but I asked them how much do you even have? Kabiesi! I don’t want to say this in your face, but you don’t have my money. But I want to do my best in this town to help you. I want some of your children to be employed. We want to create employment here. These are things that can promote a state. When we identify someone who has brains we usually ask him or her to go back home to help his community”.

“This is my prayer and that of many of us. That is what Oyetola is. He has brought fortune; he has brought experience.”

“If there is a way or if the Constitution allows us, I would have still presented Rauf as Governor, but the Constitution has denied us of that. But we thank God because when he, the Governor wanted to choose a successor, he chose Gboyega. He is one of the most humble, successful, most brilliant in education. He has a private successful business. You can trust him. I can trust Oyetola. I trusted him when I was going into exile. I kept my investment with him; all my records, my landed properties, my shares. I spent 5 years in exile fighting Abacha. The day I came back from exile, he brought 3 briefcases to me. The 3 briefcases were filled with documents; my documents did not miss a single copy. Oyetola did not convert one plot of land to his, neither did he hide one document. Somebody like him is scarce. He doesn’t talk much.”

“Talk of one person who loves Osun State and wants development for the state, Oyetola is No 1. He is successful. He performs. He is a serious-minded person and has great vision.”

When Oyetola turned 60 a few years back, Tinubu also eulogised him. “I am proud to count Oyetola as one of the exceptionally principled and dedicated progressives who are in the service of the people, toiling day and night, supporting an indefatigable Governor and showing uncommon dedication to the business of the State of Osun, in particular, and the progressive cause, in general.”

“Gboyega is not only a Comrade in the struggle but also a longstanding brother who has remained a loyal partner in the struggle. Having known him for about five decades out of the 6 now being celebrated, I am not surprised by the dedication and passion he has brought to bear on his latest assignment as the Chief of Staff to the Governor of the State of Osun. He has always been a consistently principled, focused, insightful and loyal friend and comrade.”

“I have no doubt whatsoever that when the history of the progressive movement and the new generation of leaders in Nigeria is written, Adegboyega Oyetola will be singled out for celebration. He remains a truthful team player.”

“In his earlier years, he was always persistent in achieving success. No wonder in his service to the good people of the State of Osun, he has shown himself as one of the flag-bearers who are not unmindful of the heavy burden, responsibility and huge expectations of our people, young and old, man and woman, able and disabled. He has shown himself as not unmindful of the misery and poverty that the generality of our people have had to endure over the years. And, in line with the commands of the prophets of old, he has demonstrated his commitment to join the Governor of the State of Osun to lessen the burden of our people and to alleviate poverty by providing jobs for our youths, houses, secure homes, water, good roads and creating efficient mass transportation system, industrial development and providing life more abundant for our people.”

“Adegboyega Oyetola is the quintessential Chief of Staff.

I know that a Chief of Staff must be trustworthy, able to be relied on as honest or truthful. This is who Gboyega is. A dutiful official who has shown himself as reliable, dependable, honest, honorable, upright, principled, true, truthful, ethical, virtuous, and above all incorruptible.”

“I also know that a good Chief of Staff must be astute, having or showing an ability to accurately assess situations and people and turn this to the advantage of the state. In Gboyega, the Governor of the State of Osun found a shrewd, adroit, intuitive, perceptive, insightful, incisive, sagacious and wise counselor.”

“Also, an effective Chief of Staff must be consummate, showing a high degree of skill and flair. In this regard, Gboyega has proven himself accomplished, proficient, skillful, skilled, masterly, talented, gifted, polished, and practiced in the art of governance and human relations.”

“Adegboyega Oyetola embodies the vision of the progressives that leadership is not about the spoils of office or ethnic loyalties but about ideas, the prime idea being that democratic governance must be transparently fair and must deliver tangible benefits to the people. In his disposition and official pursuits, one sees in Gboyega a progressive who is committed to our vision of the promotion of leaders whose democratic credentials are unimpeachable and to the elevation to leadership of persons who are not men of mere words but men who have toiled in office for the sake of the people and who have performed so exceptionally well that they can raise their heads up high and walk confidently among the people of this country.”

“I am happy to join in celebrating Gboyega who belongs to that class and generation of leaders that the citizens admire for being exceptionally dedicated and passionate about building their country against all odds; for facing various challenges with bravery and for infecting their colleagues and countrymen with action, commitment, enthusiasm, integrity and eternal optimism.”

“Gboyega belongs to that breed of leaders who work quietly and behind the scenes to bring positive and tangible changes to the people and to the political system and the society at large without engaging in loud and meaningless rhetoric.”

“He is that high officer who respects the people’s true cultural and religious differences while promoting mutual and peaceful co-existence in an atmosphere providing for the protection of rights and attainment of justice; he is that adviser who promotes the provision of caring governance, effective leadership and exemplary deeds of integrity in office while always being on the move for new, modern and positive ideas from all quarters.”

“Societies do not always have the benefit of being led by wise officials and, in this part of the world, we have been saddled, for so long, with many leaders and officials who are only of average intellectual capacity and who lack the innate charismatic component required to conceive and execute meaningful policies.”

“Gboyega is one of the astute officials bucking that trend. I note with pride his accomplishments in the private sector and his admirable record of service in the State of Osun. I am delighted to join in celebrating him on the occasion of his 60th birthday. I wish my dear friend and brother many more years of service to God and humanity in good health and in constant remembrance of A.D Benjamin’s observation that “a life devoted to service is angelic and destined for greatness”.

“This is a tribute to say thank you to you, Gboyega for being such a devoted and loyal member of the family of progressives.”