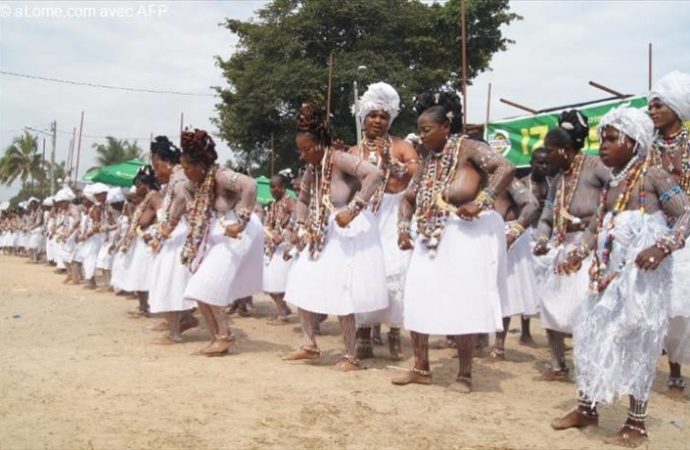 The voodoo follower stood bare-chested with beads around his neck in the centre of the public square in B, a working class district of Togo’s capital, Lome.

A dozen priests surrounded him as he made incantations, threw soil and water, and gave an offering to the gods. In the silence, a ram and a cockerel were burnt alive.

“It’s over, human blood must not flow again on the land of our ancestors after the purification ceremony for the country,” the follower said.

Twenty priestesses, naked from the waist up, sang and danced before spraying the watching crowd with water “blessed” by the divinities from voodoo convents.

“A lot of ceremonies have taken place in convents. The country is now purified,” said a follower of the thunder god Hebiosso.

The government announced last week that Christian, Islamic and voodoo “purification ceremonies” would be held to purge Togo of its violent past and promote reconciliation.

The West African nation was rocked by political unrest during presidential elections in 2005, which were won by Faure Gnassingbe, who remains in power.

There is no official death toll from the clashes, but a group close to the government has said 105 were killed while the opposition put the figure at more than 800.

The United Nations believes between 400 and 500 people died.

Ceremonies were due to be held in mosques at Friday prayers and also in churches on Sunday.

In Lome, about 100 voodoo high priests and traditional chiefs were at the rituals at the lagoon’s edge in B.

“They are oracles who showed us the banks of this lagoon for the ceremonies. And we all know what happened in this lagoon in the past,” said Togbui Gnagblondjro III, the head of the national confederation of voodoo priests of Togo.

On April 11, 1991, 28 bodies were pulled out of the water in B the day after an opposition demonstration.

The protesters had accused the military of massacring demonstrators at night and throwing their bodies into the lagoon.

The government brushed off the accusation and claimed the incident had been staged with bodies taken from the city mortuary.

“Ceremonies took place next to this lagoon to appease the spirits of the people and all of this country’s children who spilled their blood,” said Gnagblondjro.

“In Africa there always has to be purification ceremonies after violent deaths,” said the voodoo chief, in traditional robes and traditional hat.

“After this ceremony, human blood must no longer flow. The oracles are asking the forces of law and order to stop firing on people.

“They are also requesting the people not to provoke them.”

Togo set up a truth, justice and reconciliation commission to shed light on political violence between 1958 – when France announced that it would grant independence – and 2005, and study ways of compensating victims.

The current president’s father, Gnassingbe Eyadema, led Togo with an iron fist from 1967 until his death in 2005.

In 2011 the commission held a series of private hearings, which allowed it to identify 22 415 victims eligible for payment.

A total of 2 475 were paid from an allocation of $3.4m. More are expected to be paid after the purification ceremonies, the government said.

No one has ever been tried and convicted for the violence in 2005, which has led to criticism from human rights and opposition groups.

Gnassingbe has been repeatedly urged to end impunity.

Francis Pedro Amuzu, from the political bureau of the main opposition National Alliance for Change (ANC) party, said it had asked its members to stay away from the ceremonies.

He called the events “a con-trick”, adding: “The ‘executioners’ must first recognise that they have committed crimes and ask the people for forgiveness.”

Togo purges its violent past with voodoo ceremonies was last modified: July 7th, 2017 by Arinze Ago