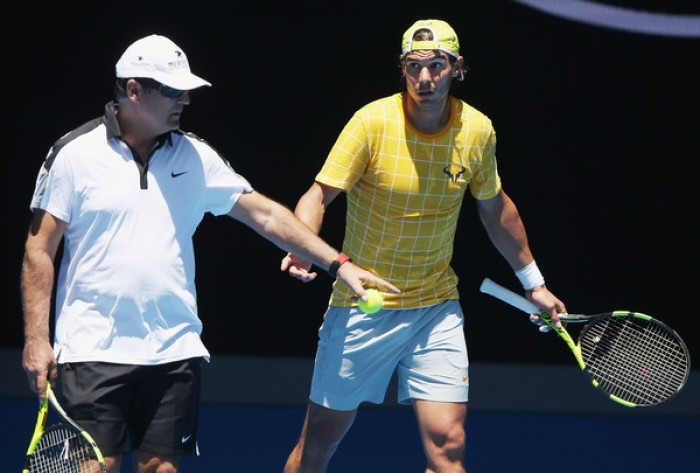 Rafael Nadal’s uncle, Toni Nadal, will step down as his coach after this year’s ATP Tour, as he feels he has been sidelined by other figures in the player’s entourage, he told an Italian tennis magazine.
The 55-year-old has been with the 14-times grand slam champion since before the Spaniard broke into the big-time by winning the French Open as a teenager in 2005.
Two weeks after watching his nephew lose in five sets to Roger Federer in the Australian Open final, Toni Nadal told Il Tennis Italiano website that after this season he wants to concentrate on training emerging players.
“From next year I will no longer follow Rafael on the circuit but will dedicate myself exclusively to our academy,” he said, referring to the Rafa Nadal Academy which opened last October in Mallorca.
“The relationship with my nephew has always been excellent, in all these years we have never had periods of crisis,” he said, but added that he has felt increasingly sidelined by Nadal’s manager Carlos Costa and the player’s father.
“The truth is that every year I am making fewer decisions, to the point that I won’t be deciding anything any more!”
Former World number one and fellow Mallorcan Carlos Moya joined Nadal’s coaching staff this season, hoping to help revive the player’s career after two injury-plagued years.
Nadal, without a grand slam title since winning the French Open for a ninth time in 2014, withdrew from last year’s tournament and missed Wimbledon because of a wrist injury.

At 50, I Wish I Could Have Done More, Marketing & Sales Guru, KOLA OYEYEMI Birthday Interview