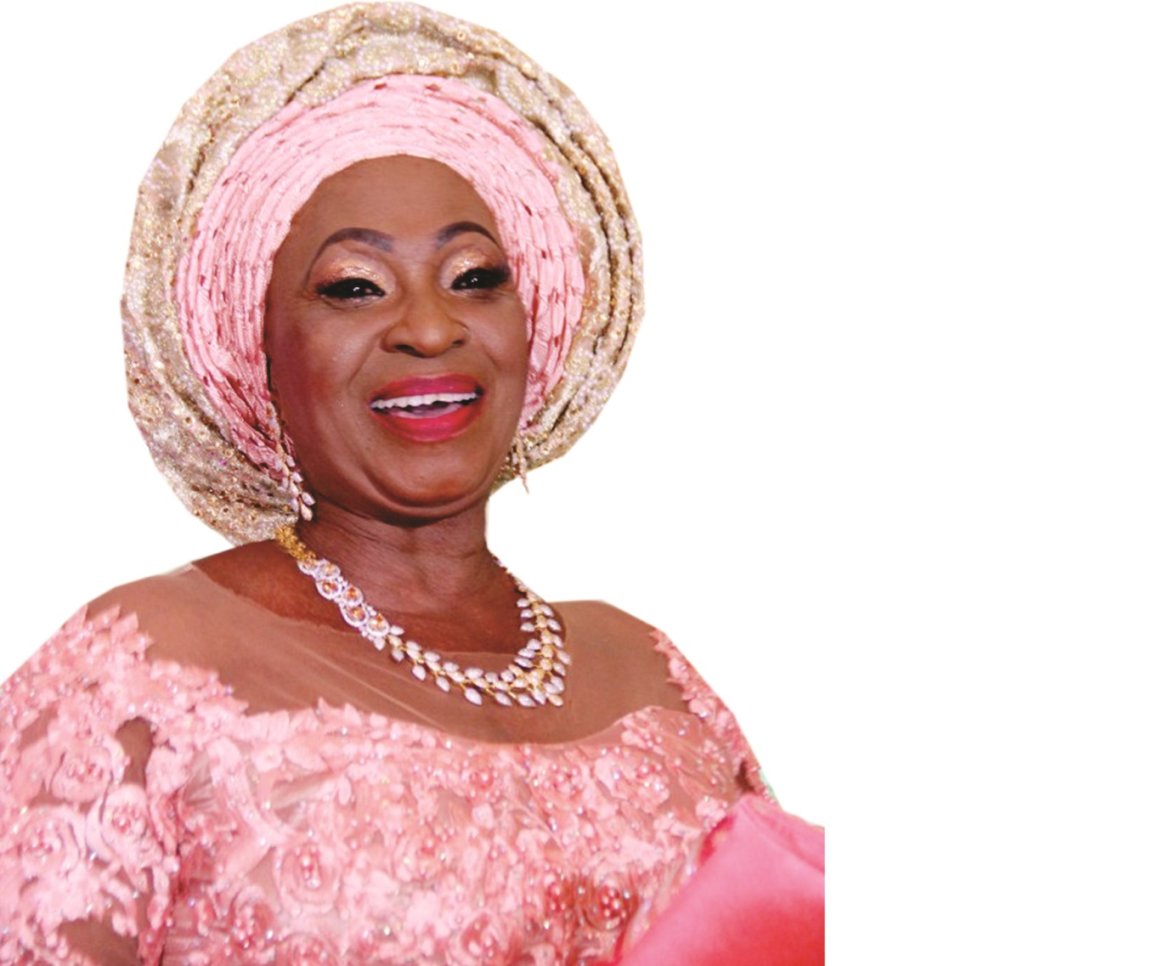 On Sunday, 23rd, July, 2017, popular Lagos society woman, Folu Adeniyi-Jones clocked 60 To mark the day, this woman who is the Ceo of Top-shop, a popular shoe dealer, gathered family and friends to a classy thanksgiving at her church RCCG DOMINION Sanctuary, Acme Road, Ogba, while a classy reception later took place at the spacious Batten House, Plot A2 MKO Abiola Garden road, Alausa, Ikeja. The event paraded many Lagos society women who came to show love and solidarity to the celebrator, Folu. City People’s Assistant Society Editor,  ABIOLA  ORISILE was at the event.

THE CELEBRANT, FULL OF THANKS

Sighting Mrs. Folu Adeniyi-Jones on her 60th birthday, one could see very clearly how grateful she is to see the day. This was why this ebony black society woman led friends and well wishers to the presence of the Lord at her church as early as 9 a.m. to join her in thanking the Lord first for he has done so much for her. The birthday ‘Gal‘ looking pretty in a royal blue lace matched with choice jewellery danced in with her children during the thanksgiving.

The thanksgiving lasted for few hours before the guests moved in train to Batten Hall where the grand reception took place.  Mrs. Folu was the cynosure of all eyes when she danced in again in a unique coral lace matched with a well wrapped coral and gold aso-oke which was done by “Victor Gele“. Her beautiful make-up though was subtle but there was no doubt that the make-over suited her pretty well. She was full of joy as she danced in with her two daughters.

Many of the guests couldn’t help but notice her two pretty daughters who danced in with her during the reception. They were clad in the same Monotone lace and headgear with her. Tanwa Adeniyi-Jones and Temilade Adeniyi Jones were fully on ground to show love to their mother who they describe as their Pillar. Though, Olubunmi Owolabi, Mrs. Folu’s second child, who is based in Ireland couldn’t make the event, but she sent her prayers too. Temilade spoke glowingly of her mother during the reception and expressed how much they appreciate her Motherly love. She explained that they, the children, could be naughty at times, but there is no doubt that all her affection did not go unnoticed.

FOLU PUBLICLY APPRECIATES HER HUBBY, AFOLABI FOR BEING A STRONG PILLAR

Just as the popular saying that Behind every successful man, there must be a woman, so is the case of the celebrator, Mrs Folu Adeniyi-Jones and her husband, Otunba Afolabi Sodunke popularly “Afo Gurantor“.  He is a very strong pillar behind his adorable wife. This was brought to the fore by Mrs Folu herself who spoke so glowingly of him during her Vote of thanks. Her words: “I want to use this medium to appreciate my darling husband, Afolabi. Thank you so much for being there for me. He is always the one I will call when I am at cross roads. He is always available to help me out in times of need. I call him my ATM. Thanks for being there for me “Oko Mi“.

In case you don’t know who Folu Top Shop is; perhaps we should fill you in about her. Though people hardly know her by her name but she is very synonymous with her brand name. Top Shop is one of the leading shoe shops patronised by some of the biggest celebrities in Lagos. She has dominated the scene for over 30years selling shoes to A-list celebs. Though she has her head office in Ikeja but she has her shop located at many strategic places in Lagos. She named her shop after the Popular “TOP Shop in United Kingdom.

If there is anybody whose role was so significant at Folu Adeniyi-Jones’ birthday, it is no other than Lagos society woman, Radeke Kupoluyi, the CEO OF Radek Boutique and pretty wife of popular Lagos publisher, Biodun Kupoluyi. The success of the birthday was also accredited to her by the celebrator who revealed as much during her speech at the grand reception. “I want to specially thank my Aburo, Radek, who put everything together to make sure that the event is grand. Thank you so much my sister“. Though Radek settled for a simple Iro and Buba but her choice of jewellery complemented her attire. Her beautiful make-up was perfect till the event ended late at night. Her best friend, Ireti Odulaja, the CEO of Rettes Fashion was all out because of Radeke. Among her guests at the event were Mrs. Oke Gbemi, Omotola Iredia, Mrs Gbemi Ariyibi Oke(CEO of Olagbemms ltd), Omotunde Dosunmu, Kemi Sosan, Toni Igbarola( fortunate Table Carpet boss), Layi Momotola, Kola Paregrino, Otunba Lekan Lawal and many others.

The Olu Itori, Oba Abdul Fatai Akamo and his best friend, Oba Kolawole Sowemimo were also in attendance. They were the guests of Folu Adeniyi Jones’ husband, Afolabi. This Ogun top Monarchs who have been close for over 20years and who enjoy each other’s company came in during the reception.  Though Oba Kolawole came in first, but he was later joined by Olu of Itori. Their two Oloris, Olori Barakat Akamo and Olori Toyin Sowemi couldn’t make the event as they were at a naming ceremony.

SEYE KEHINDE WAS THE CHAIRMAN OF THE EVENT

Seye Kehinde, the Chairman and Ceo of the leading soft sell magazine in Nigeria, City People Weekly Magazine, was the chairman of the occasion. Though it took him by surprise as it was the celebrator’s choice but the ever ready Journalist in his speech spoke on the significance of birthdays and explained that 60 years is a milestone in which one has to look back and thank God for what he has done in one’s life.

Have you seen Mrs. Bukola Faleke, the pretty wife of Kogi state House of Representative, Hon James Faleke wife of late? If you haven’t, permit us to tell you that it may be difficult for you to recognise her as she has shed a great deal of weight. And she’s looking the better and prettier for it, sporting a taller and sexy look. Believe it or not, Mrs. Bukola Faleke can pass for a 20years old lady. She was one of the guests of Radeke Kupoluyi. They have been very close for over 20years, right from their days at Yaba Tech.

The Iyaloja of Idumota Market, Alhaja Risi Odumosu and CEO of Risbod Textile was one of the numerous Lagos society women who honoured Topshot. She came in during the reception and sat at Lagos society woman, Ayo Julius’ table. Though she was not in the coral and gold lace aso-ebi but she settled for a white, unique attire which sat well on her huge frame. Risi Odumosun’s best friend, Mrs. Rose Osinpitan missed a whole lot as she left her friend to attend the party alone.

AYO JULIUS GETS HER GROOVE BACK

Lagos Society Woman, Ayo Julius has got her groove back. Yes, this is authoritative as the Yeye Bewaji who has been mourning her elder brother whom she lost to the cold hands of death several weeks ago was sighted at the party. Looking pretty as ever in a flowing boubou, she spent many hours with her group of friends, Mrs. Ayodele, Alhaja Amope Otolorin, Iya Sala, Yeye Tayo Oshinowo, Lady B Custard and others.

The chairman of Ado-Odo Ota Local Government, Hon Adenji was the one in charge of the cutting of the cake. The son of former chairman of Ogun APC, Hon Roqeeb Adeniji who looked good in Ogun Adire, prayed for the celebrator while the cake was cut after counting of 1 to 60. 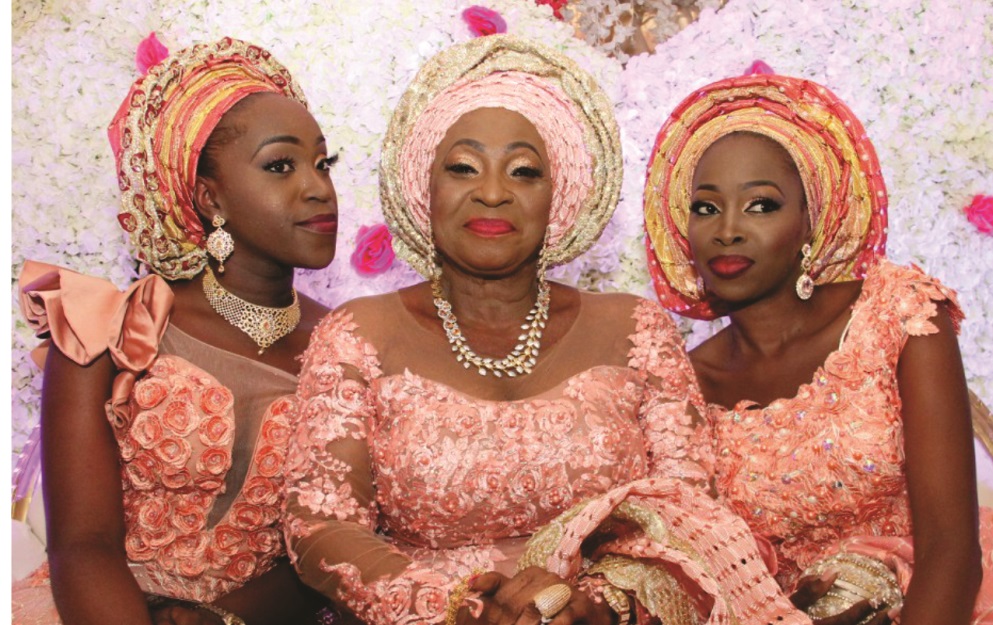 There is no party like Lagos Party. So the saying goes. This is because Lagos parties come with its ‘Paparazi’ which entails picking of aso-ebi and gele. Some even go as far as picking aso-ijo which were for selected friends. This is also the case for Lagos society woman, Mrs. Folu Adeniyi-Jones who celebrated her 60th birthday in grand style. Not only did she make sure her birthday remain unforgettable in the minds of those who attended, she picked a special aso-ebi which is coral and gold and it is sold for 35k and 40k respectively.

The double organza aso-ebi was worn by many Lagos society women who sewed it into unique styles while they adorned it with quality jewellery.  We couldn‘t help but notice Taibat Elemosho fondly called Montai, Hon Adijat Oladipupo and Alhaja Risi Odunmosu. They were not clad in coral colour aso-ebi, but to say that they stood out will be an understatement. Hon. Adijat settled for a black fitted dress which was fully embellished with diamond stone. Hon Adijat is surely a fashion ‘pro’ for rocking it with the coral headgear that was picked as aso-ebi. She didn’t get it wrong just like Alhaja Risikat Odumosu, the Iyaloja of Idumota market. She was the focus of attention in her white lace matched with a white headgear. So also is Montai, who rocked the event with her new slim figure.

You can call her “Iya Meto“(The coordinator). We are talking about Radeke Kupoluyi, the Ceo of Radek Boutique in Alade. She surely knows how to make heads turn at parties. Though she settled for “Oleku“ iro and buba but her choice of jewellery got a ‘wow’ effect from people. Kudos to her make-up artist, despite the fact that she was the one who coordinated the event, she still looked fresh as ever. She enjoyed the event with her best friend, Ireti Odulaja of Relters fashion, Mrs. Oke Gbemi, Omotola Iredia, Mrs Gbemi Olagbemms, Kemi Sosan and a host of others.

Faith Band was in charge of music. He made sure many of the guests were on their feet dancing throughout the event. Decoration was handled by Dee‘s Esotico Events, while food was by PSC catering and Dee‘s Esotico Catering. At Folu birthday, Late Gbenga Adeboye resurrected because the MC was Akin Olagbade , an African Magic Presenter who talks exactly like Late Gbenga Adeboye.