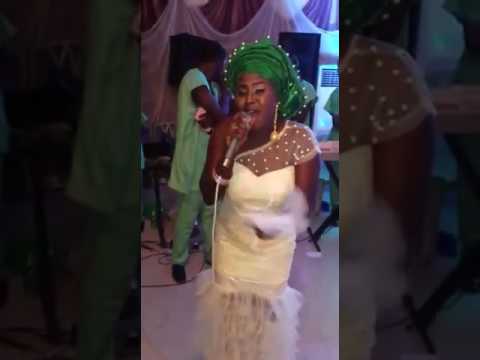 Some call her Oluwatosin Ojetola. Others call her Tosin Ojiji. And there are others who simply call her Ojiji Eledumare which is the name of her band. Tosin is the young lady who is currently making waves in the Juju music industry. She is young and talented and she is currently rocking the Juju music scene in Nigeria. Oluwatosin Ojetola is the one everybody is talking about right now. She is in high demand for shows. And she sings fast paced Gospel juju music that takes you off your seat on to the dance floor to dance each time you listen to her music.

She performs at naming ceremonies, birthdays, wedding, housing warming and at concerts. This pretty female singer will launch her new album next week.

That she is in high demand now is understandable. She did not just spring out from the blues. She has paid her dues. She has been playing music for over 10 years. And she had played with so many artistes like Sefiu Alao, Atawewe, Dare Melody, Nabi, Mega 99, Titi Oguntoyinbo. Musiliu Haruna Ishola, Ayo Balogun, Obesere, Ola Johnson. It was after years of playing with them she set up her own.

Tosin Ojiji has just completed work on her 1st album which she calls OLUWATOSIN. “The album is an album I have done to thank God for my success in music (Aseyori). It is Gospel all the way. It is made up of 4 danceable tracks of solid Gospel Juju. I am releasing 2 albums at a go. I am adding another album to this Oluwatosin album. It is made up of Live play. I praise sang in this one”.

How did she start music? “It was from the church,” she explained. I have been singing since childhood. “I have always been a member of the choir at United Apostolic Church in Oshodi from childhood. At the time she started out as a kid, her dad and mum supported her. Her dad was the head of the church then at UAC Oshodi. He later went ahead to set up his own UAC church along Airport Road.

Her dad is a prophet and mum a prophetess. Though she is from Modakeke in Ile-Ife, Osun State, she grew up in Lagos. She also schooled in Lagos. She went to Investors Private School, Oshodi for her primary school, and Ewutuntun Grammar School, Oshodi for her secondary school education. She studied Business Administration at the Lagos annex of the Olabisi Onabanjo University.

In the music industry, she looks up to some other artistes like Ambassador Segun Nabi, Titi Oguntoyinbo, Mega 99, and Queen Ayo Balogun, she has her own band made up of over 15 band members (male and female). She set up her band after she was told in church to set up her own band. She is a member of AJUMS.

Her church members have also been very supportive. She is a member of the Cherubim & Seraphim Movement (Ayo ni ooo), Victory District, Alagbado. It is a very big church.