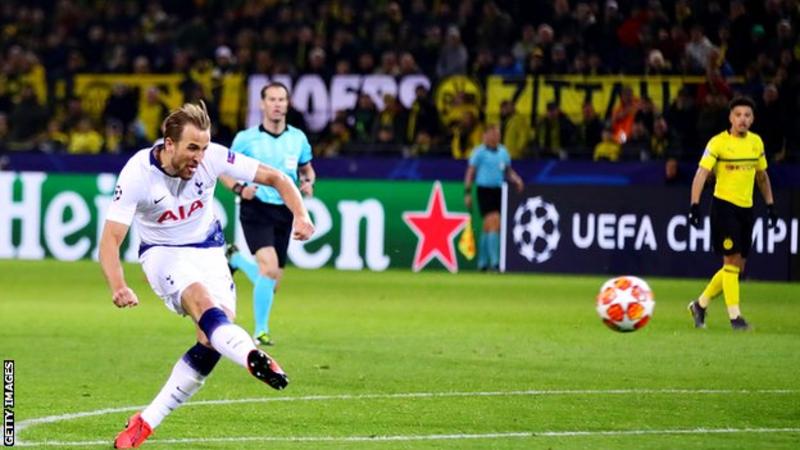 Tottenham eased past Borussia Dortmund to reach the Champions League quarter-finals for the first time since 2011 as Harry Kane became the club’s top scorer in European competition.

Leading 3-0 from the first leg, Spurs were forced to survive a first-half barrage from the Bundesliga leaders in the crackling atmosphere of the Westfalenstadion.

But Kane’s intervention just after half-time ensured a comfortable second period in which the hosts failed to register a shot on target.

Latching on to Moussa Sissoko’s pass, the England captain clinically lifted the ball past home goalkeeper Roman Burki into the right corner.

It was Kane’s first effort on goal and confirmed a 4-0 aggregate win for a Tottenham side that defended resolutely throughout.

Kane’s 24th European goal moves him one clear of the club record he previously shared with Jermain Defoe.

The draw for the quarter-finals takes place on Friday, 15 March.

Mauricio Pochettino’s Spurs side have kept just one clean sheet in the Premier League in 2019, but they looked solid in Germany after deploying the same three-man defence that helped them to a commanding first-leg lead.

Jan Vertonghen’s 10th-minute tackle on Marco Reus exemplified their early resolve. Timing his challenge to perfection, the Belgian nipped the ball away from the Dortmund attacker who had broken clear inside the area.

When Dortmund did break through, Spurs goalkeeper Hugo Lloris made brilliant saves from Reus, Julian Weigl Mario Gotze and Jadon Sancho, while Weigl was denied a second time by a superb Ben Davies block.

Dortmund bombarded Lloris’ goal with five shots on target in the latter stages of the opening half, but Tottenham carried a threat on the break with the pace and movement of Son Heung-min and Kane.

It also ensured only Tottenham’s third appearance in the last eight of the competition.