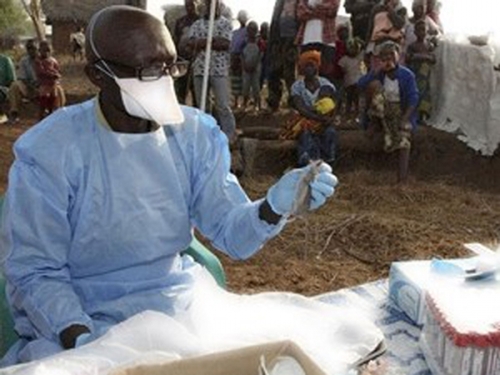 A strange illness has struck at Gidan Dugus under Wangara district of Dutse Local Government Area of Jigawa State killing about 50 children‎, Daily Sun reports.
The disease was said to have first surfaced in July but was not reported by any person from the community until October 28.
It was gathered that the people of the area resorted to self medication and visiting pharmacy shops for treatment against going to hospitals that they consider too far from their area.
When a correspondent visited Gidan Dugus village, the parents of the deceased children were in mourning mood, while parents of some affected ones wonder whether their wards would survive it.
One parent who lost his seven children to the strange illness, Haladu Usman, narrated his experience thus: “Within 14 days, I lost seven of my children, 3 male and 4 female. The children aged between 3-2-1 and a suckling infant died one after the other, there was a day I lost three of them.”
Another parent, Salisu Abdullahi, said he lost four of his children in one week despite several efforts made to get medication from nearby clinics for the children.
”I was dead scared by this unknown sickness which consumed the lives of our innocent children we have intensified in our daily prayers for Allah to protect this community if it is a curse”, he stated.
Also speaking, the ward head of Gidan Dugus, Mallam Umar Dahiru, said it was quite alarming and pathetic as the community now stays in fear and agony for what he described as a catastrophe, saying they buried five to six children on daily basis due to the strange illness.
He explained that they reported the case to the state government and it has sent a team of medical personnel who took samples of blood of some sick children for test but we are still waiting for the result even though they have brought and served the children with some drugs.
He commended the intervention from Dutse Local Government Area with cash assistance to the affected victim’s parents.
Umar Dahiru, however, commended the state government for its concern and urged the community to take the death of their beloved children as a test and destiny form God.
‎When contacted the state Permanent secretary Ministry of Health, Ali Garba Dandidi, who confirmed the incident, said from their record only 39 children were lost to the illness adding that the ministry had already sent an intervention team to the area and had since arrested the situation from escalation.
Ali Garba ‎said from their findings the case started in July and was not reported to the government until October 28, saying “and since then we have swung into action after discovering that it was a severe case of malaria attack on the children.”
He said the people of the area were sensitised on the effective use of insecticide nets and the importance of attending hospitals rather than chemists for treatments.
Tragedy as Strange Illness Kills 50 Children in Local Community in Jigawa was last modified: November 7th, 2017 by Arinze Ago