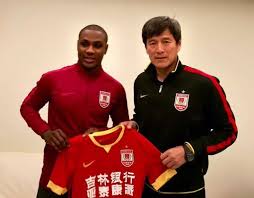 Super Eagles striker Odion Ighalo who has been linked with several clubs including Barcelona has finally joined a new club.

Ighalo who was believed to be desperate for a move away from China to mainstream Europe has joined a new team but he is remaining in China with big guns Shanghai Shenhua.

Indeed, Ighalo is a proven goal scorer in the Chinese Super League having netted 36 goals in 55 games for Changchun Yatai who sadly could not beat the drop and has since been relegated from the CSL.

Ighalo started his professional career at Prime and Julius Berger, he moved to Norway’s Lyn in 2007.

A year later he was signed by Udinese, spending most of his tenure loaned out, notably at Granada, before signing for Watford in 2014.

At Watford he was a big hit; breaking many records before making the big money move to Changchun Yatai.

It should be noted that Obafemi Martins, another Nigerian striker was formerly with Shanghai Shenhua before running out his contract.