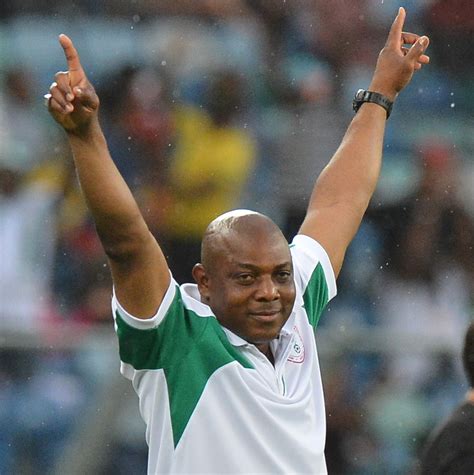 As the present home-based Super Eagles team led by Coach Salisu Yusuf continue on their quest for the CHAD competition, we wait to see if they would be able to match or break one of Keshi’s records in Morocco

But one thing is sure; the ‘Big Boss’ is fondly remembered across the world and some of the records that stood him out while on earth have not be equaled let alone broken.

As we remember the Late Keshi , we look at five of the numerous records set by the soccer icon during his stay on earth.

The Late Stephen Keshi was an apostle of giving the local breed talents a chance at playing for the national team.

It was thus not surprising that Keshi helped Nigeria with her first qualification for the African Nations Championships, CHAN after missing out on the first two editions.

Though Nigeria have been qualifying afterwards for the biennial soccer tourney, Keshi’s third-place finish remains the country’s best performance at the tournament.

We wait to see if the present home-based Super Eagles team led by Coach Salisu Yusuf will be able to match or break this record in Morocco.

Best Record By A Nigerian Coach At The World Cup

Keshi in 2014 led Nigeria to the Second Round of the Brazil 2014 World Cup. No Nigerian till date has achieved same.

It was only the second time that an indigenous coach will be leading the Super Eagles at the Mundial.

The first was when Adegboye Onigbinde led the Eagles to the 2002 World but Nigeria failed to go beyond the group stage that year.

With Gernot Rohr set to lead the Eagles to the Russia 2018 World Cup; any chance of Keshi’s record being broken in this regard will at least wait till 2022.

Keshi is the only coach to have qualified the Togolese National team to the FIFA World Cup till date.

Togo’s one and only appearance at the FIFA World Cup, at Germany 2006, provided a mixture of disappointment, as their young and inexperienced side suffered three straight defeats.

Many argue things may have been different if Keshi was left to eat the fruit of his labour by taking the Hawks to the Mundial proper.

Keshi is the only Nigerian to lift the coveted Africa Cup of Nations first as a player and later as a coach.

In fact, only Egyptian legend, Mahmoud-el-Gohary shares this honour with the Big Boss

Keshi is a trailblazer in many regards and one of them is being the first African coach to qualify two countries, Togo and Nigeria for the world’s biggest football tournament.

Perhaps if the celestial had given him more time to stay among mortals we could have had Nigeria’s own George Weah – taking discipline and courage learnt in football as qualities for national leadership.

Tribute to Keshi – One Year After Big-Boss Demise, His Records Are Yet Unmatched was last modified: January 24th, 2018 by Igbokwe John