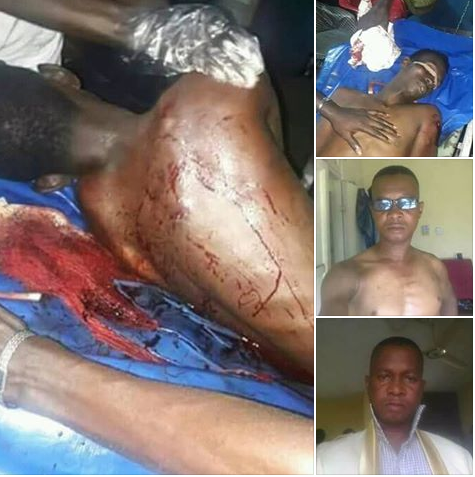 A police officer, Inspector Samuel Imana, at area command in Warri, Delta state has been alleged to have shot three persons mistakenly yesterday, after he was said to be acting under the influence of alcohol at a child’s dedication.

According to Sapele Olofofo, two of the victims, one Elvis Kugbere and another man have been confirmed dead, while the last one is in a coma at UBTH.

The incident reportedly happened at Ejewo Street, Off Okere Ugberikoko Road, Warri, Delta State. According to an eyewitness Inspector Imana accompanied three (Internet Fraudsters) Yahoo boys to a baby dedication, trouble was said to have started when the yahoo boys started spraying money, the police officer started shooting in display of his loyalty, all of a sudden, mysteriously the inspector who was one of the escort pointed his gun directly at the crowd in close range and started shooting at them….

The first deceased was immediately rushed to First rank Hospital within the area where the Divisional Police Officer,”B” Division in warri, CSP Anieteh Eyoh and other Senior Officers dashed to see him before he was transferred to Syracuse Hospital. He later gave up the ghost three hours after losing so much blood.

The Delta State Acting Police Public Relations Officer, DSP Andrew Aniamaka, confirmed the incident, noting that the policeman is under investigation and he is being tried for professional misconduct.