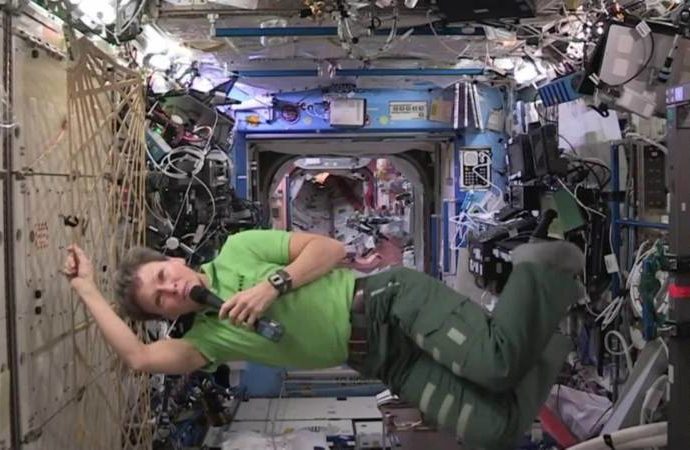 “This is a very special day in the glorious history of American spaceflight,” Trump said in a phone call to space, broadcast live on NASA television.

“That’s an incredible record to break,” he added from the Oval Office, flanked by daughter Ivanka and NASA astronaut Kate Rubins.

Reading from a prepared statement on his desk, Trump also asked Whitson and her NASA colleague Jack Fischer “What are we learning from being in space?”

After Whitson described technology to support long-duration manned trips to space — including a system that converts urine to drinking water for astronauts — Trump went off script.

“Better you than me,” he said.

After earning a doctorate in biochemistry in 1985, Whitson worked as a NASA scientist for seven years before starting as an astronaut in 1997.

She flew to space for the first time in 2002 aboard the space shuttle Endeavour, staying for a six-month stint at the International Space Station, which orbits some 250 miles (400 kilometres) above the Earth.

She became the first female commander of the research outpost in April 2008, during her second, six-month tour of duty.

Her latest, third, trip to space began on in November. She is scheduled to return to Earth in September after an extended nine-month mission.

The oldest woman ever in space, Whitson also set a new record for most spacewalks by a female astronaut earlier last month when she floated outside the space station for the eighth time in her career.

She is married to a fellow NASA biochemist, Clarence Sams. Her hobbies include weightlifting, biking, basketball and water skiing, according to her NASA biography.

“How does it feel to have broken such a big and important record?” Trump asked at one point during his call.

“It is actually a huge honour to break a record like this,” Whitson said, thanking her NASA colleagues for making it possible.

“It is a very exciting time to be at NASA,” she added, mentioning Trump’s support for manned missions to Mars in the coming decades.

After Fischer described drinking coffee in space in “floaty ball form,” Trump asked the astronauts about the plans for Mars.

“Tell me. Mars. What do you see as timing for actually sending humans to Mars? Is there a schedule and when would you see that happening?” the president asked.

“Well, I think as your bill directed, it will be approximately in the 2030s,” Whitson responded.

“As I mentioned, we actually are building hardware to test a new heavy launch vehicle and this vehicle will take us further than we have ever been away from this planet,” she added, referring to the Space Launch System (SLS) rocket.

“Well, we want to try to do it during my first term or at worst during my second term so we will have to speed that up a little bit ok?” Trump said, eliciting laughter from the astronauts floating in microgravity.

“I have great respect for you folks, it’s amazing what you do,” he added.

When Whitson did a flip at the space station, Fischer called her “our resident space ninja.”

Seeing the Apollo missions to the moon as a child had inspired her to become an astronaut, Whitson said.

However, “it took me a lot longer to become an astronaut than I ever, really, wanted it to take,” she said.

“I do think I am better at my job because of the journey.”