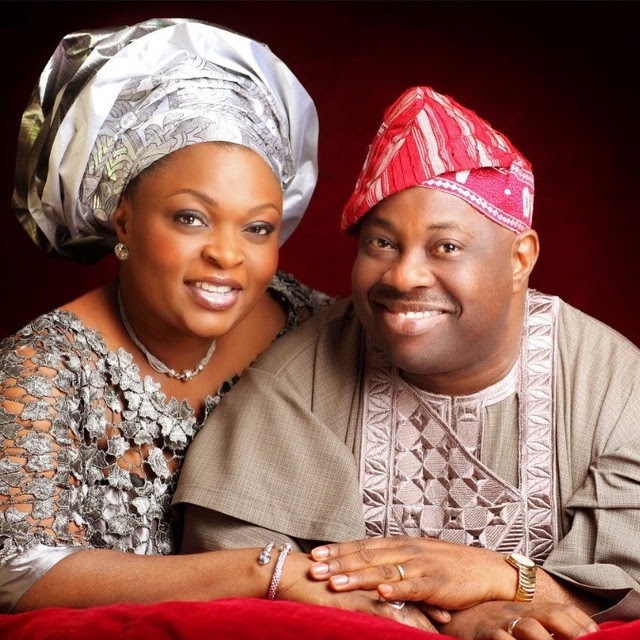 But what many don’t know is that both of them have different character traits. Whilst Dele Momodu (who is popularly called Bob Dee) is the outgoing and publicity type because of the nature of his work, his wife who is a Chartered Accountant is reserved and homely. She hates the publicity content that comes with being Bob Dee’s wife. But over the years Bolaji has come to accept the reality of her life as being the wife of one of the most colourful publishers in Nigeria today and the owner of a strong and popular brand called OVATION.

These last few days have been busy for the couple. They celebrated their 25th Wedding Anniversary last week and Bolaji Momodu clocked 50. She does not like granting interviews.

She does not like publicity and she does not like talking about herself. But last week this ebony complexioned lady of style broke her rule to let City People Publisher, SEYE KEHINDE into her world. It was a coup planned by her ever busy husband who just called on her to join us where we sat having a drink and the interview began, despite the fact that the interview was unscheduled. Below are excerpts of the very revealing interview.

You turned 50 last week, how do you feel?

I feel grateful because I know so many of my friends and family didn’t even make it to 50. It is a big privilege, I am grateful to God. But physically I don’t feel any difference. I still feel 30 within me. No difference.

You also celebrated your 25th anniversary a few days back. How do you also feel?

Wonderful. Its been wonderful. Dele and I have a fairly good marriage. I say fairly because there is always room for improvement. We’ve come a long way. We are just grateful. It gets better with age and time. Its been a good one.

How have you kept your marriage going for 25 years?

Hmmm! I will say God. That is what most people don’t want to hear.

Its God, because without God, I really don’t know. We’ve got our moments. When we took the vows it was for better for worse and we’ve seen the better part, we’ve seen the worse part. With God you can weather anything. I preach to people about marriage. When I tell people about marriage, its amazing. Dele put in a lot of efforts than I do. People don’t know. I still think he puts in more efforts than I do. He wants the marriage to succeed, just like I do, regardless of his busy lifestyle. He has put in a lot of efforts to make it work.

It takes 2 for it to work. That is why it is called a marriage. It’s been the 2 of us together. Of course it comes with all sorts but, which ever way, you have to keep the friendship going. We are friends. The children are there. And then the hurdles are crossed,  which naturally comes initially when 2 people are trying to know each other. I tell people if you can weather the storm and try to be good hubby and wife with each other for the first few years, you will realize that on the other side its quite easier and cosier than where you are coming from. Yes, we’ve seen it all.  We are here standing. I tell people this, I think we are more in love than when we started.

The first day you set your eyes on Bashorun Dele Momodu what were your impressions?

But I just didn’t want to be his wife. I wanted to just be a friend. I don’t want to be seeing myself in the newspapers. And that is how it has been over the past 25 years. Nothing is secret in this house. I have got used to it over time, even though I still don’t like it.  So it wasn’t easy for me to agree to marry him but his power of persuasion helped. That was what took over. And then, his friend, he is an Oba now, kept asking me: why don’t you like my friend and I told him your friend  is a good man, but he is a media guru. I don’t want to be married to a media person.

He just told me look, Bolaji, the only way to get this guy off your back is just to date him, for a while, and then dump him after a while, if you don’t like him. That I did, and I am still in it till today.

Let’s talk about your growing up years. Where were you born? Where did you grow up?

I grew up with my whole family intact.  Ours has been a good one. We were just talking about this a few days back, my siblings and I. We’ve had a good life. We thank God for that. We didn’t struggle for anything. My parents were well to do and they gave us all they could, like the best education available then. My older siblings went to England and America to school. Its been a very closely knit family. If you are friends with me, you must be friends with my siblings. We are very close, we all grew up together. We did every thing together. That is why it is difficult for us to have friends. Most of my friends will have to be my sisters and brothers friends. We thank God. My mum is still alive. I lost my father about 16 years ago, but my mum is still there. Its been a good one. I look back with relish.

Tell us about your father?

He was somehow like my husband. He was always very busy. He was really into himself and his career. He was a Lawyer, a Senior Advocate of Nigeria.

His work came first. He took his profession serious. So, he was hardly ever  around. He was very doting on all of us, especially his daughter. He was a very simple man, very jovial man. They called him Rockefellers because nothing was serious to him. He was always joking about everything.

So we never even took him serious. Even when he had Alzeheirs we didn’t take it serious because he jokes about everything. Even when he began to repeat himself and forgetting things, we really thought he was joking. He was very soft, softer, when compared to my mum. He never laid his hands on any of us till tomorrow, he was so, so proud of his children.

How do you plan to celebrate your 50th birthday?

Really, I don’t want the party that my husband has planned for me for Sunday. But I can’t say No because he means well. I have been hoping and he praying that somehow, somehow the party won’t hold and he would say Bolaji, lets do what you want, which is a simple one, to celebrate it all alone.

For 2 years now he has been asking me for what I want for my birthday and for 2 years now I have been telling him I don’t want anything. I wanted the day to just pass. Its not because I don’t have anything to celebrate. No. Truth be told I have many things to celebrate. A lot. Just this year, I have been very ill. And here I am better now. I have never had a party to celebrate. I have never had it that way before now. Every year when you come to my house on my birthday it has always been an open house, you will come in, find food, drinks and my friends will come over. But to have a party like a big bang in a hall is not my thing. But my husband likes the idea  It’s a gift from him to me.

I appreciates it. We have a family wedding on my actual birthday and they gave us a years notice. So we knew we were going to do the family wedding party because I told them, I was not having a birthday party. I probably wanted to go to the Redeemed Camp overnight, just me, myself and I, but my husband wouldn’t let me be. I didn’t plan any thing for my birthday. Yes, I thought of traveling to maybe Monaco with few friends. I had Monaco in mind or Cancun, but he wants to have it this way and there is nothing I could do to stop him.