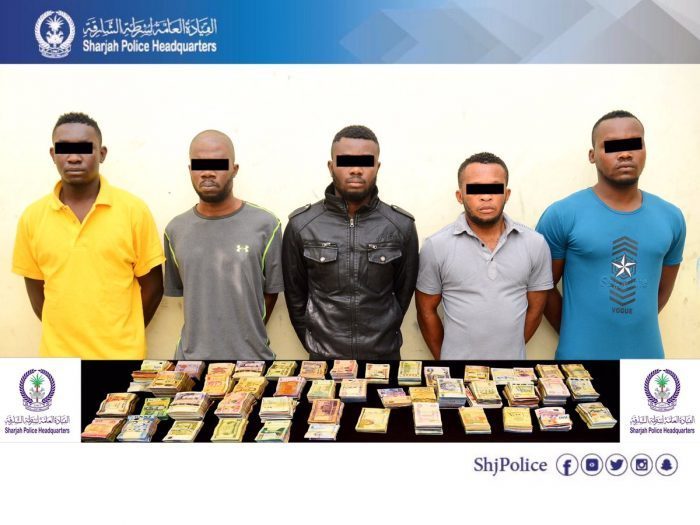 The United Arab Emirates (UAE) Police says it has arrested five Nigerians who “stormed a money exchange in Sharjah and fled with Dh2.3 million”.

Khaleej Times, a Dubai-based newspaper revealed that the men barged into the exchange and smashed the glass barrier between the customers and the staff, stole the money in multiple currencies and fled.

When converted, the money amounts N225.4million.

Two employees at the exchange were injured as they resisted the robbers, one of them eventually managing to notify the Police.

The paper aid the Sharjah Police coordinated with forces from Abu Dhabi, Ras Al Khaimah and Ajman to nab the suspects from four emirates within 48 hours after the robbery was committed.

The incident was reported at Al Ansari Exchange in Al Tawoon area, a top police official saying the suspects came to the UAE on visit visas on March 18.

“The police team reached the site within seven minutes after the robbery was reported,” Khaleej Times quoted the police officer as saying. “The injured staff members were rushed to the hospital, where they were discharged the next day.”

The police lifted forensic evidence from the site and formed a team to crack the case. “Arrest warrants for the suspects were circulated at all ports of the country to prevent them from leaving.”

The police retrieved the number plate of the car in which the suspects fled. One of the suspects was arrested in Sharjah, after which he led the police to the others — two in Ajman, one in Abu Dhabi and one in Ras Al Khaimah.

All the suspects were said to have confessed to the crime.