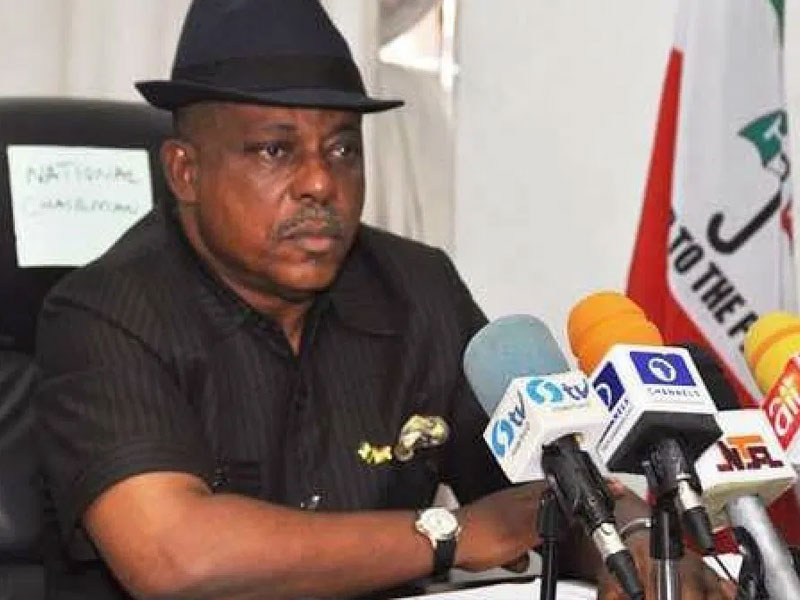 It is no longer news to all Nigerians that the immediate past National Chairman of the country’s main opposition party, the Peoples Democratic Party, Prince Uche Secondus got to power and eventually got drunk with the supply of authority that the office of National Chairman accorded him as the occupier of that exalted position.

Uche Secondus, a man who climbed the ladder from the lowest ladder through the local government, up to the state and finally to the National level cannot be called a novice in the business of politicking but on getting to the topmost level of his political attainment, Secondusforgot how he rose to that all-in-all position of authority, he knew what was right but decided to go through the wrong path by systematically deploying all authorities in his care to destroy the reputation of an already battered image of the opposition party with avarice and unprecedented lust for money.

In a recent interview with the media, Uche Secondus was quoted to have said that “NOBODY OR ANY ORGAN OF THE PARTY CAN REMOVE ME OR ANY MEMBER OF NEC EXCEPT THE NEC.” Isn’t that awesome?

The above quotation drew the attention of political watchers who have watched with reckless abandon, how Uche Secondus, in the last 18 months had taken critically wrong steps to denigrate on the constitution of the Peoples Democratic Party which he signed into law in December, 2017 when he was elected as the National Chairman of PDP alongside other members of the National Working Committee of the party.

All along the section 59(3) of PDP was not altered and it was interesting now that Uche Secondus was given a dose of his own pill with which he has fed many state Chairmen of the party who are also NEC members, he suddenly remembered that “NOBODY EXCEPT THE NATIONAL EXECUTIVE COMMITTEE, NEC of the party has power to remove him or any member of NEC.

With particular reference to Osun State where I come from, Prince Uche Secondus breached the provisions of the PDP constitution in section 59 (3) by acting ultra vire on a frivolous, baseless and unsubstantiated allegations of Malfeasance, Maladministration and anti-party activities leveled against a sitting Chairman via a petition initiated by a gang of faceless defectors into the party, that petition lacked merit in all ramifications and through it Secondus removed the validly elected State Chairman of the party, Hon. Olasoji Adagunodo, a member of NEC like Uche Secondus, with official fiat without recourse to the same NEC that has that power to which he has suddenly turned to for adjudication. It will be unfair to the rule of law if Secondus is not made to pay for his sins.

Uche Secondus promised to use all diligent due processes to investigate the allegations of malfeasance, maladministration and anti-party activities by total strangers who are non-financial members of the party, two of newly whom decamped from SDP and APC into at that time and were used as tools to destabilize the party.

Secondus refused to investigate the matter and neither did he forward his findings through the National Disciplinary Committee which was supposed to send its findings to the National Executive Committee and recommend appropriate measures to the NEC.

Instead three man fact finding team was secretly sent to Osun through the then National Vice Chairman and Secretary of the party in the South West, Dr. Eddy Olafeso and Revd. Bunmi Jenyo respectively which they deliberately shielded from Adagunodo but their plans got leaked and Adagunodo was there to defend himself and the fact finding committee was left with no choice than to report back to Secondus that all allegations against the trio of Hon. Olasoji Adagunodo, the State Chairman, Prince Bola Ajao, the State Secretary and Hon. Adesoye Oyetunde, the State Treasurer be dropped for want of evidence.

Rather than accepting the recommendations of the fact finding committee, Uche Secondus inadvertently exonerated the last two and held on to Adagunodo as if he ever did anything wrong.

Secondus turned himself to the 7 man investigative panel as well as National Disciplinary Committee and the NEC by taking all decisions and issued all directives by ordering Adagunodo to step aside for more than 5 months instead of “not more than 30 days” as stipulated by the constitution which Secondus signed into law, he issued that directive in a letter dated 30th April, 2020.

He thereafter ordered the Deputy State Chairman of the party to take over in acting capacity and 6 months later, 30th of October, he issued another letter claiming to have “validated all malevolent allegations against Adagunodo without investigation, without any National Disciplinary Committee sitting or inviting the accused Chairman.

Adagunodo, took his time thereafter as he complied with the directives from April, 30, 2020 when Uche Secondus told him to step aside in a letter that was purportedly signed by the National Secretary of the party but whose signature was allegedly suspected to have been forged by Uche Secondus cronies which I personally believe was forged.

I challenged the National Secretary to hold the Holy Quran to swear publicly in front of NEC members if truly he was the one that signed that letter of stepping aside that was issued to Hon. Olasoji Adagunodo during the COVID-19 lockdown, I know Alhaji Ibrahim Tsauri to be a devout and truthful practising Muslim who fears God who will not swear falsely, I will implore the NEC to call him and verify this allegation of forgery against Uche Secondus who was making millions of Naira from the Osun highest bidder that wanted to buy the party structure.

Shortly before the Governorship election of Ondo State, Uche Secondus asked for his sponsor in Osun for financial assistance to prosecute the Ondo State Election and he was given the condition to get money only if he removed Adagunodo as Osun state chairman which led to the fathom validation of malevolent allegations that ended up in the unauthorised removal and wrongful replacement of a NEC member by Uche Secondus without recourse to NEC on Adagunodo’s illegal removal and his unauthorised replacement with Sunday Bisi.

My appeal to the National Executive Committee of PDP is to really come out openly, investigate the Osun matter and how Uche Secondus polarized the party with his greed for money, find out the truth and without wasting time, return Hon. Olasoji Adagunodo back to office which is the only solution to the lingering crisis of the party in that state.

The inability of the Senator Bukola Saraki Led National Reconciliation and Strategy Committee to resolve the Osun crisis has been largely suspected because of Dr. Deji Adeleke who is the chief sponsor of the crisis rocking Osun State and Senator Bukola Saraki that all of us in Osun State believe is a man of conscience also needs to work very hard, with all seriousness it requires to wash himself clean of this allegation of nepotism and his alleged failure to be truthful where personal friends are involved.

The PDP NEC members must also bear it in mind that failure to tackle the crisis head long, expose the ills of Uche Secondus against the mandate freely given to Adagunodo by the people of the state will make the party to be ridiculed everywhere during all forthcoming
elections, not only in Osun but beginning from Ekiti and in other National elections because PDP has a new outlook and is being nicknamed A PARTY OF LAW BREAKERS” throughout the South West.

Anything short of resolving the Osun crisis which Uche Secondus created by violations of section 59 (3) of PDP constitution through the reinstatement of the validly elected chairman of the party and reversing the imposition of the party Publicity Secretary as the Chairman of the party to his elected office as the image maker of the party will continue to rock polarized PDP in Osun State and beyond.

Uche Secondus & Section 59(3) Of PDP Constitution: The Need For INEC To Correct Secondus Misuse Of Power | By Abayomi Ojosegun was last modified: September 4th, 2021 by Reporter