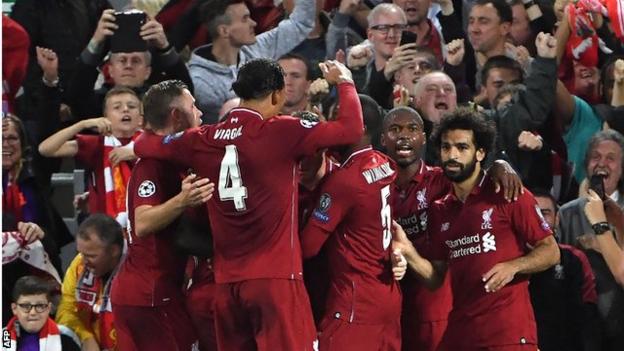 Firmino was only fit enough to be on the bench after suffering an eye injury in Liverpool’s victory at Tottenham on Saturday – but he emerged on 72 minutes to secure a win that manager Jurgen Klopp may have thought was slipping away after Kylian Mbappe’s late equaliser threatened to rescue a point for PSG.

Daniel Sturridge, Firmino’s replacement in Liverpool’s starting line-up, headed them in front from Andrew Robertson’s cross on the half hour, James Milner adding a second from the spot six minutes later after Georginio Wijnaldum was fouled.

Thomas Meunier pulled one back for PSG before half-time but, with Brazil superstar Neymar and Mbappe subdued, Liverpool were in control, seeing a Mohamed Salah goal ruled out for a foul.

Klopp’s side were stunned when Mbappe pounced in the area to beat Alisson with seven minutes left – but Firmino made it a perfect start to Liverpool’s Champions League campaign by beating Alphonse Areola with a low, angled drive deep into stoppage time.

Liverpool could have been forgiven for believing fate was against them when Mbappe made the most of his first serious opportunity to drill a powerful finish low past Alisson in front of the Kop with seven minutes left to draw the visitors level.

Klopp’s team had barely been troubled by PSG’s star-studded attacking line-up and, if anything, looked more likely to add to their tally than concede.

It was to their credit, and an illustration of the talent and spirit at Klopp’s disposal, that Liverpool gathered their strength for one last push that delivered Firmino’s winner.

Klopp does not just have an array of attacking forces, he has fiercely-driven competitors such as the outstanding James Milner and Andrew Robertson to set the tone and the example for others to follow.

Liverpool proved once more that they will pose a huge threat in this competition because they are capable of scoring goals at any time from any angle from a variety of players – it is a weapon that will make them serious contenders if they can make their way into the knockout phase, as they proved last season.

And this opening victory against the side likely to be their main challengers for the top spot in Group C is the perfect opening.

Liverpool demonstrated their pedigree and danger when reaching last season’s Champions League final. This result against another team with designs on the trophy is an early warning sign for the current campaign.