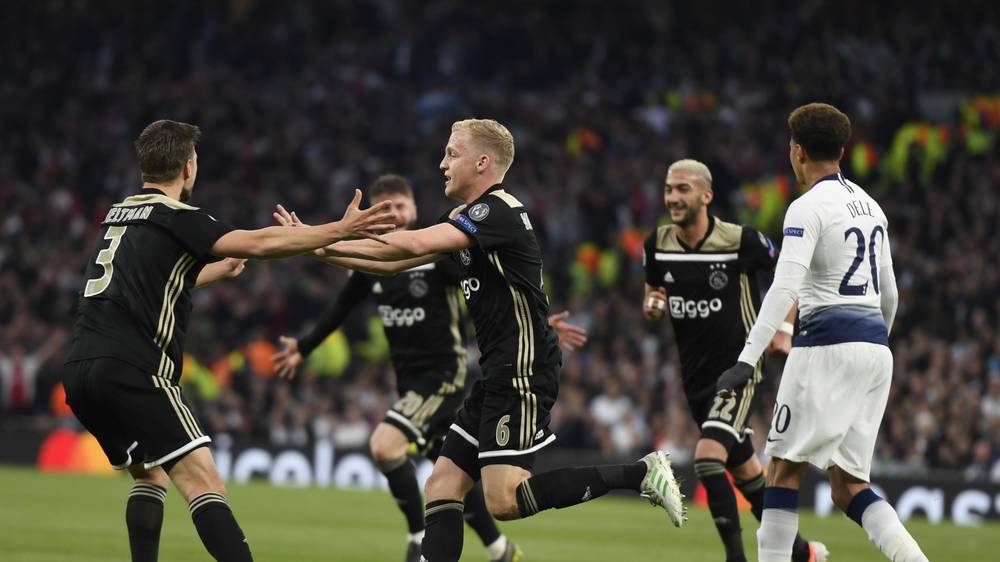 Tottenham face a daunting task to keep their Champions League hopes alive after Ajax secured a crucial advantage in the semi-final first leg.

Spurs struggled to overcome the absence of forwards Harry Kane and Son Heung-min – injured and suspended respectively – and their job was made even harder by the loss of defender Jan Vertonghen after he suffered a facial injury in the first half.

Vertonghen’s problem raised questions about player welfare after he was allowed to continue, albeit for only a few seconds when he was clearly badly shaken up after an aerial collision involving team-mate Toby Alderweireld and Ajax goalkeeper Andre Onana. He eventually had to be supported by two members of the Spurs staff as he went off.

Tottenham tried to force the pace after the break with plenty of possession, but it was Ajax who came close to adding a second when David Neres struck the inside of the post with Lloris beaten.

Ajax held on to their lead in relative comfort and it will need a stirring Spurs comeback to prevent the Dutch side facing either Barcelona or Liverpool in the final on 1 June.

Tottenham were not lacking in effort on what many regarded as the biggest night in their history, a first Champions League semi-final staged in their magnificent new stadium.

It was quality and threat that was missing, with Spurs unable to compensate for the damaging suspension of Son and the injury to top goalscorer Kane.

The burden fell on to Christian Eriksen and Dele Alli, along with Lucas Moura, but they were simply unable to trouble Ajax on a night of pure frustration for manager Mauricio Pochettino, his players and the supporters who packed this arena and backed their team superbly.

Spurs also missed the midfield industry of the injured Harry Winks and were hit further by the loss of defender Vertonghen, who was surprisingly allowed to carry on briefly despite a heavy blow to the head and apparent questioning by referee Mateu Lahoz.

The Premier League side are still not out of this tie, and if their Champions League run to the last four has proved anything, it is that they must never be discounted.

However, they were second best and lacking in punch here. They will need to produce much better if their dream of advancing to the Champions League final in Madrid is to be realised.