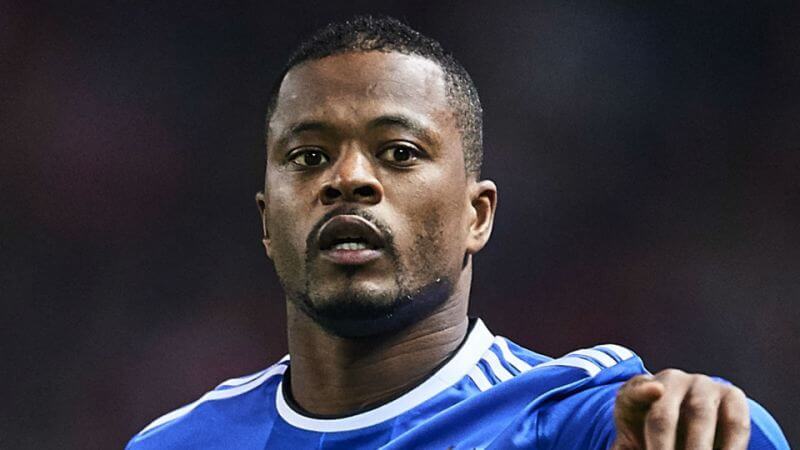 Patrice Evra has been given an initial one-match ban and the Marseille defender will face a UEFA hearing after his altercation with a fan before Thursday’s Europa League match with Vitoria Guimaraes.
Marseille have already launched an internal investigation into the incident, which saw Evra red carded before kick-off after he appeared to kick a supporter.
Marseille lost the game in Portugal 1-0 and Evra, who was named among the substitutes by boss Rudi Garcia, will miss his side’s trip to Konyaspor later this month.
In a statement issued on Friday, UEFA confirmed further punishment could be in the offing, with its Control Ethics and Disciplinary Body set to review the incident next week.
The statement read: “Patrice Evra – red card for violent conduct – Art. 15 (1) of the UEFA Disciplinary Regulations.
“Following his dismissal, the player is suspended for at least one match. The UEFA Control, Ethics and Disciplinary Body will decide on this case at its next meeting on 10 November.”
Defeat at Vitoria left Marseille second in Group I behind Red Bull Salzburg.
A statement released by Marseille after the game read: “Olympique de Marseille has noted the altercation between an individual and Patrice Evra in the warm-up of players during the match against Guimaraes.
“An internal investigation was carried out to establish all responsible.
“In any case, a professional player must keep his cool in the face of provocations and insults as hard and unjustified as they are.
“Similarly, the club can only condemn, by definition, any destructive behaviour by a ‘pseudo supporter’ who insults his own players when everyone must instead support his team.”
Evra has made 10 appearances in all competitions this season, while the 36-year-old has featured in four of Marseille’s 11 Ligue 1 fixtures so far.
Former France boss Raymond Domenech told L’Equipe TV that Evra’s behaviour was akin to career suicide.
Evra and Domenech infamously clashed during the latter’s time in charge of the Les Bleus at the 2010 World Cup, when his team captain led a revolt and France crashed out in the group stages.
“Earlier, no he did not have suicide tendencies, but this is a suicide attempt,” Domenech said.
“In difficult times he was a boss. He played an important role in the dressing room, during group conversations.
“But now the end is in sight. This is something psychological. He knows it’s over and he will not play anymore.”
Domenech added: “I cannot praise this behaviour, but I can understand him. He thinks he’s invincible, he wants to go and fight with all the supporters.”
UEFA Bans Patrice Evra for Kicking a Fan During Europa League Match was last modified: November 3rd, 2017 by Arinze Ago