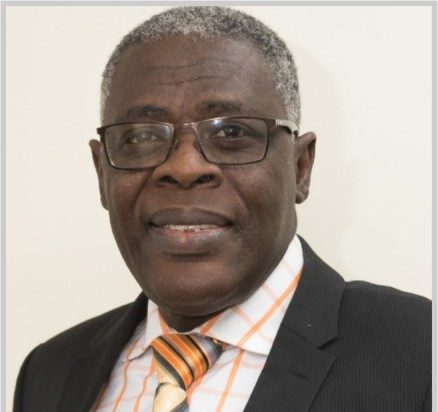 A top Pastor of the Redeemed Christian Church of God (RCCG) who is based in the United Kingdom, Pastor Andrew Adeleke is 60. ‘Papa’, as the prominent man of God is popularly known, clocked 60 years of age in grand style on Saturday 10th October, 2020. And the occasion was a well celebrated one not only among his parish members, House of Praise but other parishes across UK, as well as his family, friends and associates.

It was indeed an accolade galore for Pastor Andrew. The prayers, best wishes and encomiums were not unexpected because the man of God means different things to different people. To some, Andrew Adeleke is a father, mentor, a role model and a prayer warrior. While both his private and Christian life, to many, is a source of inspiration. He is no doubt, a firebrand and a spirit-filled man of peace and honour.

At 60, Pastor Andrew Adeleke has every reason to give thanks to God; he is a fulfilled man in all ramifications. He is happily married to a woman like his sister Pastor (Mrs) Yemi Adeleke and their union is blessed with lovely children (Aaron, Phil and Beulah). He is a great investor not only in stocks, shares or Forex but also in people and destinies. No wonder his wife has described him as a loving and caring husband, a romantic man she has come to embrace and love.

Pastor Andrew Adeleke, according to his biography, had a roller coaster start to the early part of his life and his life’s testimony speaks of how one can achieve great dreams and aspirations in spite of any circumstance.

He went from the palace to the boy’s quarters; from the boardroom to the pulpit.

His humble beginnings started at a palace in a village in Oyo State, Nigeria. Born into a royal family to the Alapinni of Òyo, Alhaji Salawu Aremu Adeleke and Olorì Rafat Abike Adeleke, he was brought up in a large Muslim home of more than 10 wives, many females and few male children. Growing up in a very staunch Muslim family, he had to attend Islamic lessons after school every day. One of his memorable mischievous deeds as a young boy happened during the after-school Islamic lessons.

After a few weeks of undergoing Islamic lessons, young boys were required to bring an “offering” to the Chief Imam of the mosque; which usually was a pot of freshly cooked chicken stew. On the day Demola was taking his offering to the mosque, he started complaining enroute, that the pot of chicken stew (which he carried on his head, African style) was getting too heavy and he would like to take a break to rest. He put down the pot of stew and in no time, helped himself to a piece of chicken and another, pulling his sisters into his munching feast (he probably thought this would help to make the load lighter). Life for Demola was normal and blissful until it all rudely changed when his father passed away in 1969.

As a result of his father’s passing, Demola was thrown into turmoil, he was removed from all that he considered to be home and sent to live with extended family members. He was passed from one family to another until his elder brother returned to town from the UK and Demola finally found a permanent home with him in 1973.

Demola completed his education at Òrányàn Grammar School between 1974 – 1979 and subsequently attended the prestigious Obafemi Awolowo University (OAU), Ilé Ifè. He majored in Medical Microbiology at University College Hospital (UCH) and practiced for a while at the Oyo State Hospital, then moved on to work as a haematologist at Adeoyo Government Hospital, Ibadan, before setting up his own medical laboratory called Glory Diagnostica.

Against all odds, Glory Diagnostica flourished, he was able to employ staff and even set up one or two branches of the medical laboratory.

His decision to resign from Glory Diagnositca came as a shock to his business partners and those he considered to be mentors and senior friends (also in the faith), as many saw him as a young man with a promise and secured future, who took great risks but managed to succeed at what he set his heart to do.

Being the young charismatic man Demola was, he lived life with the associated lifestyle of the medallions and the iconic hairstyles. One thing he always did, was to surround himself with people who challenged and encouraged him. His Christian friends never gave up on him and decided to pray him into the Kingdom.

Demola met with the Lord and decide to give his life to Christ. He became born again and his family received this news fairly well, going as far as suggesting that for someone like him, it would be safe to join the Deeper Life denomination.

Still as a young Christian, Demola showed commitment and dedication to the things of God and to the work of the Lord in the Church. He joined the Christian fellowship, the Gospel Group, Oritamefa Baptist Church and soon became an integral member of the fellowship. Serving in various capacities, from the drama group, to the designated bus driver, the guitarist and even a financier of the work the fellowship and Church were known to do.

Bro. Demola, as he was known then, grew quite close to the Pastor of the Church, Rev S.M Leigh and there were numerous times he would arrive at the Pastor’s house, scaled over the locked gates and spend hours sitting with the Pastor and even at times, spend the night.

In Rev Leighs own words, he started suspecting that if Bro Demola was not careful, the anointing of the Pastor he had come to befriend might just fall upon him.

As the next stages and phases of his life unfolded, he met Sister Yemi Akinbobola (now Pastor Yemi Adeleke) and on the 1st of October, 1988 at his father-in law’s church, the Anglican Church of Okeigbo they got married.

After their wedding, the newlywedded couple made a decision that would change their lives forever. They decided to move to the UK to start their family there. This was the beginning of a chain of events that will lead to Pastor Andrew’s establishment in the UK.

THE CALL AND MINISTRY LIFE

The initial plans when leaving the shores of Africa was to come to the UK and set up businesses, make money and live a better life. Having done a number of ‘welcome to the UK’ jobs that a fair amount of Africans would find themselves in when arriving into the UK, he indeed, in line with his usual words of confession ‘water will find its level’ he found his level as he got into jobs that was in line with his training in microbiology. It quickly became apparent that God had other plans for Pastor Andrew.

In 1990, he was invited to join the Redeemed Christian Church of God where he helped and served in Pastoral leadership with the first RCCG Church both in UK and Ireland at the time. In 1992, with a blessing to leave by the General Overseer he started a Church Agape Assemblies, which later under divine instructions became affiliated with the RCCG and over time became RCCG’s second parish in the UK. The Church was renamed The House of Praise and relocated to the Macbean Centre Woolwich, from the Elephant and Castle Shopping Centre in 1994.

Since then with the help of God and his formidable partner Pastor Yemi, Pastor Andrew planted well over 25 Churches both in the UK and around the world, whilst still playing a pivotal role in the development and emergence of the RCCG in the UK. Over the years, The House of Praise has seen and experienced tremendous growth both in numbers, outreach and parishes, with mainstream campuses in Charlton, Peckham, Camberwell (the current main campus), Cardiff (Wales), Grays. House of Praise, a renowned charismatic Church, with the motto “where divine intervention is a common occurrence” has over the years hosted many of God’s Generals in the work of the ministry, from Pastor Benny Hinn, Morris Cerullo (late), T.L Osborne (late),  Dr. Richard Robert, Pastor E.A. Adeboye, Bishops Robert Kayanja, Bob Asare, George Bloomer, Jackie McCullogh, Paula White, Matthew Ashimolowo, just to name a few.

Currently, Pastor Andrew aka Papa as he is fondly called, sits and serves on the Executive Council of the Redeemed Christian Church of God UK, and is the Regional Pastor of Region 2 Wales and SW England and also the Chairman of the RCCG African Missions Wales.

As a Pastor and an Apostle, Pastor Andrew uses his personal testimony and real-life stories and experiences in his sermons, teachings and motivational speeches to challenge and encourage everyone and anyone who listens, bringing both spiritual and financial freedom to their lives. He is known for his daring faith adventures and finds his forte in using the Word of God to emphasize destiny and Biblical success. With him, the word ‘impossible’ is not in his vocabulary.

READ ALSO: HOW COVID-19 TOOK MY BUSINESS TO THE NEXT LEVEL – SB LIVE