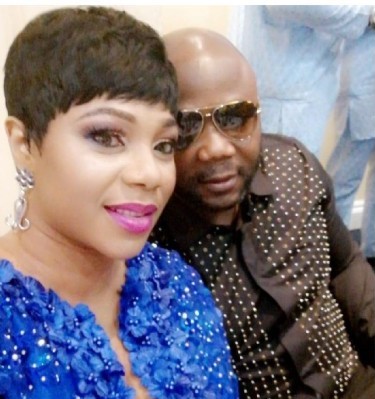 Sunday, 10th of February, 2019, will remain unforgettable on the mind of many Lagos happening babes and men as they all came out in their numbers to honour popular London celebrity Couple, Abdul Azeez Abiodun Germany and his pretty wife, Beelquis Yetunde Asabi, as they throw a 2-in-1 party. It was royal blue monotone affairs when Beelquis signed the dotted lines with her long time friend, Alhaji Abdulazeez Lameed aka Abbey Germany amidst pomp and pageantry at their new mansion in Lagos.

The event which has been  on the lips of many Lagos society big wigs for months took place at the newly built mansion of the London celebrity couple at Sheghe Otone St. University View Estate Adjacent Lagos Business School, Ajah, Lagos. The Jaw dropping property which was bought for many millions of Naira was built to taste. It doesn’t only show affluence, it show luxury and class. The interiors of the house were all imported and those who have seen the interiors revealed that it worth many millions of naira. Information at our disposal reveals that, Abbey Germany spent nothing less than 250 millions on land, house and general fitting and their wedding.

It was further revealed that all the tiles and interior were all imported from Germany and Italy, while all the Sofa are not the regular one you see around.   The event which kicked off as early as 10.30AM to 1pm with Nikkai had the beautiful bride, Hajia Bilikis, fondly called Bilique looking elegant in an expensive white lace matched with a pure 18carat gold matched with white diamond stones. Her beautiful Rodo shoe speaks of class as she walked into the well decorated mansion. She beams with smile as she took her seat beside her husband of many years while they were joined in matrimony.

Yes, she has been with her husband for over 10 years and despite being based in Uk, they are very popular on Lagos social scene. They are the toast of many Naija Musician like King Wasiu Ayinde Marshal aka Kwam1. Biliquee and her husband enjoyed massive praise from the fuji living legend. Their union has been blessed with 4 kids.

Abbey Germany is one of rich London socialites who is not just popular as a businessman but as a philanthropist. His wife is also a business the woman making us proud in United Kingdom.

Of course, Sunday 10th of February didn’t end with just Nikkai, there was also a House Warming Program which started immediately after the wedding at 1 pm.

Many of the couple friends all came out for them. They all rocked the blue and white dress code for men, while were spotted in the Royal  Blue On Royal Blue attire. One of her friend who was very noticeable was Aralamo Ashabi Balogun, the popular London socialites who sell Gold and Diamond. Their friendship is over 10 years and still counting. They are one of the celebrity babes who dominate the London social scene.