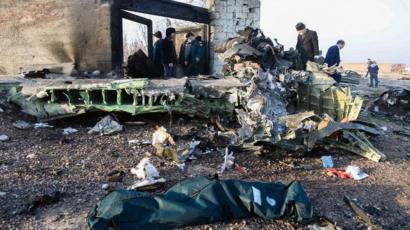 Iranian and Ukrainian officials have begun investigations on the crash of a Ukrainian airliner near Tehran, Iran’s aviation authority said on Friday.

The investigation is coming amid mounting claims that the jet was shot down by an Iranian missile, NAN reports.

All 176 people on board the Ukrainian International Airlines (UIA) Boeing 737 airliner died when it crashed in a field shortly after take-off on Wednesday.

Most of the victims were Iranian and Canadian citizens. Canadian Prime Minister Justin Trudeau has said that evidence suggests the airliner was downed by an Iranian surface-to-air missile.

Iran has rejected the accusation. Ukrainian President Volodymyr Zelensky has remained cautious, saying the missile scenario has not been ruled out.

“We call on all our international partners, especially the U.S., Canada, and Britain, to present any evidence pertaining to the catastrophe,” Zelensky said in a statement.

Iran has maintained that the plane went down due to a technical problem.

Ukrainian state media initially reported that the most likely cause was an engine fire.

Investigators are concentrating on the damaged black-box flight recorders recovered from the crash site.

The incident occurred hours after Iran fired missiles at U.S. bases in neighbouring Iraq in retaliation for the killing of a top Iranian general in a U.S. airstrike.

Ukrainian investigators have been considering several possible scenarios, including that the plane could have been hit by a Russian-made Tor missile.

Some of those investigators were involved in determining that an anti-aircraft missile shot down Malaysia Airlines Flight MH17 over eastern Ukraine in 2014.

German Foreign Minister Heiko Maas has urged Iran to conduct the investigation with as much transparency as possible.

Those responsible for the probe in Iran have been informed that Canada and Ukraine should be involved in the process, Maas told the n-tv broadcaster.

Germany’s top diplomat also praised Iran’s offer for dialogue with the U.S. as an “important signal” and welcomed U.S. President Donald Trump’s restraint in responding to the crash.

“All sides have recognised that the time for military escalation is over,” Maas said.

German airliner Lufthansa announced it was grounding its daily flight between Frankfurt to Tehran.

The company said that it would decide when to resume the flights once it was able to assess detailed information.

A Thursday flight to Tehran operated by Lufthansa turned back after around an hour in the air due to changes made to the security assessment regarding the airspace around the Tehran airport, a spokeswoman said.

French Foreign Minister Jean-Yves Le Drian called for the “fullest transparency” on the circumstances of the disaster, amid reports that the plane’s engines could have been produced at least partially in France.

“If we are asked, we could provide our expertise.

“For the moment, we have not been asked,” he told RTL radio.

Lofven spoke late on Thursday with Trudeau, and the leaders agreed on the need for a comprehensive investigation, according to a statement from Lofven’s office.

Trudeau on Thursday cited “intelligence from multiple sources” suggesting that the plane was shot down.

“This may well have been unintentional,” he said.