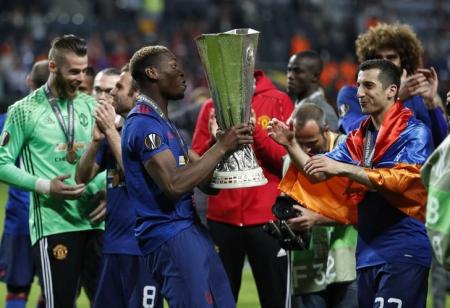 The English giants have also qualified for the group stage of next season’s Uefa Champions league despite finishing sixth on the English Premier League table this season.

United refused to be demoralized despite an attack on the city that claimed the lives of 22 people and injured 59 just a day before the Uefa Europa league final.

A deflected shot from Paul Pogba in the 17th minute opened scoring for the red devils didn’t look so sharp on the night at the beginning while Henrik Mhikitaryan sealed victory with a superb acrobatic from a Chris Smalling header inside the 6-yard box in the 48th minute.

United who are winning this trophy for the first time in history have now joined four other teams including Juventus, Bayern Munich, Chelsea and Ajax to have won all Uefa club competitions title.

While speaking to Journalists on the night, United mifielder, Paul Pogba reiterated that the trophy was for all Man United fans, the victims of Manchester Arena bomb blast and the entire England.

Jose Mourinho’s men had to put in their all to ensure their not-so-popular season end a success with three trophies including the Community Shield, League cup and Europa League to consolidate the Portuguese first season at Manchester united.

Ajax manager, Bolsz on the other hand game kudos to the well-organized United defence but claimed that the game was so boring with United’s opener coming from an undeserved deflection while the English side sat at the back to soak in pressure.

United will now join Chelsea, Tottenham, Manchester City and Liverpool who will be representing England at next season’s European primary club competition, the Champions League.

The Secret Things I Did To Keep A Scandal Free Profile”-Star Actress, Yewande Elemosho