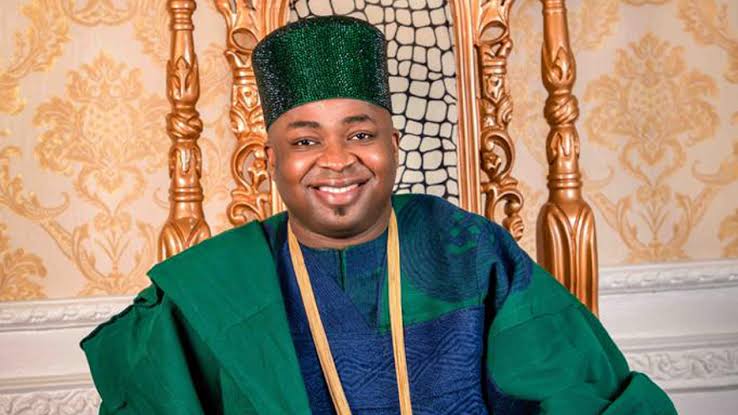 It was a night of bliss, glamour and a gathering of who is who in Lagos on Saturday, 10th of April, 2021, as Lagos-respected King, Oba Muhammed Saheed Ademola Elegushi, celebrated his 45th birthday in grand style. The dinner birthday, which kicked off at 9pm witnessed the arrival of prominent Lagosians of class and style in their luxury automobiles to the monachy event centre in Elegushi, Lekki,  where the event was held.

The 45th birthday, which also coincided with Oba Saheed Ademola Elegushi’s 11th anniversary lasted for a week as Oba Ademola lined up many events to commemorate the big day, while the grand finale was held on Saturday night with a grand reception.

One would have expected the event to be a traditonal regular Owambe stuff, but it was nothing like that as Oba Ademola Saheed Elegushi brought forth his style with an exclusive classy birthday dress code, “classy and glamorous”. As at 10pm, all guests were fully seated, awaiting the grand arrival of the celebrator, Oba Saheed Ademola Elegushi, the Paramount Ruller of Ikate land, Lagos Island.

He didn’t keep them waiting for long, as he led his powerful entourage to the monachy hall in his royal blue jacket and trousers with his royal blue cap, befitting his status as the celebrator. His Entourage was a powerful one as  Ooni of Ile-Ife, Oba Enitan Ojaja Ogunwusi, Oba Fatai Akamo, Akinsiku of Lagos, Olori Aramide Elegushi were among the team ushed him into the hall. He beamed as he saw a large number important dignitaries, who came from far and near under the same roof for him. Of course, many of the guests knew it was going to be a night of fun, glitz and glamour.

To say that it a was night of bliss and galmour is like stating the obvious as Kehinde Iyiola of Finnese Event took charge of decoration and transforming of the hall into heaven on earth. The white luxury chauvaria chairs complemented the royal decor which was beautifully done by Finnese. Kehinde is one of the big event planners in Lagos and she recently opened a new event centre at 7up in Lagos Island.

At a few minutes to 12 mid-night, the hall was fill up to the brim with celebrity women, who came to honour Olori Aramide and her husband, Oba Ademola Elegushi. Have we given you gist about Olori Sekinat Aramide look for the night? It was a flowing fushia pink gown, which matched her skin tone as her 21 carat Saudi gold shasha was bit down to her chest. Her jewellery was worth million of naira and her shoes was a bottle-green luxury collections from Hermes shoes and bags, which set her apart as a queen.

You can call it Unusual, but only Oba Saheed Ademola Elegushi could make Oba Wasiu Omogbolahan (Oniru of Irulamd) Oba Fatai Akamo (Olu Itori), Oba Abdulrasheed Akanbi (Oluwo) Olofa of Offa, Oba Folarin Ogunsanwo Telade change their traditonal regalia to spot the glamorous dress code. They all looked so ageless in a pair of denim and designer shirt. With their royal heads covered and traditional walking staffs in hands, they chatted and cut the cake with their friend, Oba Ademola Elegushi, who was 45 years-old.

While many were enjoying the ambience of the night, Akinsiku, Olori Eyo of Lagos, was called to speak on his friend of over 20 years. He said so many amazing things about their youthful age. How they use to be 3 friends until they lost one to the cold hands of death. He said Saheed was a very good friend, who always stood by his friends. He said though southeastern, but highly disciplined. He prayed for him and spoke about many things they had done as young guys.

As the night unfolded, the King made his 2nd appearance in a white long sleeve shirt, with a pair of white trousers and a face cap. He smiled broadly as many guests turned to catch a glimpse of his 2nd look. He looked so handsome and ageless at 45 years.

At a point, Olori Hadiza Elegushi Yakasaai walked in as a queen too. She was a cysnoure of all eyes in white length floor gown with her friends. She was also there in her capacity to support her hubby. She joined Elegushi family members for the cutting of cake later at few minutes past 1pm. It was surely a night to remember for her too as her elder brother, who is a Senior Advicer to Kano State Governor also made it for his inlaw, Oba Ademola Elegushi.

Of course, there were lots of memories to last for a life time and one of them was Oba Ademola Elegushi’s moment with his mum. That was the moment Olori Aramide brought the King’s mother, Olori Agba Elegushi, to the stage to take photograph with her son. She spotted a luxury Galilaa Guinea. Olori Agba Elegushi is in her 70s, but surely doesn’t look it. She walked gracefully beside Olori Aramide. Another memorable moment was when Olori Aramide Elegushi and her husband danced with many Lagos society women of style. Many admired how Olori Aramide took Charge and made sure the event went as planned.

To say that it was a night that will linger for days will be an understatement as Oba Ademola Elegushi gathered over 7 ‘A’-lsit Nigerian super stars under an umbrella.

Davido, Olamide, Naira Marley, Patoraking, Fireboy and many others thrilled guests throughout the night.

Have you heard the gist about how Naira Marley seperated Marlian babes from the Marlian women? It was one of the high point of the event as Naira Marley made Akinsiku of Lagos, Olori Aramide, Oba Ademola Elegushi danced to many of his hit songs to the admiration of all.