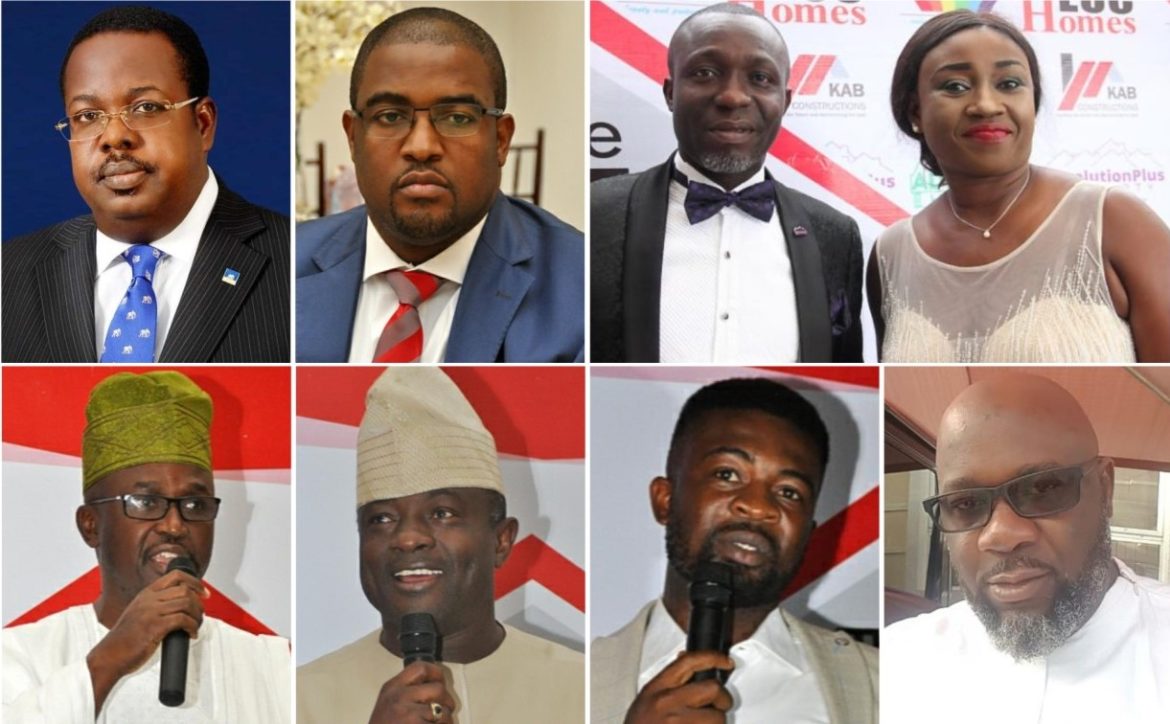 The Real estate sector remains one of the bedrocks of the Nigerian economy despite the uncertainties rocking the sector. In the last few years, it has continued to do well and a lot of property players have made it big, especially in Lagos where the majority of them have their businesses.

Many players have revealed that since 2015 the real estate sector had been badly affected by the economy but in spite of all these, some players in the real estate industry are still flourishing.

These are real estate players who are into property development and, those who sell land in various locations and are doing quite well.

The first is Kennedy Okonkwo, the CEO of Nedcomoaks Properties. A few months back, Forbes Africa put him on their magazine cover. In the interview,  he spoke about the many issues affecting real estate in Nigeria. Mr Kennedy is a property developer who has built more than 1,000 housing units. In the last few months, he has completed a lot of housing projects in the Lekki-Ajah axis.

Chief Bisi Onasanya is another real estate player who has built multi-billion naira housing projects in the last few months. If you drive around Lekki, especially Osapa London area you will come across many of his housing projects. He is the Managing Director of Address Homes; and presently, he has more than 4 estates, both ongoing and completed projects. He is one of the few players in the sector who builds consistently despite the harsh economy. He builds in the highbrow areas of Lagos like Victoria Island, Lekki, Ikoyi etc.

Oba Adetola Emmanuelking is another top real estate player who has been playing big in the sector over the years. He is the Managing Director of Adron Homes & Properties. His property firm is all over Lagos. He is one of the top players who has taken the sector by storm. Almost every day, he starts up a new housing estate. Presently, he has over 40 offices in Lagos, and in the last few months sold many landed properties.

Babatunde Gbadamosi is the developer of Amen Estate Phase 1 & II.  He also contested for the last Guber election in Lagos. Talk of a big estate where celebrities live in Lagos, Amen Estate would also be mentioned.

Presently, houses are currently selling at Phase II of Amen Estate. Amen Estate is on Eleko road before Ibeju Lekki town. His wife, Mrs Sade Gbadamosi is the Financial Director of the company and they have both done well this year.

Bamidele Onalaja is the Managing Director of RevolutionPlus Property Development Company. Mr Bamidele is a top property player who has distinguished himself. Recently, he extended his real estate arm to Ibadan where he now plays big with other players there. In Ofada Mowe, he is currently building a block of a housing unit. And he has also acquired more than 6 estates this year where they sell land.

We can’t talk about Revolution Plus Property without mentioning Mrs Tolulope Onalaja, the Executive Director and the amiable wife of Mr Bamidele Onalaja. They co-run the company and their combination has yielded positive results.

He has been consistently building there and other highbrow areas in Lagos. Recently, he built a block of units at Chevy-View Estate in Lekki where they are currently selling.

We cannot also forget Chief Murphy Osuala, the Managing Director of the popular Property Development company in Lagos, Empire Homes. He’s currently doing massive projects behind Chevron head office in Lekki, Lagos. He also has another housing estate at Orchid hotel road, opposite Eleganza house, Lekki. Chief Murphy has been in the real estate for decades and he is still waxing stronger by the day.

Another person who has done well is Mr Bashir Jimoh, Managing Director of Bashmoh Homes. Bashmoh homes has land that’s currently selling in and out of Lagos. Recently, they have acquired big Properties in Magboro and Ibadan. This property firm is one of the leading property companies when it comes to sales of land, as it has built plenty of trust in the minds of people.

Ben Odunzeh is the MD/CEO of EUC Group, a pan African real estate firm. A few months back, the company signed popular actress, Juliet Ibrahim as a brand ambassador. Mr Ben is currently the biggest landowner in Ibeju Lekki, Lagos. He acquires land in large quantity and sells at affordable rates. He has also moved to the East recently where he’s equally doing well. He’s one of the leading property players this year who has been very active in the sector.

Engr. Lekan Aderinwale is also doing well. He is the MD of Structmatics Engineering, a reputable housing construction firm.  Engr.  Lekan is a young structural engineer who has carved a big niche for himself as one of the best brains in the sector. Currently, he builds houses in Lekki axis. He has become the toast of real estate Investors.

Sir Olu Okeowo is the CEO of Gibraltar Construction. He just completed a mini-estate in Ikoyi, behind the ongoing office project of Aliko Dangote, off Queen’s drive, Falomo-Ikoyi Lagos. He builds only in the highbrow locations. He’s one of the few property players who have never compromised standards. The Gibraltar boss is one of the leading players in that sector who has maintained consistency.

Chief Emeka Uzoeto is the CEO/MD of 1st Homes Limited; a reputable construction company. Chief Emeka is undoubtedly one of the top property players in Lekki presently. He has built over 50 housing units this year alone. He has ongoing housing projects in Osapa London, Victory Park, Agungi, Chevron area, all in Lekki.  He has become a strong developer in that axis.

Engr. Toyin Adeyinka is the Managing Director and Chief Executive Officer of Sparklight group. Currently, they have massive housing projects in Magboro which are selling at affordable rates. He is a man with over 30 years of experience in the real estate sector.

READ ALSO: WHY MY MARRIAGE TO COMEDIENNE, PRINCESS CRASHED 6 WEEKS AFTER WE GOT MARRIED – EX-HUSBAND, SHOLA JEREMIAH

Unveiling 30 Real Estate Players Who Are Doing Well was last modified: May 8th, 2019 by Isaac Abimbade

Why My Marriage To Comedienne, PRINCESS Crashed 6 Weeks After We Got Married – Ex-Husband, SHOLA JEREMIAH

Things You Can Do To Make Millions...

6 Benefits Of Having Genuine Title Documents...