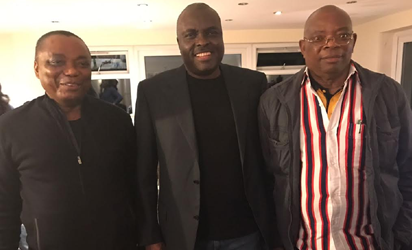 There is no doubt that Chief James Ibori, a former Governor of Delta State has created a Political dynasty that is a formidable political structure in the country. Since its advent in 1999, the dynasty has continued to determine the swinging of political pendulum in  the state. The structure as it stands today cuts across party lines as members of other  Parties  outside Ibori’s party, the People’s Democratic Party (PDP), are still very loyal to the former Governor and are always ready to obey his political commands at any point in time. City People’s Deputy Editor, SUNNY OJEIDUMA brings you 50 prominent members of this great political dynasty.

Rt. Honourable Monday Igbuya is a Speaker of Delta State House of Assembly. Senator Ighoyota Amori he represented Delta Central in the Senate and a former Commissioner of Education. Chief Henry Ofa’s  a former member of Desopadec. Senator Patrick Osakwe is a three time member of the Senate.

He represented Delta North in the Senate.  Princess Pat. Ajudua is a member of the Delta State House of Assembly. Senator Ovie Omo-Agege was an Executive Assistant to Chief James Ibori and now a Senator on the platform of APC representing Delta Central in the Senate. Rt. Honourable Sam Obi, was Speaker of Delta State House of Assembly and once acted as Governor of the State. Chief (Mrs) Odora Giwa Amu was Commissioner for Women Affairs under Ex-Governor Ibori.  Chief Solomon Edoja is a Senior Special Assistant to Ex-Governor Ibori. Senator James Manager is  a four time Senator representing Delta South in the Senate.

Hon. Love Ojakoro was Commissioner of Finance under Chief James Ibori. Dr. Alex Ideh was Commission for Water Resources. Barrister Kingsley Oniaro is the deputy governor of Delta State. Rt. Honourable Friday Osanai is the Deputy Speaker of  Delta State House of Assembly. Magnus Onyibe he was Commissioner for Information in Ibori’s administration. Chief P.D. O Akpeki was Commissioner for Housing in Delta State.   Honourable Mercy Almona –Isei   was a member of the House of Representatives. Chief Sunny Onesoke is a leader of PDP and former governorship aspirant. Chief Government Ekpemukpholo. a.k. a Tompolo is a leader of PDP. Chief Charles Obule is a leader of PDP.  Chief Emma Ayiri was a leader in PDP but now a leader in APC. Chief Solomon Ogba was Commissioner of Sports under Chief Ibori and he is now President Athletics Federation of Nigeria. Amaju Pinnick was Chairman Delta Football Association and  now President Nigerian Football Federation. Barrister Kingsley Escso is Chairman of Delta PDP.