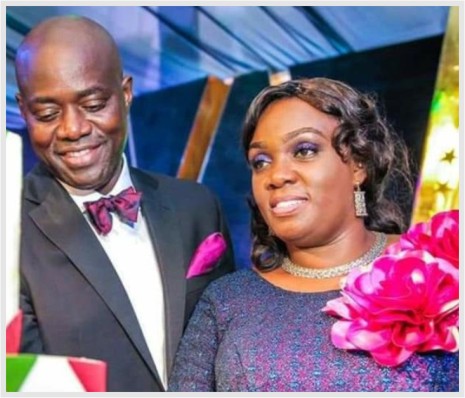 Ibadan like most cities in Nigeria has its set of celebrity couples. City People Magazine has been able to identify a few of them who are currently making waves in the ancient city. These are couples like Zito & Bukola Peller. Bukky is a Pharmacist. She owns Mosh Pharmacy in Bodija. Zito is Shina Peller’s elder brother.

There is Dr. Akin Fagbemi, the Executive Chairman of OYRTMA (Oyo State Road & Transport Management Agency) and his wife, Augusta. There is also Muyiwa Ojo & his lovely wife Omowumi. Muyiwa is the CEO of RSS, a Real Estate company at Alalubosa GRA. Mowumi, popularly known as Omo 1 is a Branch Manager with POLARIS Bank.

Lets also tell you about Soji Olagunju, the CEO of HURLAG Engineering Services. Soji Olagunju is a solid guy but very private. There is also Femi & Debbie Laniyan. There is also Deji & Tosin Osinowo. Of course, we can’t forget Alhaji Bashy Kuti & Bisi his lovely wife Bashy is the super successful designer in Ibadan. There is also Alhaji Tunde Ologburo and Bola, his wife. How about the highly accomplished Ibadan businessman Chief Yinka Fasuyi & his beautiful wife, Bisi.

Also on our list is the 1st Lady of Oyo State. She is an accomplished woman. She and her husband, Gov. Seyi Makinde have always been a successful couple. Though she helps her husband, in her capacity as 1st Lady, she’s mostly in the US, managing her chain of business. She also spends quality time taking care of her kids.

Below are more couples we admire in Ibadan.

Though they are not very popular on the social scene but Mr. & Mrs. OLADOKUN are definitely one of the celebrated couples in Ibadan. The couple are the brains behind the popular microfinance bank, Self-Reliance Economic Advancement Program (SEAP). They do things together including running of their chain of businesses. They are highly romantic too and unpredictable. They have decided to celebrate their valentine with the less privileges. That is another thing they are known for, giving. They own an NGO and through it several souls have been touched positively.

Until recently that his business and philanthropic gestures brought him into the public glare, Engr. Dotun Sanusi has been that Ibadan silent rich dude. Despite his enormous wealth, he remains very humbled and respectful. Another thing many people may not also know about him is the fact that he is a family man. He loves his children and cherishes his wife dearly. Chief (Mrs) Joyce Bellema Sanusi and her husbands are each other’s best friends and gist partners. Whenever she is seen around her husband, one will not but see the love written all over her face. They always spend quality time together and shower one another with expensive gifts, especially on special days like Valentine’s Day. But guess what? Dotun Sanusi too is an unpredictable man, he may decide to use the opportunity to visit some motherless homes in town, alongside his wife.

Bukola and her husband, Zito are one of the hot couples in Ibadan. Zito is the son of the late popular magician, Professor PELLER. He is the elder brother of the Oyo Federal honorable and the Aquila Boss, Shina Peller. Bukola, a Pharmacist, runs the MOSH Pharmacy and Supermarkets at Bodija, Ibadan. Though every day is a special day for Zito and Bukola but they will definitely treat one another specially on Valentine’s Day.

Though Sola and Deola have been popular before now but since their elaborate wedding in Abuja last year December, they have become one of the most talked-about couples in Ibadan. Deola is the beautiful daughter of Senator Adeyemi Smart and a consultant while the husband, Sola (@malivelihood) is a luxury jeweller. The couple also runs the popular No1 Hotel and Lounge on Adeoyo Roundabout, Ring Road, Ibadan. With or without Valentine’s celebration, Sola and Deola always spoil one another with expensive gifts. Deola’s nails, phones and other accessories are always studded with several millions of naira worth of diamonds, courtesy of her jeweller husband.

‘Kay’, as he is popularly called on the social scene and his lovely wife are one of the young, wave-making couples in Ibadan. Kayode Ogunlowo is an auto dealer while the wife is P.A to the wife of the late former governor of Oyo State, Senator Abiola Ajimobi, Chief (Mrs) Florence Ajimobi. They are one of the popular couples in Ibadan, and Valentine’s celebration is always special, not only for the couple but also for those around them. They both love giving.

Though the former Deputy Governor of Central Bank of Nigeria and the gubernatorial candidate of APC in the 2019 election, Chief Bayo Adelabu rarely steps out with his wife at social functions. But one thing that can’t be taken away from him is the fact that he is a family man to the core. He adores his children and cherishes his wife so much. He spoils her silly with so much love and affection. His 50th birthday celebrations gave many people the opportunity to meet his wife for the first time.

If you have seen the popular businesswoman and top textile merchant at Aleshinloye Market in Ibadan, Princess Ronke lately, you don’t have to be told that she is happy and in love too. She looks elegant and as beautiful as ever. She remarried officially last year. Though the wedding with her London-based businessman husband was a low-key one but their honeymoon was celebrated in both London and Nigeria. They may replicate the same treat on Valentine’s Day.

The astute banker Laide Oladeji and wife, Bolatito are very popular in Ibadan. Though the wife is more reserved while the husband is a socialite. They are each other’s best friends and attend parties together mostly. They are gist partners and unknown to some people, Alhaji Olaide is a family man to the core. He can spend any amount of money on his family. In a valentine period like this, Laide is the type that will take his wife out for a special treat.

Femi Akerele, the President of Ibadan Polo Club and his lovely wife, Jumoke are another lovely couple in Ibadan. They are always all over each other whenever you see them at social functions. Femi Akerele is a handsome guy and a loving and caring husband to his wife. Every day is like Valentine’s Day for Femi and Jumoke Akerele.

This is another lovey-dovey couple in Ibadan. Otunba Abayomi Kofoworola of YOMDEX Events and his lovely wife, Yeye Adedotun Olaitan are well known. YOMDEX, as the husband is fondly called, is always doting over his wife. When she clocked 50 last year, he bought her a brand new Toyota Venza. In fact, every Valentine has always been a double celebration for the Olaitans; the wife’s birthday is February 23rd.

He is the man in charge of the popular plastic furniture company (Omo Gafo) in Ibadan. Wale Omo Gafo, as he is popularly known, works hard and doesn’t joke with a moment like this, to show love not only to his wife and family but those around him.

The Ibadan-based Juju musician, Yinka James, popularly known as Adonai, is a lovable man. He adores and showers his wife with lots of love and affection at any given point in time. Yinka and Kemi are two lovebirds, they are inseparable.

Engr. Taiwo and his wife are a well-known couple in Ibadan. Their Valentine’s celebration always comes with so much fun and gifts.

‘Ike Bashir’, as he is popularly called, and his wife, Lara is a cute and lovable couple. Bashir is the popular fashion designer behind ‘Opulence Crearation’, while his wife sells clothes, shoes and bags and accessories of both sexes. Their program for Valentine’s Day can be predicted, they may be at the Golf Club later in the evening, as the club always organise a special program for Valentine.

“I keep falling for you over and over again, no matter how old we get. May this big day you celebrate be as incredible and beautiful as you are. I love you so much my dearest Chief (Mrs) Augusta Ideakheua Fagbemi.”

The above is the excerpt from the Executive Chairman, Oyo State Transport Management Agency (OYTROMA), Mogaji (Dr.) Akin Fagbemi’s touching message to his wife on her birthday last year. They are a lovely couple, and despite their tight schedules, they spend quality time together as a couple, especially on an occasion like Valentine’s Day.

Adeyemi and Kikelomo Idowu are one of the well loved and respected young couples in Ibadan. They love one another to a fault and they have never hide it. Their favourite holiday location has always been Maldives, but this year’s Valentine’s Day may be a little bit different. They are most likely to have a private dinner away from home with soft music, in a romantic environment as well. Kikelomo is an events stylist & planner. She is the CEO, Kyksie Drapes Events. While her handsome husband is a Marine Engineer.

They are young, vibrant and a resourceful couple. Yusuf and Taiwo Dawodu are the busy types so they don’t joke with any opportunity for them to have a good time as couple. The husband is a Loan Underwriter, while the wife is into Consumer Sales. Their favourite holiday location is Chicago. They are planning to go on road trip and try out different cuisines for this year’s Valentine’s Day celebration.