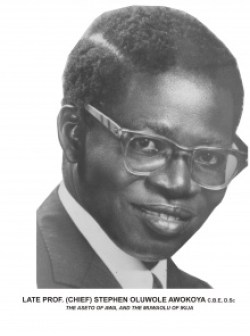 •The Story Of Prof. STEPHEN AWOKOYA

It is no longer news that late sage, Chief Obafemi Awolowo introduced free education in the 50s in the old Western region. But what many don’t know is the brain behind the policy. He is Professor Stephen Awokoya. Unknown to many the blueprint of free education was an exclusive idea of Nigeria’s first Chemistry Graduate and first Minister of Education, Late Prof. Stephen Awokoya. On Tuesday 20th March 2018 at the Muson Centre the Stephen Oluwole Awokoya Foundation for Science Education held the 23rd Annual Lecture, Award of honour and post graduate scholarship.

Speaking to City People at that event, one of his sons, Dr Folarin Awokoya, and Prof Olusola Adeyeye who is the Chief Whip of the 8th Senate, revealed that Stephen Olukoya introduced and implemented Free Education in Nigeria as far back as 1952 while he was a minister.

Awokoya and the Action Group’s comprehensive approach to education, especially introducing indigenous goals was not the first in colonial Africa, Ghana then called Gold Coast had a leg up in indigenous focused development, a staple of Awokoya’s educational policies.

In 1951, Nkrumah and the Minister for Education in Ghana had introduced an accelerated development plan for education, which included universal primary education without fees, similar to Awokoya’s line of thought. Awokoya’s approach to education was to be less derivative in structure and approach of knowledge dissemination but should introduce more indigenous methods and ideas.

He also sort a less inhibiting educational program. He attacked what he felt was the primary motive of colonial education: to limit the minds of indigenous Africans in achievements in science and technology and to imbibe in them the benefits of agriculture and farming. He felt, the result was leading to a dependency on imports, with little base for industrial growth and confining traditional Africans to the background in knowledge, knowledge production and production.

Awokoya’s policy was to make education a necessary catalyst for local production of goods, the development and acquiesce to modern science and technology and upliftment of the minds and souls of Africans.

A major critical measure of the policy was also to produce indigenous graduates who can administer the various local, regional and central administrative organs and structures. Awokoya also challenged the dominance of male in education, at the time the ratio was about 4:1.

Most of the education policies of the era led to the doubling of major indices including budgetary allocations to education. Primary school enrollment, number of teachers and primary schools all showed significant growth.

He left his position as minister after arguments with Awolowo about education funding, Awokoya desired free UPE while Awolowo was skeptical. Also both men were fighting for recognition as originators of the universal primary education. He formed his own party, the Nigerian Peoples Party.

In addition to this fleshy historical document, Prof Adeyeye, who was a staunch follower of Awolowo added,
“The schism between Awolowo and Awokoya didn’t come as a surprise to me because Awo was a lawyer, you know lawyers are story tellers. Awo was a strong believer of metaphysics, he would talk about the elements of fire and water and all that. Awokoya has enough sense to that even a 13-year old boy in Athens knows that Water is not an element but a compound of Hydrogen and Oxygen. So, some of these things that Awo was counting as metaphysical hogwash, because the truth is more of the science are before Christ. Socrates, Plato and Aristotle, lived before Christ.

“Awokoya knew that arrays of elements beginning from Hydrogen all the way to Uranium, and that in a science laboratory, you can you particles of these elements and create Nuclear Weapons.

“So, as Awo was living in the metaphysical ideals, Awokoya, the chemist just made him understand Baba, you miss road o.. and made it clear that if he really wanted to get back on the right track, we must get sound education.

“And it must be in the record, the last thing that Awo did before he left the Gowon’s government was to mastermind the Second National Development Plan. He carefully presented the template as if he knew he was not be given the chance to be in government again.

“There was a place; a stipulation of the National resources from the center being given to every Nigerian child such that every child in primary school will be allocated 10 naira per year to support the state where that child goes to school and in secondary school, every child gets 40 naira per year. You might wonder why 40 naira, those who are old enough to remember that in western region school fees per term, school fees is 6 pounds 13 shillings 4 pence. For tuition, we came to 20 pounds per annum, which became 40 naira.

“So, Awo gave us a plan where that was catered for every time. Fast forward to 1979, Below Ogun State, Lagos, Ondo, Oyo and the UPN state, on October 1, announced free education.

So they were entitled to collect 10 from the central per child in primary school, they were entitled to collect 40 naira per child in secondary school. The battle in power and the political juggernauts, found out that the UPN states were the ones collecting bulk of the money. And they cut their nose to stamp their face they then said they were going to abrogate that plan. That was what caused the beginning of the problem for UPN states not having enough money to execute the programme. But Bisi Onabanjo, may god bless him, P Ajasin, Ambrose Ali, and Lateef Jakande.

“Because when you take hope of the people, what you have is despair and hopelessness that forms a desperation that will make somebody say he wants to go to heaven and marry 7 virgin, while your body will remain here on earth.

“May God give us a Nigeria again, with the National Plan such that regardless of how poor we are or circumstances of our economy, that there will be enough resources to take care of everybody in Primary School, and everybody in Secondary.
“May God help us to create a new Nigeria