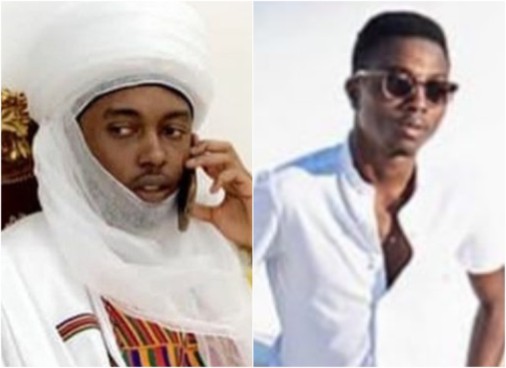 Up North, there are some hot and rich bachelors some ladies look up to. These bachelors are rich kids of rich prominent Nigerians. They went to ivy league schools. Some run their personal businesses while others take after their father in business. Society parties will never be complete without these guys and week in week out, they are attending weddings. They are always the most sought after because they also add colour to events. From time immemorial, we have seen them dominate the party scene and have also stepped up their games in matching up to the dictates of the society.

When it comes to these super-rich big boys, they cut across every sector, in different states, Abuja, Borno, Bauchi, Adamawa, Kano, Kaduna and others. They are easily recognized wherever they go, they make parties tick and are very supportive of each other. They are all successful in their careers and are very rich. Times without number, they always sit together as a caucus and their tables have never been dry of choice champagne and cognacs. Their table always overflows with quality wines and drinks throughout any party. They drive exotic cars and many girls hook their eyes on them for friendship. Number one on this list is President Buhari’s son, Yusuf.

Yusuf Buhari is a graduate of the University of Surrey and the only son of President Buhari. He lives a very low profile life despite being the president’s son. Alilu Atiku Abubakar is the son of former Vice President, Atiku Abubakar. He got a master’s degree from a prestigious university abroad. Lamido is set to follow his father’s footsteps after contesting for House of Representatives in the last general elections. He also holds his father’s former traditional title, Turaki of Adamawa.

The Indimis are one family in Borno who are very wealthy, popular and influential. Alhaji Indimi has four sons who are hot bachelors. Tijani and Habib are the oldest among the four INDIMI boys.

Aminu Waziri is the son of Alhaji Waziri. He is very rich and extremely handsome. He is one of the hottest bachelors in the north. In his early 30s, he owns a football and relaxation lounge in Kano. Usman Ibrahim Shema is the son of Katsina State’s former governor, Alhaji Ibrahim Shehu Shema. He holds an LLB degree from the University of Buckingham. He is a lover of Polo. Shehu Umar Yaradua is the son of former President of Nigeria, late Umaru Musa Yaradua. The Yaraduas are known for their captivating looks. Ashraf Sanusi Lamido is the son of the former emir of Kano, Sanusi Lamido Sanusi and former CBN Governor. Ashraf graduated from the University of Portsmouth. Muhammad Ali Mustapha is a self-made billionaire in his mid-40s, born, brought up and based in the United States of America. Malah Sheriff is the brother to Sheriff, they are both rich kids. His family pedigree speaks affluence, his chains of friends cut across.

Murtala Mamman Ali is among the owners of Wrace conglomerate. He is into real estate and also an oil magnate. Nasir Bukar Ibrahim is the son of the two-time Yobe governor and still a serving Senator, Alhaji Bukar Abba Ibrahim. His mother is a member of the House of Rep and sister to Ali Modu Sherriff which makes him a cousin to Malah and Sadiq Sheriff.

Abubakar Shehu Abubakar is the Emir of Gombe and he is very single. He is 42 years old. He ascended the throne 6 years back when his father, Emir Shehu Abubarka died. Before his turbaning in 2014, he was the executive director of horizon interlinked global resource and chairman of Kliptown Lagoon Nigeria ltd.

Popularly called Abuja finest, Abdulwahab Bayero is the head of Abuja’s popular fine boy swag, (FBS). A clique mostly consisting of hot rich guys. Musa Ado Ibrahim is an Ebira Prince, he is the grandchild to the current Emir of Ebiraland, the Ohinoyi of Ebiraland.

Awo Rabiu is the grandchild to the late Khalifa Isyaka Rabiu, founder of IRS airlines. He is the nephew to billionaire businessman, Alhaji Abdulsamad, Chairman of BUA Group companies. He runs a thriving company which is a sister company to BUA Group. Bello Umar Ajiya is also a member of the fine boy swag. He runs the popular ice cream company, Kreamy cones. He is the son of the chief financial officer of NNPC.

Bashir Tofa is the Nephew to Bashir Othman Tofa, the National Republican Convention candidate in the annulled Nigeria’s June 12, 1993 presidential election, which was organised by the military government of General Ibrahim Babangida.

Bashir Jnr graduated from Malaysia and currently works in CBN. He is also the brother of Hadiza Tofa(Zamfara Deputy Governor’s wife). Ibrahim Shema, his brother Usman, just got married a few weekends ago. Malan is also a lawyer and polo player. This Barrister thing runs in their blood.

Sadiq Dantata, his name speaks money. Is there any northerner that doesn’t know his Grandfather, Billionaire businessman Alhaji Alhassan Dantata? If you do your calculations right, he is cousins with Africa’s Richest Man Alhaji Aliko Dangote. Sadiq is currently based in San Francisco, USA. Their genes are definitely made of hard cash. Sadiq is a polo player by passion.

Saleem Danagege is a Dubai Billionaire, born and brought up in KSA. Saleem runs a rich and luxurious playboy lifestyle. He is best friend with Sadiq Dantata and friends with a lot of elites and celebrities like Davido and Falzthebadguy. His ability to travel the world in a whim is always intriguing.

Muhammad Seerajuden should be a travel blogger because of his potential to travel to almost 6 countries at one go. He hails from Daura, Katsina State ( the president’s hometown) and probably his distant relative, our sources say. With his splendorous lifestyle, no doubt his honeymoon location will be Santorini.

Mohammed Madugu is a Pilot who studied in Florida’s aviation school, USA. We can all remember the first time he flew his mom across the country as the captain made our hearts to be so full of emotions. Mohammed currently works with Emirates Airlines.

How about Sanusi Dantata? Remember Sadiq Dantata from yesterday? Yes, he is his cousin and also Baba Aliko’s. Sanusi is also a polo player by passion. Most of the Dantata’s are. Some say he is the best polo player from Kano right now.

Sadiq Rabiu was born with a Diamond spoon, He is from both late Alhassan Dantata and Isyaka Rabiu’s Grandson. He is the CEO of SMRpaints and SMR Nigeria Limited, a transport and haulage service company. Sadiq is also a polo player as it is in the Dantata genes.

Muhammad Yuguda is a pilot that studied in Florida’s flying School. No one needs to tell you he is former Bauchi State Governors, Isa Yuguda’s son.

AbdulSalam Atiku is another Atiku Abubakar’s son we don’t know about. He must really be hiding them somewhere. Abdul is based in the UK. The Atikus are really good looking though.

Mustapha Sani Abacha, the last baby born in Nigeria’s Presidential villa. Musty is really good looking just like the rest of the Abachas. Huddaya is his Sister in law so we most definitely can’t wait to see what his bride is going to wear. Musty graduated from his mother’s University in Maradi, Niger.