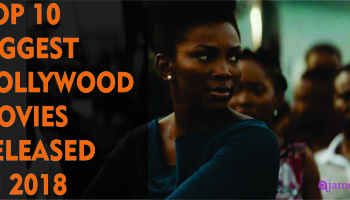 THE GHOST AND THE TOUT

The Ghost and the Tout is a comedy movie. It follows the life of a young lady who grew up in the ghetto. She met a ghost in need of her help to communicate with the people he left behind after an unfortunate incident.

Soon, her life is thrown into a series of drama that only her can see and understand. The move which was released on May 11, 2018, grossed 80 million  one week after it was released.

Remi Martins (Falz The Bad Guy), Amaju Abioritsegbemi  (Ay the Comedian), Ayo Alesinloye (Ramsey Nouah), Naz Okigbo (Jim Iyke), are Abuja’s most eligible bachelors. They have thriving businesses, palatial homes, fast cars, and attention of women in short supply. They are known as the Merry Men, but the ladies call them the Real Yoruba Demons.

Directed by Toka McBanor, it stars Ayo Makun, Ramsey Nouah, Jim lyke Falz. It was released on September 28, 2018. Merry men made 230 million of release to cinemas.

Chief Daddy is one of the best and highest grossing movies of 2018. The movie featured Falz the bad guy, Chigul, Nedu.

It tells the story of a billionaire, Chief Beecraft, a flamboyant benefactor to a large extended family of relatives, household staff and assorted mistresses, Chief lives really large until he dies and everything changes.

The movie was directed by Niyi Akinmolaja, it stars great actors like Funke Akindele, Linda Ejiofor, Zainab Balogun, Bisola Aiyeola. It was released on December 14, 2018 and has raked over 280 million.

It is a story about two mothers  Omoni Oboli and Funke Akindele. They live in the same neighbourhood but totally hate each other. Hell breaks lose when their children who attend the same school are the top of the class in competition. Just imagine the drama we will get when both mothers want her own child to win the competition. It is a story about Rivalry, drama and bonding in spite of everything.

The movie was directed by Omoni Oboli, it featured stars like Funke Akindele, Yule Edochie, Alvin Abayomi amongst others. It was released on August 17, 2018. Mom at War made 65 million at the box office.

Genevieve Nnaji released  “Lion Heart” this year after her very long break from Nollywood and she didn’t disappoint. Lion Heart is the first movie from Nigeria to be owned by the American movie streaming platform.

It is a story of a female in a male dominated industry. A young lady Adaeze (Genevieve Nnaji) took up the challenge when her father, Chief Ernest Obiagu had to step down from his company due to Health issues. She works with her brother who has odd behavious, so the family business can be saved from financial difficulties, this brings crazy and often hilarious results. Directed by Genevieve Nnaji Onwenu, Peter Okoye.  Released in Nigeria in 21st Dec 2018.

Despite being released towards the end of the year, Kemi Adetiba movie  “King of Boys” is no doubt one of the highest grossing movies in Nigeria in 2018.

According to the film maker, it has made 103 million at the box office for only three weeks.

Unveiling The Top Grossing Movies Of 2018 was last modified: January 7th, 2019 by Reporter