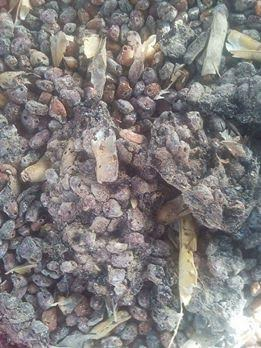 BBOG member and spokesperson of Chibok, Manasseh Allen, who also made allegations that some IDPs at the Teachers village camp in Borno state were being fed with rotten beans, just gave an update on the story. He was at the camp alongside the Chairman of the State Emergency Management Authority SEMA and they carried out some investigations.  Read an update written by him below..

This morning I was at the camp as promised yesterday night, even though the Borno State Emergency Management Agency (SEMA) Chairman Engr Satomi Sale couldn’t make it to the camp due to his attention needed at the scene of bomb blast this morning in Maiduguri, but his team were on ground headed by the Camp manager, a SEMA staff and his colleagues.Findings:
1. We all were on the same page and agreement that there was sharing of beans.
2. Good portion of the beans was badly affected by fungus, matted as result of moisture, maggots and weevils.
3. There was delay in supply of the food to the camp for about 10 days according to SEMA, because they do monthly rationing, while the IDPs insisted on the earlier number.
4. The above point three is still matter of argument by the IDPs because they said, how can few measure of food last them a whole month, which all sides agreed that it cannot be enough but that’s what they are provided with to share.
5. SEMA don’t buy food, they share what is given to them by NEMA: SO NEMA supplied the spoilt/bad beans to SEMA to distribute which they did.
6. They noticed the bad aspect of the beans and asked the IDPs to exercise patient let them return the beans, and exchange it later, but because of absence of food for some days, the IDPs decided that the beans be shared, for them to select edible portion out.
7. There are so many complaints and agitation in the camp, which the officials reported formally and are waiting for some to be properly addressed. To reduce tension and build trust between officials and the IDPs.
8. On meeting with SEMA chairman, he affirmed that he did not authorise sharing/ distribution of food day before yesterday because the quantities won’t go through all the IDPs but was working hard to add more food supply to go round for distribution today.
Development: They now have received more supplies in their camp stores various food items, from PCNI, NEMA, and Workd food program (WFP) – pictures attached.
Points of agreements:
1. The challenges of feeding in the camps if real and need us all.
2. SEMA don’t have food to share but they supply condumments by state government. They only share what is given to them by FG or other donor partners and intervention agencies.
3. There is need for us all to sustain advocacy for support and coordination on the Northeast humanitarian crises
4. The Chariman commend the efforts of those who called on him to act to avert sicknesses as result of eating the bad food stuff. He called all as “citizens living our duty calls of supporting other citizens with voices for action”
5. We agreed to maintain recommended laws and regulations and statutory bodies in reporting or searching for information.
6. The SEMA staff in the camp have been doing just what was directed as per ration available and can’t do more than what is given to them. And also agreed that the IDPs need increased ration and frequency of distribution.
7. The chairman call on all of us to stand in support of the upcoming Oslo conference of donors to drive home more support for the Nation. Where I explain our early call and concept note on the Multi donor trust fund. And meeting of concerned citizens will be called to have our submission through factual information that would bring solutions as we plan relocation and reintegration of the displaced persons.
8. NEMA should identify the source/supplier of such food items and ensure refund or ban of the contractor: that is accountability to public money and to avoid disease outbreak and or organs failure which is common now in Maiduguri.

Update on allegations of IDPs in Borno state being fed with spoilt beans was last modified: February 17th, 2017 by Reporter

BREAK US UP: Wife Seeks Divorce From Drunkard Husband After 15 Years