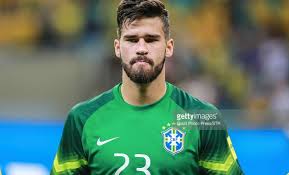 Brazilian goalkeeper Alisson is in Liverpool to complete a medical ahead of his £67m move from Roma.

It is the final hurdle in the transfer, according to Sky in Italy, with Alisson having travelled to England on a private jet on Wednesday evening after already agreeing a five-year deal.

He will become the world’s most expensive goalkeeper after Liverpool’s offer surpassed the £34.7m Manchester City paid for Ederson in 2017.

The deal was too good to turn down, according to Roma sporting director Monchi.

“We haven’t finalised anything yet [with Alisson],” he said on Thursday morning. “But it is true that the negotiations are advanced and he’s over in Liverpool now.

“When a very substantial offer comes in, you have to consider it. We weighed up the pros and cons and decided to speak to Liverpool.”

He added: “Selling Alisson would not show a lack of ambition. For me, ambition is about doing the right thing after thinking everything through.”

Alisson made 49 appearances for Roma last season, including the 7-6 aggregate defeat to Liverpool in the semi-finals of the Champions League.

Liverpool have now agreed to sell goalkeeper Danny Ward to Leicester City for £10m, according to Sky sources