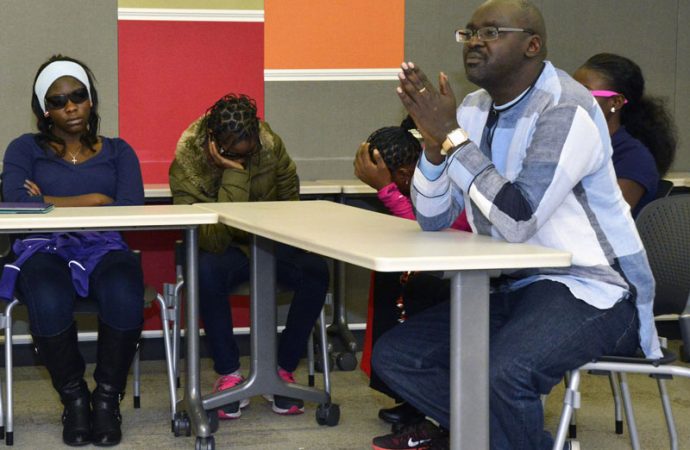 A United States-based human rights activist and lawyer, Emmanuel Ogebe, has dragged the Federal Government to court over 10 Chibok girls schooling in the US.

Ogebe, through his lawyer, Barrister David Ogebe, is asking for $5 million for defamation.

The defendants in the suit are the Attorney-General of the Federation and Minister of Justice, Abubakar Malami; the Minister of Women Affairs, Hajia Aisha Alhassan; and her ministry.

In the suit, the plaintiff accused Hajia Alhassan of telling the whole world at a news conference that the 10 Chibok girls his organisation took to the US for studies are not in school.

Ogebe, in the suit, said around June 2014, he and some humanitarians who are indigenes of Borno State conceived the “study abroad project” specifically to assist the abducted/escaped Chibok schoolgirls after observing during a United States of America congressional fact-finding trip at the time that nothing was being done for them individually and as a group.

According to him, to actualize the project, the Education Must Continue Initiative was duly birthed as a non-governmental organization under Part C of the Companies and Allied Matters Act Cap C20 LFN 2004 to serve as the charity to provide quality education for the escaped Chibok schoolgirls and other victims of the insurgency.

Ogebe said through the EMCI and his personal efforts, 10 of the escaped Chibok schoolgirls were granted admission with full scholarships in the United States of America and were subsequently taken to the US where they were enrolled in and began school within a week of their arrival with the plaintiff duly authorized as their guardian by their respective families.

But, according to the plaintiff, despite his effort to get the 10 Chibok girls to study abroad, the women affairs minister came out to say that the girls are not schooling in the US.

He is asking the court for the sum of $5 million as exemplary and aggravated damages.

The US based lawyer is also asking for an order of perpetual injunction restraining the defendants either by themselves or through their privies from further defaming his character whether by print, electronic or online media.

Ogebe is also asking the court to write a letter of apology to him and publish same on all social media news platforms, in two national newspapers in Nigeria and one newspaper circulating in the United States of America.

“For dubious reasons, the Defendants spearheaded by the 2nd and 3rd Defendants began a malicious campaign to tarnish the image of the Claimant culminating in a press conference convened by the 3rd Defendant, Hajiya Aisha Alhassan on September 9th, 2016 and aired to the whole world through print, electronic and online media where the Defendants alleged that Claimant took the Chibok girls to US under the guise of taking them to school but did not in fact do so thus warranting the government’s intervention. The Plaintiff hereby pleads and shall rely on three online media reports of the news conference of the 2nd and 3rd Defendants covered by (a) The Cable News online report of 09 September 2016; (b) Premium Times online News Story as published on allafrica.com website also of 09 September 2016; and (c) Anadolu Agency online publication of 09 September 2016 as published on the aa.com news website.”