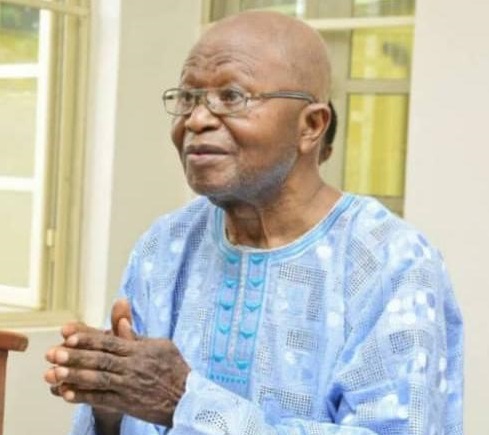 A popular figure and an erudite scholar Sir Chief Anthony Ayoola Adeleke has passed onto glory at the age of 84. He was the Life Grand Patron of United Vanguard of Nigeria, Oyo until his death

The Baba Ijo of Cathederal as he was popular known before his death is set for burial in October 2020 as announced by family.

Sir A.A Adeleke, was a devoted catholic, an Oyo Patriot and a teacher par excellence. He was an outstanding principal with exemplary records at Isale Oyo Community Grammar School, St Bernardines Grammar School and Ladigbolu Grammar School Oyo before he retired from active service. He was appointed as the Life Grand Patron of the club, United Vanguard of Nigeria, Oyo founded in 1988. He was a great teacher and mentor who would always be ready to offer moral and financial support to the youth, his unalloyed interest in the development of Oyo was unique.

The Funeral Mass shall also hold at Our Lady of Assumption, while the Final interment will be held at  Catholic Cemetery, Opposite St. Augustine Primary School, Odo-Aro, Apaara, Oyo.

He will be missed by family and the members of UVAN

He had a brief stint at Western Nigeria Television (WNTV), then taught Physics and Mathematics at St. Charles Grammar School, Osogbo before moving to the University of Ife where he studied Physics as a major in 1963.

Upon completion of his Bachelor’s degree he took up a teaching appointment at Oranyan Grammar Schools, Oyo from 1968 to 1975 and was later appointed vice-principal at Ogbomoso Baptist High School from 1975-1977.

As member of some professional and community organisations, the late educationist was the 1st Vice President of ANCOPSS, Old Oyo State between 1984 -1986; member of the Science Teachers Association of Nigeria since 1969. He similarly authored and co-authored a number of science publications.

He was a strong community leader and advocate, thereby serving as a member of the Coronation committee for the historic coronation of Alaafin of Oyo in 1971.

In the early 70s, he was the Secretary of Atiba Movement, Oyo, a strong socio-cultural organisation of eminent Oyo elites, serving as a powerful advisory to the Alaafin of Oyo-in-Council; a member of the strategic Oyo think tank that pushed for the creation of Oyo as capital of New Oyo State, creation of three other local government councils – Oyo West, Oyo East and Afijio local government councils.
He was also involved in the push for the creation of National Television Authority studios in Oyo town.

Being a committed Catholic, he was inducted to the Order of Papal knights – as a Knight of St Gregory by His Holiness Saint Pope John Paul II and became the Baba Ijo of Our Lady of the Assumption Catholic Church, Oyo.

Baba was a passionate sports lover, he supported IICC shooting stars FC, Ibadan and Derby County FC UK and was President of Oyo Tennis Club for many years during his active time.