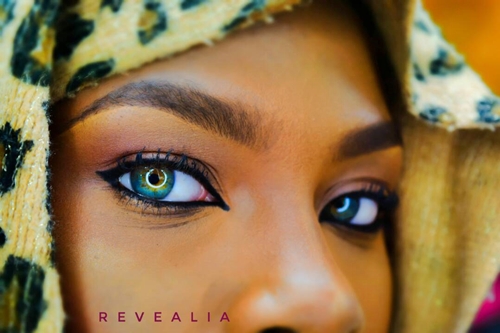 A girl who sells vegetables with her mother at Mile 12 market in Lagos state was commended as many say they do not know Nigerians can boast of such eyes as multi-coloured eyes are not something too common in the country. Many have also wondered what could have led to the colouring.
Contrary to reports that the multicoloured eyed girl has a health condition with her eyes, reports now confirm Peace is fine as long as she doesn’t complain of any eye problems as she has now undergone a proper photo shoot.
The photographer who discovered Peace also released a statement, read below:
“Her name is Peace Samuel Omana, she is pretty and so brilliant. Some of her classmates who were available at the photo shoot described Peace as being calm, nice and a lover of Mathematics. Her school mates also said they always teased her about being miss Nigeria.
“Her parents are so grateful and optimistic that this would bring an end to poverty in their lives they are thankful for all the positive comments and love from everyone.
“Transformations can happen overnight to anyone. It’s her time, she is a star. You can tell from her pictures she was born to be!
“A lot of opportunities opening up for her already but I’m being careful with the sort of endorsement she allows so she doesn’t get the wrong attention.” Vegetable Seller with Multi-coloured Eyes Discovered in Lagos Undergoes a Photo-shoot was last modified: August 9th, 2017 by Arinze Ago

Man Caught Sneaking into Farm to Have Sex with Donkey

The Hair Trend That’s About To Take...

350 Models Compete For Slots In Africa...