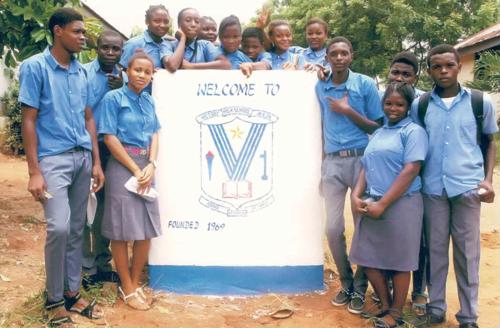 As you read this, the old students of Victory High School, Lagos & Victory College, Lagos are all in a happy mood. We can tell you the reason. Their school is 50.  Victory High School was built in 1969. This week, it will be celebrating the 50th anniversary of the school, founded by Chief Dr. CFI Olaniyan. It is the first school in the whole of Ikeja.

As part of the 50th anniversary, there is going to be a lot of activities from Sept 27th-Oct 6, 2019, all being organised by the old students.

This is a school that has given students the very best, through various motivational programmes and seminars in order to help them know the importance of schooling and how to live right.

The school has also built up lots of great successors who are: owners of top schools and universities both in Nigeria and the United States, great philanthropists. For instance, the first man that ever won a Gold medal in Nigeria is a Victorian. There are lots of lawyers, doctors, musicians, actors and actresses, etc.

The school is one of the earliest private schools in Ikeja. Chief Olaniyan, back then in January 1969, when he was still in his prime, gave birth to the school. In a matter of time, the school boomed and progressed in leaps and bounds and bore many secondary schools and university graduates into the labor market in Nigeria.

The school named Victory High School clocked 50 years in January 2019. Chief Olaniyan’s resolution to be a self-employed individual brought about this solemn decision to found Victory High School and her sister schools. The sole reason of rolling out drums for celebration is not just the coming of age of this reputable institution, but also, to celebrate the founder’s 90th birthday. He is an ebullient and indefatigable man, who is still full of life at 90 years.

This project might not have existed if not for the THINK TANK behind it. It is this group of individuals that have sat and pondered over the objectives of the founding father. It has been therefore resolved that it befits both new and old students, parents and friends, managing proprietor and friends, principal and staff, notable individuals and notable figures in Local, State and Federal Governments, Professional and Politicians, Civil Societies and NGOs private and public organizations, schools and churches to join hands with Victory High School, students staff and the proprietor to celebrate her golden jubilee in late September and early October this year.

The THINK TANK of this project hopes to achieve fame, publicity, repute, kudos, honor, joy, eminence, for all and sundry. The motive is to translate all efforts into cash of about five hundred million naira (500,000,000) to one billion naira (l,000,000,000). Barring all odds, the THINK TANK is optimistic of realizing this huge sum if all worthy contacts are made rightly.

With this huge task at hand, a planning committee has been set up concerning this 50th anniversary which includes the old students of this great school who have been successful in their chosen career both in Nigeria and the Diaspora. At the moment, progress has been made in terms of monetary values and physical contributions to the school towards the 50th anniversary and the proprietor’s birthday. The planning committee is divided into three parts; one in Nigeria and two in Diaspora (UK, USA).

The planning committee in Nigeria is headed by Pastor Mr. Johnson U. Ezeagwu (an old student of the school) has been working relentlessly with other members in Nigeria towards achieving a great feat for this anticipated celebration. The committee in the USA is headed by Mr. Israel and Mrs. Bimbo Famojure, while the one in the UK is headed by Mrs. Adeola Olaniyan. Nevertheless, the distance has not altered a smooth communication between these three committees; they are working hand in hand to make the celebration a glamorous event.

These three golden committees have reached a consensus on what is needed to be done in earnest. They said it should be noted that “rehabilitation of all science laboratories, library, sick-bay, indoor and outdoor games and installation of one hundred sets of computers should be ongoing towards preparing for the grand finale of the occasion; as commissioning of these facilities are designed for the golden jubilee programme that will last for a week”. In view of this, the projects have been divided between the three committees; the USA branch has agreed to furnish the physics, chemistry and biology laboratories, while the UK branch is considering providing furniture and electrical appliances to the classrooms. The Nigeria committee is looking at upgrading landscape, football field, staff room, library, security house and gate that would cost about one hundred and fifty thousand naira (150,000). As at March 10, 2019, it was reported that there is over one million naira in the golden jubilee account, two hundred and forty pounds in the UK domiciliary account while the USA committee has over ten thousand pounds in their account.

In the spirit of preparation for the 50th anniversary, a horticulturist did a fresh planting of flowers in the school compound because of poor fertility of the soil; Pastor Johnson U. Ezeagwu confirmed this.

The major aim of the whole programme is basically funds generation. There will be a book that scribes the genesis, growth and existence of Victory High School at 50 and beyond. It was emphasized that publicity of this occasion should be a priority so that the circulation of news and events would reach people at home and abroad. Also, a website for the school and events will be launched and there will be a compendium of the current and old students, friends of the school and that of the proprietor and dignitaries. In conjunction with the 50th anniversary, Pastor Johnson said that “50 scholarship awards will be awarded to 50 students in JSS1-3 and SS1-3″.

Specifically, in January 1969, Victory High School sprouted to life on an expanse of land in a serene location in Ikeja, now, the capital city of Lagos State. Within a dint of 5 years the population of the school had grown to over 1000 students, and staff strength of more than 150. The impressive growth was cut short when the then Military Government of Lagos State took over the school along with 5 other schools in the state. The Proprietor of the school was not deterred by the singular act of the government. He went forth to set up other schools, Victory Home School, (Nursery and Primary) in Ikeja in 1975, Victory Institute of Catering and Hotel Management, Ikeja 1984, Victory Home School Odeomu, Osun State 1987, Victory Grammar School, Ikeja 1990 and Victory College, Odeomu, Osun State 2002. Victory is synonymous to Olaniyan’s School Baba’s Schools or better still, Victory Group of School Victory Group of Schools are located in Lagos and Osun State of Nigeria.

According to Chief, the school has churned out over 10,000 graduates in the last 50 years. The school is at par with the AONIANS, the foremost institutions of learning in the old Western Region, only that, it is founded and owned by an individual (Private).

Talking statistics of the School Certificate graduates in the past 30 years in southwest Nigeria, amongst one hundred of them, several of them are Victorians and are placed in top-notch. Of 100 institutions, there are 3 to 4 Victorians that are professors and lecturers, and in business circle and politics there are 5 to 10 Victorians exercising power and authority. In echelon of Medicine, Banking and Finance there are 10 to 15 Victorians dictating the pace of the industries.

In the US, a Victorian flew a one time President of America – OBAMA. Also, at least 2 Victorians are very active with space exploration working in NASA.

Back to Nigeria, in traditional purview, in the East, South West, South, South, South and North, many Victorians are Obis, Obas and Emirs and so on.

Victory High School has done a lot in developing Human Capital in the country. It builds a meaningful future for many people in the community.

That is why many old students are emotionally attached to the school. It provides job opportunities either directly or indirectly to many people. It helps to grow the nation. It is an institution of repute.

Why roll out the drums? The Chairman of the Golden Jubilee Anniversary Planning Committee, Igwe Johnson Uche Ezeagu is very emphatic when he says in the Inaugural meeting of the committee that it was imperative in 3 ways for the celebration to hold: (1) To appreciate the legend and astute educator for serving humanity throughout his life by training people in minds, bodies and souls. (2) To appreciate those workers and teachers that helped the school grow to where it is today. (3) To propel the school to the next level by enhancing the facilities in the school to meet the global educational standard.

He said the celebration is to make both old and new students converge and exchange pleasantries and joy that the occasion demands.

No wonder, everyone is enthusiastic about the 50 years of this great school. Old students have been pouring into the school premises apparently ecstatic with a nostalgic feeling of their alma-mater once again.

The celebration will last for a whole week between 27th September 2019 and 6th October 2019. The celebration is tailor-made to coincide with the 90th birthday celebration of Baba Olaniyan, the Proprietor of the Victory Group of Schools in Lagos and Osun States of Nigeria.