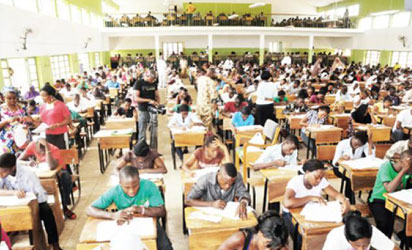 Some  214,952 candidates cheated in the May-June West African Senior School Certificate Examination (WASSCE) and their results have been seized by the authorities.

Mr. Olu Adenipekun, Head of National Office of the West African Examination Council, WAEC, announced this in Lagos as he also announced the cheering news of a seven percent improvement in the number of candidates that passed the examination with five credits.

Last year, 52.9 percent of the candidates recorded the feat. The number jumped to 59.22  percent this year, out of the 1,559,662 candidates that  sat for the examination.

Adenipekun said WAEC was still investigating the exam cheats and that the schools of the students would be duly informed soon.

‘Devil is a liar, I am going nowhere’ – Halima Abubakar