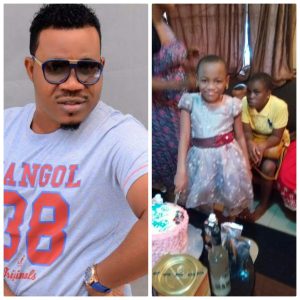 That top Yoruba actor, Murphy Afolabi has a secret love child is no longer news as the Osun State-born actor was in the news in 2013 when a teenage girl of 16 years old came out to claim that she got a baby girl for him, but the actor denied the pregnancy and the baby.

Some months after, popular indigenous programme, Labe Orun, anchors by Segun Adisa on MITV interfered in the case where the actor was invited for a live TV interrogation on the show.

The little girl, Moyosoreoluwa Afolabi has she is fondly called recently clocked 7, precisely on August 15th, 2016 and Yorubamoviegist.com hinted the public about it with exclusive photos from the event.

As you are reading, the story has taken another shape as an insider told YMG.com that the little girl now cries all day, willing to meet her father who does not in any way wants to associate with her.

We further gathered that the inability of the poor girl to enjoy the fatherly roles in her life has gradually been affecting her performances in school.

See Why Everyone is Talking about Wizkid at #TheHeadies2016