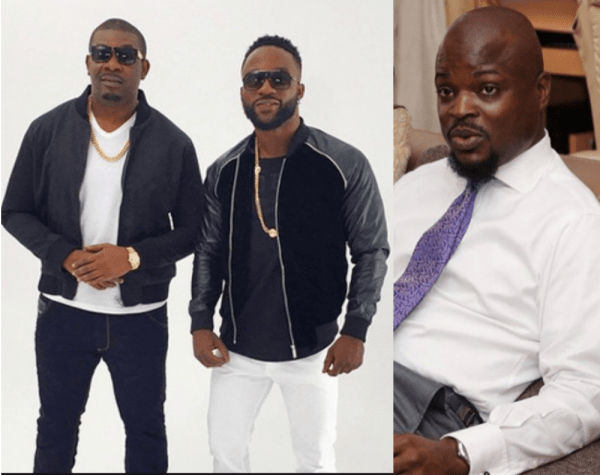 If you walk into their Victoria Island office complex in Lagos, you will immediately know that The Temple Management Company is not your run of the mill company. There is a certain serenity around the complex that makes you know that those who work there are creative minds. Lots tell you more. The company is made up of creative minds managing great talents in the Music, Movie, Sports and the Media. Also, the company is run by young people, all under 40 and what they set out to do is to pick up talents in all the aforementioned fields and help manage them to reach greater heights.

The Temple Management company is run by Idris Olorunnimbe as CEO. He is ably supported by 3 other executive directors Hamza Idris, Deji Olomojobi, Terfa Tilley-Gardo handling key departments of the company. Last week, City People Publisher, SEYE KEHINDE spent quality time with the creative minds at Temple Management. And he interviewed the CEO of the company revealed a lot about this company who currently making waves in the Music, Movie, Sports and Media sectors of society.

Idris is a consummate strategist and philosopher. He has a Law Degree from the prestigious University of Lagos, Nigeria. He was born on 4th of July 1978 and hails from Lagos, a cosmopolitan city where he grew up and has served. He began his education at St. Saviour Primary School, Ebute Metta before proceeding for high school at Federal Government College, Ijanikin, Lagos.

As an entrepreneur, he has helped build an unusually wide variety of businesses, including a Pre-School, an automobile company, a record label, and two Nigerian fashion brands. He continues to serve in the advisory capacity in those companies even as he admits that Temple represents a culmination of his life’s work.

Idris has a passion for public service, and he worked as a Personal Assistant and Senior Special Assistant to Mr Babatunde Raji Fashola, SAN, then Governor of Nigeria’s leading State, Lagos, from 2007-2015. Before then, he co-wrote a policy paper on driver reorientation in Lagos which led to the introduction of Drivers’ Institutes in the state.

He mentors several young creatives and frequently engages in public speaking in that capacity. An avid art collector, he has long-standing relationships with creative talents and entertainers alike. He has supported several concerts, shows and sports tournaments in Nigeria.

Idris is happily married to Abisoye and they are blessed with three daughters. He is a proud Lagosian and has lived in the city all his life.

In just two years, Idris Olorunnimbe has piloted Africa’s fastest growing creative firm to break boundaries and position itself as the go-to team in the industry. TMC was key to the staging of Sunny. On Sunday and the record-breaking King Sunny Ade Guitar auction amongst others.

Temple Management Company (TMC) offers a 360-degree service in 4 key spheres of operation, namely entertainment, sports, arts and media. It has a solid footprint across Africa as well as the United Kingdom and the United States.

The Temple Management Company is into Entertainment, Sports, Arts and the Media. How has it been actualising the goals you set out to achieve two and a half 3 years ago?

Just for clarity, Temple is not quite 3 yet. We will be 3 years come March next year and what a journey it has been! We launched in March 2016 with a very clear vision to be the leading pan-African sports and entertainment agency. We knew what solutions we set out to provide in a very peculiar industry populated by young talented and creative people. Our goal is to manage and represent the best among this pool, optimize them and make them compete in the global marketplace.

To achieve this goal, we have existing partnership arrangements with global players such as Roc Nation in the US, First Access in the United Kingdom and Touch HD in South Africa. In addition, we now have office extensions in South Africa, East Africa and Francophone Africa.

Let me give you the example of one of our young clients, the 13-year-old Tennis prodigy, Marylove Edwards, who has moved from being a Nigerian champion to becoming an international star-to-watch. Through our intervention, she now schools at the world-famous sports education institution, IMG Academy, Florida which has trained the greats in the sports such as Andre Agassi, Bjorn Borg, Pete Sampras and the Williams Sisters. Fresh on the mind is the recent accomplishment by another one of our talents, Bisola Aiyeola, who emerged as AMVCA Trailblazer. The list goes on of how we continue to optimize our talents from sports to the arts, media and entertainment. As I mentioned, this is a journey and we are for the marathon.

You also seem to have a wide tentacle from Nairobi to Johannesburg to London and New York What is this meant to achieve?

The plan is to become a bridge builder for African and global talents to form synergies across the uncharted frontiers of sports and entertainment. We are a pan-African establishment and it is not just a fancy description that you see on our website which you should see by the way. This is why we have footprints in the places you have mentioned. From Nairobi to Abidjan and Johannesburg, the Temple goal is same; the pursuit of African excellence.

What was the idea behind the setting up of the company?

We identified a gap for a 360-degree representation of talents, a one-stop shop for management,

marketing and representation. I must say that before there was no existing model for what we were trying to do so we had to incept rather than reinvent. Our consultants returned our briefs when we were trying to lay the blocks for the foundation of what we are building. There was no structure in place nor pre-existing model. That’s a sad reality. Rather than deter us, it spurred us on. The advantage is that it gave us a clean slate with which to work with and to paint an idyllic portrait of the sort of landscape we wanted to operate in.

How did you put together your team to be able to actualise the mission and goals of the company?

The first thing I have to say is that I am extremely proud of my team. It is the A-team. I consider my role as a privilege to lead some of the most talented and hardworking crops of people who have put in several years of experience into their careers to join us as pioneers. Members of our team were recruited based on references and I make bold to say we have the very best in the industry. This was a major puzzle in the jigsaw too, as you said, actualize the goals of our company. I cannot lie and say that we are where we want to be yet but I am pleased that we are on track.

As Founder/CEO, what has your experience been?

It has been an amazing experience fraught with its own possibilities and unique challenges. I must confess that this not my first experience working with creatives and talents. I have played different roles at one time or the other in the careers of some of the known talents that you know today. Except that I now work from the frontlines and not from behind the scenes. Before we started, a lot of people warned about the disregard for principles and agreements by creatives so it is not something we are unaware of. We have already experienced our own fair share but it won’t stop us from continuing to build our legacy. We are doing the tough job that somebody has got to do. We remain resolute and committed to building a system that would become a beacon of light that will bring professionalism and accountability to the sports and entertainment industry. It is possible!

Tell us a bit about you. Where were you born, where did you grow up and schools attended?

I am a Lagosian through and through. From my primary to a tertiary institution, I am proud to say that I have lived all my life here. I began with my primary school education at St. Saviour Primary School, Ebute Metta before proceeding for secondary school at Federal Government College, Ijanikin, Lagos.

I am a graduate of Law from the University of Lagos (UNILAG).

What in your past prepared you for your present role?

Working closely as a Special Adviser to the former Governor of Lagos State and now, Honourable Minister of Power, Works and Housing, Babatunde Raji Fashola, SAN is like going to the best postgraduate business school. With him, no one day was similar to the next. I saw first-hand how he unknotted complex issues, embracing leadership with aplomb all the while displaying his multi-tasking skills on a genius level. After our second term in office, I was convinced that I had been through school and it was now time to put what I had learnt into practice.

READ ALSO: BEING AN ACTRESS IS MY CALLING – FAST RISING ACTRESS, OMOWUNMI DADA

We Are Into The Business Of Managing Talents – IDRIS OLORUNNIMBE was last modified: October 8th, 2018 by Seye Kehinde