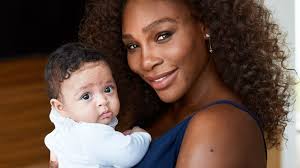 Serena Williams’ daughter, Alexis Olympia, is turning one on Saturday, but it will be free of fanfare, according to her mum.

At a Saturday press conference surrounding the U.S. Open, the 36-year-old tennis superstar explained why she and husband, Alexis Ohanian, aren’t planning a party for their daughter.

According to Wikipedia, Jehovah’s Witnesses “is a millenarian restorationist Christian denomination with nontrinitarian beliefs distinct from mainstream Christianity,” and those who subscribe to the faith typically don’t celebrate birthdays, Christmas, Easter and some other holidays.

This has not gone down well with many of her fans and social media followers, though, as they criticised her other lifestyles.

See some of the comments:
“Does she celebrate wins?” asks Kevin

“She’s a Jehovah witness and got pregnant prior to marriage and then married outside of the faith.,,yet, she feels the need to follow this principle which is vaguely biblical based, in that, it is not mentioned in the scriptures, save only in disastrous outcomes celebrated by the unfaithful, but no commandment not to do so.,” asks M.

“Wow that’s so sad. Some of my best memories are of my kids birthdays. But she celebrates when she wins but not her kid’s birthday? Ok,” Joni writes

“Wow, that’s so sad! I remember kids in school sitting in the hall alone because they couldn’t be apart of this or that. They always looked so sad and I always felt so sorry for them. Some of my best memories are of the terrific birthday parties my mom planned for us kids and dad. She was so amazing at it, we were not spoiled but still had lot’s of fun,” writes Tracy