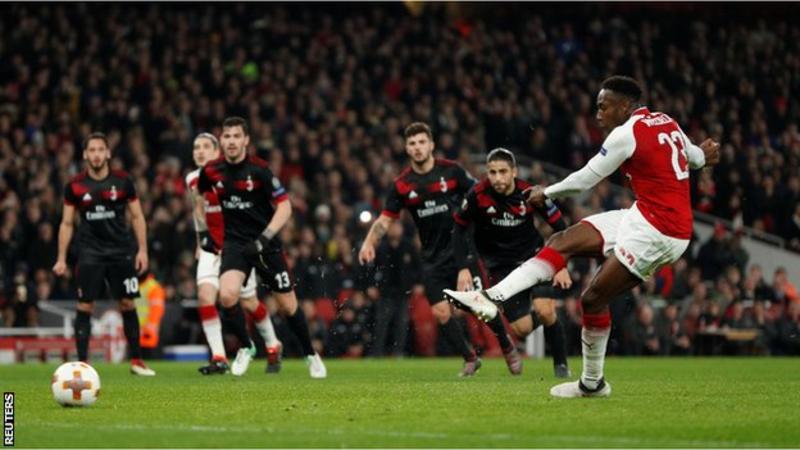 Leading 2-0 from the first leg in the San Siro, the Gunners fell behind on the night when Hakan Calhanoglu produced a wonderful finish from 30 yards after being allowed to run unchallenged.

The Gunners levelled within four minutes through Welbeck, who was controversially awarded a penalty after going down under minimal contact from Ricardo Rodriguez.

Xhaka’s long-range effort bobbled into the net for Arsenal’s second after poor goalkeeping by Milan’s highly rated Gianluigi Donnarumma, before Welbeck headed in a third.

“It was an open game. We played backwards a bit too much in the first half to protect the result. We played a very good side,” said Wenger.

“We have to improve defensively, but overall we are team with technical quality which is more attack-minded.

“We struggle a bit more when we have to defend. We finished the game more compact and more solid.”

Victory meant Arsenal reached a European quarter-final for the first time since 2010.

On the subject of Welbeck’s penalty, Wenger said he would “give an honest answer” after re-watching the incident, but AC Milan boss Gennaro Gattuso insisted it was not a spot-kick.

“In the same way a player can make a mistake, a referee can do a mistake,” he said.

“Even myself when I was a player, I would take advantage of individual situations. I’m not going to judge these things.”

Former England midfielder Jermaine Jenas, speaking on BT Sport, said: “It was a bad dive. It is cheating. Players like Dele Alli have been accused of that.

“It does tarnish the performance slightly. It was Wenger who said the English are getting better at diving; it was one of his own tonight.”

Reps Members Resolve Not To Address Fayemi As “Honourable Minister”