Home Brands What Indomie & Supreme Noodles Have In Common
Brands

What Indomie & Supreme Noodles Have In Common 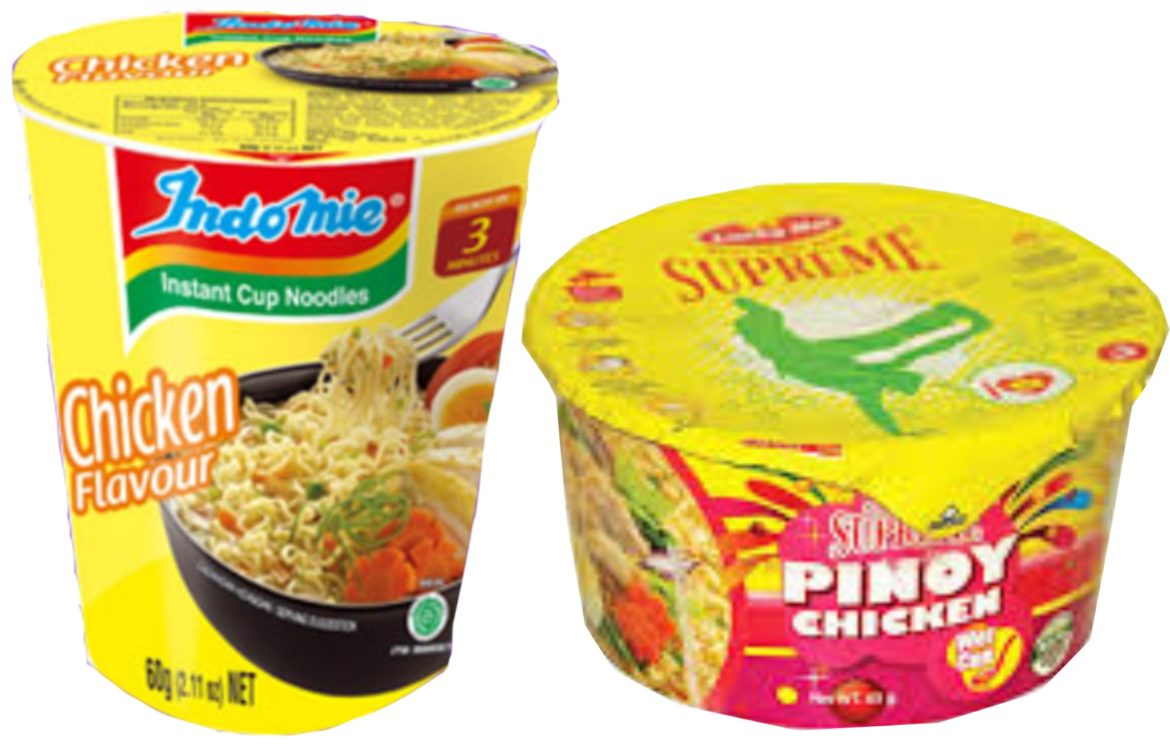 A few weeks ago I attended a top celebrity function in Lagos and something fascinated me. I saw a very long Menu list and right there and there, I saw an unusual menu at a Naija party. Looking straight into my eyeball was a well-garnished Noodles with all kinds of party Jollof ingredients and while sliced pepper, onions and tomatoes with chopped beef, fishes and suya. It really tasted great. I was surprised that noodles have joined our regular owambe menu list. That’s simply to show that noodles have become accepted in our society. But something more fascinating was that I saw that two brands of noodles were cooked at the party. Both brands had similar packages and I began to wonder why. Was it that the organisers didn’t notice the difference, was it a mistake, or they picked both brands on purpose. These questions began to well up on my mind as I took my seat and treated myself to a well garnished Naija party bollonis. That experience made City People’s Brands & Product take a deeper look into the Nigerian noodles market and pick out 2 top brands that look so much alike in terms of packaging. But like one of those brands emphasised in one of its TV commercials, the taste is the difference and the difference is in the taste.

Over the years, the noodles market had looked unattractive and companies never thought there was an economic benefit from that sector, until DUFILFoods, manufacturers of Indomie noodles ventured into the market. But since the entrance in 1993 by way of importation and the eventual establishment of factories in Nigeria, by DUFIL foods, noodles had become a regular meal, not only for children but also for adults and Nigerians living overseas.

Many companies presently competing in the noodles market today had left Indomie to operate for close to 11 years, until in 2007 began to expand, witnessing some pockets of new entrants such as Mimee, Uno, Dangote, Honeywell, Supreme, Tummy Tummy, Sum Yon, etc.

Nigeria has become the 12th largest instant noodle market in the world, where locals consume 1.76 billion servings of noodles annually. While there are currently 16 brands battling for customers’ attention, according to the 2017 Kantar WorldPanel report, Supreme noodles seems to have pitched its tent beside the acclaimed market leaders, Indomie for a slice of the market share.

Indomie is the first instant noodles brand in Nigeria. The product hit the Nigerian market in 1995 following the incorporation of De-United Foods Industries, a collaborative venture between Salim Group of Indonesia and Tolaram Group of Singapore. Over the years, the company has gone through various transformations, but the Indomie brand, its unique characteristics, and market dominance remain the same if not stronger.

Supreme Noodles, on the other hand, is relatively new in the market. It is not clear when the brand was first introduced into the Nigerian market, as all efforts to confirm this from the manufacturer (Primera Food) proved abortive. But according to some vendors of the product, it came into the market between late 2016 and early 2017. During this time, the FOREX crisis in the country had caused the prices of virtually all the other competing brands to skyrocket, giving Supreme Noodles the needed opportunity to present itself as the much-needed substitute.

SIMILARITIES BETWEEN INDOMIE AND SUPREME NOODLES

One of the reasons why we chose to compare Indomie Noodles with Supreme Noodles is because of the striking resemblance between the two brands. This resemblance is most noticeable in the packaging. Having been in the market for the past two decades, it is safe to say that Indomie is the one being copied by Supreme. Virtually everything about the packaging is copied: its mostly yellow colour, the text fonts, the strategic location of the brand name on the package, etc.

DIFFERENCES BETWEEN INDOMIE AND SUPREME NOODLES

Spotting the difference between Indomie and Supreme Noodles may be a bit difficult on the face value but the taste says it all. Many customers believe that every noodle in Nigeria has its unique taste and some believe that they can identify each noodle brand from its taste. Brands & Products dug further having spoken with some customers who couldn’t differentiate between both products and found out that the way both products are being presented to the same audience differs in so many ways.

Somebody might probably ask why compare brands based on TV commercial? Oh! Yes, TV commercials are probably the first point of contact between many noodles brands and their prospective client. Remember the days of ‘boom sha! sha!’ when Mimee noodles landed on TVC? That’s where most urban dwellers got to know that there’s a new brand of noodles in time and same with many others.

When it comes to targeting a particular set of audience, especially the children, Indomie has done so much that it will take harder work to get match their feat. Starting from the days of Indomiesuper heroes down to Indomie ‘Mama do good commercial’, they have appealed to the conscience of many children who would even identify every other noodles brand in the market as Indomie. Do you also remember the cash for scholarship promo adverts? Children were made to believe that the difference in all the brands of noodles is in the taste. Indomie has always made children and family its target market but children have always been its focal point.

So far for Supreme noodles, it has done well but its media presence is definitely incomparable to that of Indomie. Supreme noodles had a song in Pidgin English done by a Nigerian, Stainless with an Instagram handle Dubemstainless. That song went viral but didn’t do much unlike Indomie’s ‘Mamado good’ that became a street song after a few airplay.

The reason why SupremeNoodles may want to imitate Indomie? This much is clear to; leverage on the brand loyalty Indomie has achieved over the years. According to AlhajaBarakat who has a neighbourhood provision store at Ojuwoye market in Mushin area of Lagos, some noodles consumers often get deceived by Supreme Noodles’ packaging and so buy it thinking that they have bought the actual Indomie. Meanwhile, out of all the noodles brands in Nigeria, Indomie is the first to have enjoyed such elongated brand loyalty.

WHAT SELLERS ARE SAYING

Brands & Products went into some popular Lagos market to ask how the similarities between Indomie and Supreme noodles is affecting the sales of both brands. Firstly, it was at Ojuwoyemarket in Mushin and a noodles retail seller had this to say; “Almost all the customers that come here to buy noodles tell me they want to buy ‘Indomie’. To them, they are all Indomie. And so when you give them any brand of noodles, they really don’t care. It’s only a few customers who actually specify which one they want. When some see the way supreme is packaged, they won’t care about reading what is on it because they believe that they have the same colour.  Mrs. Tanwa Orilowo said.

Miss YemiBalogun who works with Vijibuks Enterprises, distributors of noodles and flowers in Jakande Estate, Isolo told Brands & Products a different story entirely; she has this to say. “Yes we sell Supreme Noodles very well. It has been in the country for close to 7 or 8 years, I’m not too sure about that. But when they first started, they always add 8 extra packs into one carton and this drove a lot of customers to them. Many of our customers that used to buy Indomie and other brands switched to Supreme Noodles. However, they stopped adding the extra packs and we noticed that the patronage reduced. Although they still have their own customers, they cannot be compared to Indomie noodles.”

But despite the likelihood that Supreme Noodles might be taking advantage of its competitor’s brand loyalty status, the truth remains that Indomie continues to maintain market leadership. As a sales rep at GB stores, a supermarket at Ejigbo said, Indomie is still preferred a lot by consumers when judging from the volume of sales recorded daily.

Some of the consumers who spoke with Brands & Products didn’t hide their feelings about their preferred brand while some didn’t have any preferred brand. All they know is that they eat noodles and they eat whatever comes their way when they need it. Three school children, Gift, Nnamdi and Chioma of the same parents were the first to speak with Brands & Products. These three primary school children were not afraid to express their love for Indomie noodles. “We eat Indomie every day and we love the indomitable superheroes, they said.” Mr Olaniyan Bankole is a bachelor and a bank manager who eats whatever comes his way. “I just buy noodles and eat. I don’t care what name it’s called in as much as it can fill me, I’m good, he said.” Bolade Francesca says “Dangote noodles is now rebranded now, it is rated the best noodles in terms of quality.” Mrs Juliana Nwaigbo says “I’m a fan of Supreme Noodles always. I never liked Indomie so I was always looking for an alternative and the day I saw Supreme, it became my choice. I was also able to convince my children to like eat and that’s because it looks like Indomie and they are too young to spot the difference.” A young mother of two has this to say: which brand can be compared to Indomie? I’ve been seeing some other noodles but I can’t buy them. I grew up eating Indomie and so will my children. It is a product that has stood the test of time and that is how to know the quality, she concluded.

What Indomie & Supreme Noodles Have In Common was last modified: March 25th, 2020 by Damilare Salami

Tesco is the first to can plastic...