What Late DELE GIWA’s Wife, FUNMI Wrote About Him 35 Years Ago 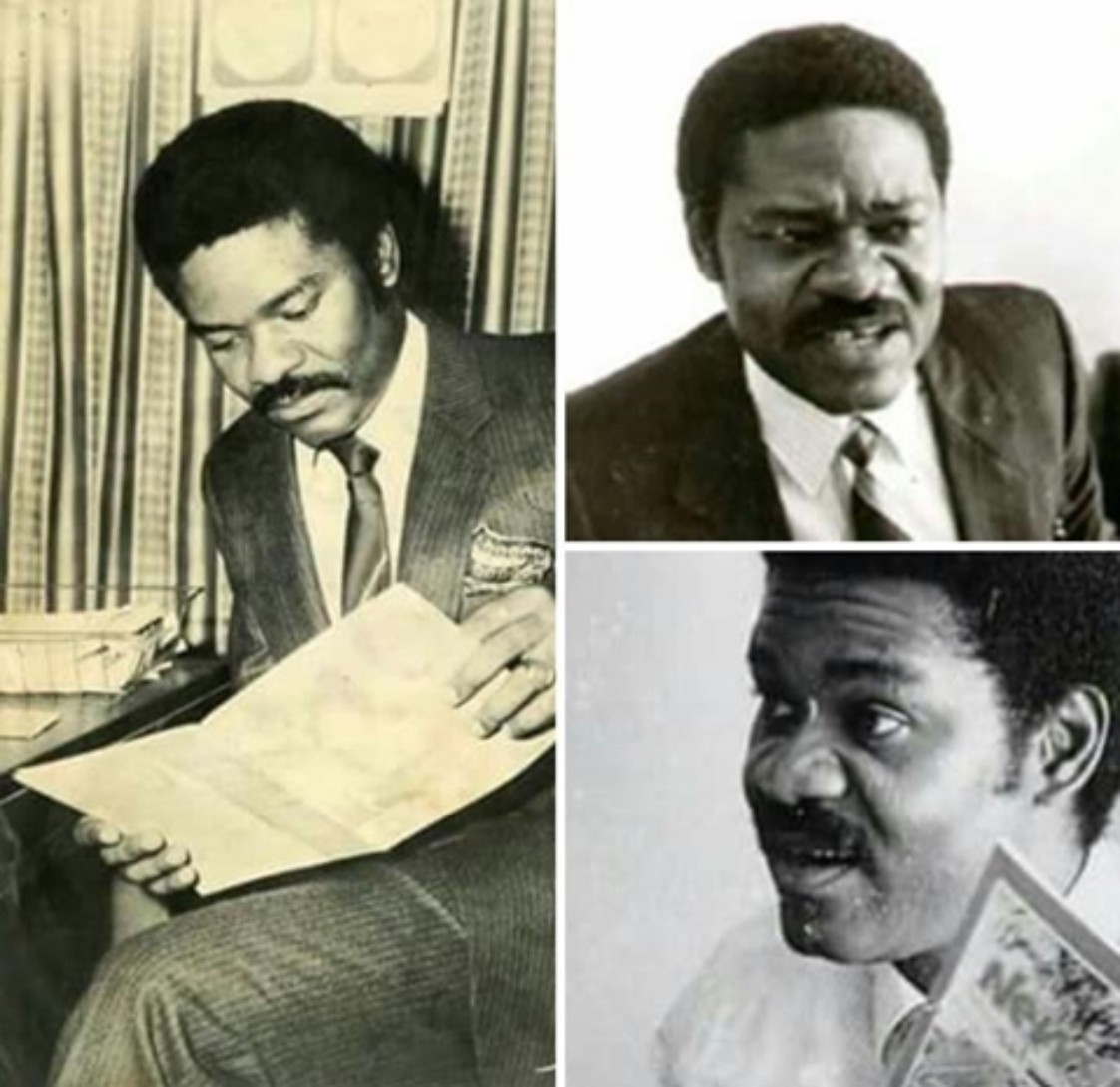 Until he died in October 1986, the late Editor-In-Chief of Newswatch, Dele Giwa was married to Funmi Dele-Giwa. Shortly after his death, Funmi revealed a lot about her life with her late husband. Below are excerpts.

“I met him for the first time in Ray Ekpu’s office in Concord. My father just died and I was looking for a job with my M.Sc certificate.

In fact, Ray and I were classmates during my M.Sc degree programme at the University of Lagos. On that day, Ray, as the Chairman of the editorial board of the Concord, invited me over for possible consideration as a Member of the editorial board. Dele Giwa, walked in, looked at me and said, “Hello Madam”. I absent-mindedly answered him, as my concentration was on the job I wanted so badly, and wondering when Ray will come into the office.”

“I didn’t know who he was. My knowledge then of anybody in the journalism profession was very limited. I knew there was a Reporter who writes a column called Parallax Snaps; but I did not know who it was; in fact, I only noticed the column because it reminded me of my college science classes where they taught us something about parallax. Ray was to tell me later that Dele asked him what was the matter with me, he greeted me and I felt too big to answer.”

“Eventually, I did get a job at Concord, not as a member of the Editorial board, but as a staff of the Business Concord.

“Then, Dele came to my section to chat with everybody, including me. When I learned that he was the Editor of Sunday Concord, I thought, ‘he’s one of the bosses, and I started addressing him as ‘Sir’. By this time, I had noticed that he dressed well and was very good- looking”.

“We somehow got round to exchanging phone numbers. but neither of us called the other. One day, he came and told me to see him in his office. Why? I thought to myself, but decided, I might as well get it over with. I went there, We discussed a lot of things. During these discussions. Dele managed to express his deep interest in me. I told him bluntly that I had somebody else, and besides, I do not go out with married men. Dele told me he was not married, and would persevere”.

“On our first date, he took me to Bacchus Restaurant and Night Club at Awolowo Road, Ikoyi. I had the greatest time of my life. By the end of the evening, I knew I really liked him. That was when I started feeling something for him. We discussed so many things, he was so brilliant, so lively and alive (I cannot believe he is no more … on that first date he told me about his last marriage, how  he rushed into it, and the disaster it became. Dele insisted our courtship must last a long time, which was very fine by me as I was not even thinking of marriage.

We travelled together for the first time to Ivory Coast. Of course, I lied to my mother that I was going on an assignment.

We got engaged in Dakar. He gave the ring with such ceremony and poetic verse. Like he started by calling on both of our fathers in heaven to be witnesses to the engagement! I remember when I told him I was pregnant He was really yelling over the phone. Then, I thought, Oh my God, why the excitement, afterall he has 4 kids already. But he was genuinely excited, even more excited than me.”

“He was that romantic! The traditional ceremony was very simple. My mother was against the marriage at first, but I insisted that it was what I wanted. For the real marriage, we went to the Registry at Ikoyi, made our vows, and then invited guests to lunch. It was very simple. At the reception, Dele wept while responding to the Toast, to my greatest embarrassment. He was so emotional. He said he never knew anything good would ever happen to him again. Not after his past disappointment in marriage”.

“Dele was a good man and husband. He knew what was required of a husband, and those required of a wife. He was very good to me, unlike the rumours I heard about his past marriage. He found it very easy to apologize. He never failed to reassure me each time there were some disturbing news flying around about him, his past marriages or affairs, as he realised I’m a very sensitive person. I heard very discouraging things about him before the marriage, that he was a flirt, a heart-breaker etc, but I persevered. He was so good to me. He made it obvious it was his wife first. He always said it was his pleasure to give me pleasure. He wanted our marriage to be an everlasting romance. We had our bad moments, but we always made up. Everything in the marriage was explicit and clear. He loved his family so much. (I can’t believe he is dead).

I remember when I had my baby,

Ayodele. By the way, he calls her Aisha. He prefers it. He named her after Steve Wonder’s daughter and it, means life. I went into labour on a Wednesday which I know, that is Newswatch’s Production day. He shuttled between the office and the hospital all night. When I had the baby on Thursday morning, he was in the labour room with me. He insisted that he wanted to see everything. He was by my side through the pain and anxiety.

Dele’s work was very important to him.

He loved Journalism. He wanted Newswatch to be like Newsweek and Time Magazine. As much as he felt Nigeria was a terrible country in certain respects, he never regretted coming back to the country. He believed here is where the action is, to contribute his own quota”.

“At times when he would tell me about certain things he had to write about. I would get frightened and tell him its too dangerous. He insisted that he could not help it, because someone has to do it.”

“One thing I’m certain of, is that Dele was never afraid to die for this country.”

“He loved Youth, its vivaciousness and gaiety. He wouldn’t have wanted to be very old. He always said a man should die while still active. Not old and useless to himself. For him, late ‘60s’ is the most a man should live. Dele had a very open mind about religion. He felt that as long as a man is good to his fellow human beings, he will be accepted by God. He did not believe that you have to pray to God through Jesus Christ or Mohammed to make it acceptable. When Dele does pray, it was always to thank God for all he has done for him with trivialities like his personal needs.”

“On that grim Sunday, Dele came downstairs from bed, into the sitting room where Kayode Soyinka and I were already seated. As usual he said, ‘what are the papers saying today?’ He normally goes jogging each morning, but didn’t on this particular day. He was his normal cheerful self. For breakfast, he was served moinmoin and Ogi. That was his normal Sunday breakfast. That was what he was eating when it happened. When the accident happened, I rushed into the study and saw his legs split open, bones scattered on the floor, I dragged him out, away from the fire, People asked me later how I managed to cope, that I had Courage. But what could I do? He had to be saved, I thought to myself. Dele is a struggler, he will not die, he will survive.”

“Dele told me to lift his legs and I said no if I do, the legs will break. All the way to the hospital, he was talking. I was not hysterical because I believed in his will to survive. I thought all through the waiting period that the worst that could happen was that he would remain in a wheelchair for the rest of his life. Dele talked until he died. He asked for Aisha. Somewhere during the whole night-marish event. Dele told me, “they’ve killed a great mind, you know”? And I told him not to worry, that they have failed and that we would live, launch our own attack on them when he got well. I was so convinced he would live. I do not think he thought he was going to die.

Dele lived and died for his work and ideals. He hated discrimination of any sort, at all levels. He believed absolutely in Loyalty and Dedication to one’s cause, especially towards friends. He respected intelligence in people, the ability to reason, analyse a situation by oneself not based on some textbook theories. This incident has strengthened me, but I will not comment on what I’ll do. I do not bother myself about people’s response because I believe it does not matter, I know him very well. What they think does not make a difference to me.”

“Up till now, I’ve not allowed myself to think beyond the fact that he is dead.”

“Something within me stops me from going beyond that point. I know he is dead, but I’ve refused to dwell on it, think of the implications of it. I more or less feel he has gone on one of his journalistic missions.”

–Culled From The Guardian

What Late DELE GIWA’s Wife, FUNMI Wrote About Him 35 Years Ago was last modified: March 17th, 2021 by City People

How The Unity Of YORUBA Was Shattered By KIRIJI WAR!