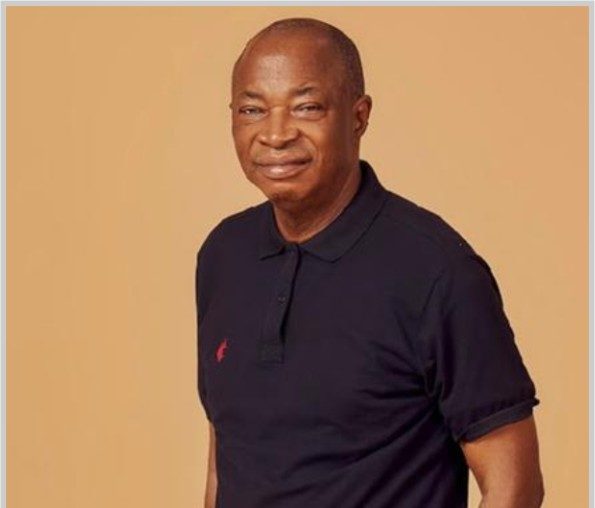 If you run into Engr. Prince James Funso Ojo today you won’t know he is 70 if you are not told. He does not look that far gone in age.

City People met him a few days ago for an interview and we met a sprightly man, full of life. He is blessed with a robust sense of humour. He is a very brilliant man who bubbles with ideas. Don’t forget he is a Petroleum Engineer.

Let us tell you more about this highly successful and accomplished man who is now an Educationist. He has been running a school for the past 10 years since he retired from active service with NNPC. He is the Chairman of Tesjok Group of Schools in Lagos. He was born on the 19 of March 1951 to the family of late Oba John John (Oolojunja of Otunja) and Madam Janet Aina Ojo Eki (nee Ogungbe) in Ikole- Ekiti Lga, Ekiti State.  He had his Primary School at St. Peter’s Anglican Primary School, Ikole-Eki and Inalende, Ibadan. His secondary education was at Christ’s School Ado-Ekiti between 1966 and 1970. He worked with the Federal Office of Statistics, Ikoyi, Lagos from 1971-1973.

He studied Petroleum Engineering at the University of Ibadan, from 1973 to 1978 where he obtained a B.Sc (Hons) in Petroleum Engineering. He served his one-year NYSC at the Nigeria Agip Oil Company, Port Harcourt, Rivers State. He was employed by the then Nigeria National Petroleum Corporation NNPC in 1979. He was in the Department of Petroleum Resources for 32 years, where he visited countries like Italy, France, Ghana and U.S.A on different occasions, to represent Nigeria on different reservoir and gas projects. He rose to the post of Reservoir Petroleum Manager and retired after getting to the retirement age of 60. He retired on the 19 of March 2011. To keep the body and soul together, he is currently the Chairman of Tesjok Group of Schools, Abaranje, Ikotun Lagos.

He is a community man who has the interest and development of his people at heart by giving scholarships to his people to school certificate level. Engr J. F. Ojo belongs to various associations like the Society of Petroleum Engineers, Vice President of Ooyunya Sons and Daughters Association, Lagos branch. He is an elder and a staunch member of Redeemed Christian Church of God, Solid Parish Province 14, Egbe, Lagos.

Engr J. F. Ojo is happily married to his heartthrob, the ever beautiful and Gorgeous Yeye Adejoke Ojo and the union is blessed with lovely children.

I feel happy. I feel grateful that I am able to live up to this stage, 70, because many of my colleagues from my town, are all dead, it is only one or two of the same age group are alive today. Because of that, I have to be grateful to God Almighty for sparing my life and to not make me have any Health challenge at 70.

I was not born with a Silverspoon, despite all the Glory of my father. We were all trained the same way just like the children of an ordinary person. That is why being alive today is due to Gods grace.

What were the morals value inculcated in you then?

In the first place, my father had 9 wives and my mother happened to be No 8. The moral values that he gave us was superb. It was to be independent on your own. So anything that happens to you, you have to hold yourself accountable. We were not treated like a silver spoon. All of us, we were about 54 in number. That was why I was able to leave home to feud myself.

I left home at a very early age. After my Primary School Leaving Certificate, I went to Christ School, Ado Ekiti. That was in 1966. That was when we use to carry wooden box to carry our clothes.

There used to be a vehicle called Korope in those days. We would wait by the side of the road. Even though my father had a car, none of us was taken to school in it because he didn’t want to treat one wife differently from the one. All the children related to each other as if we were born of the same mother. We were allowed to play with other children that are not of royal blood. There was no discrimination.

That is why we look at life as very simple. That is what I live it to today. I give God the glory.

What happened after leaving Christ School?

I left Christ School in 1970. Immediately, I came to Lagos to come and stay with one of my senior ones, born of a different mother at Idi-Oro, Mushin, in Lagos. I secured a job at the Federal Office of Statistics, at Obalande, in Ikoyi as a Statistician. In those days, it was very easy to get a job. You don’t have to know anybody before you secure a job. A friend of my brother took me there and to my surprise, I started work the same day. I worked there for about 3 years before I secured admission to the University of Ibadan to read Petroleum Engineering. I spent 5 years. That is prelim + 4 years and I obtained a B.Sc in Petroleum Engineering. During my course of study, we were always going out. That was how I got exposed to the practical Engineering aspects of the Oil industry.

I obtained my B.Sc in 1978. I went for my 1-year mandatory NYSC in Rivers State. At the camp, I was posted to the Nigeria AGIP Company. That was where I served for one year. In those days there were opportunities of getting jobs. During the period, I attended about 5 different interviews.

I went for Mobil Petroleum Company, AGIP, Shell and NNPC.

NNPC was at Falomo. The 10 storey building. I was posted to the Inspectorate arm of NNPC which later metamorphosed into the Dept of Petroleum Resources, the regulatory arm of the Oil industry. That was where I worked. I started with Petroleum Engineer, Grade 2 and rose to the level of a Manager. I spent 32 years in NNPC. That 32 years and about 10 years ago when I retired, as a Manager.

What have you been up to since then?

After I retired, I called my wife, to ask that as I was going for retirement what exactly do you think I can do because things won’t be as usual. She said she will prefer I run a school. I agreed and that was how I built a school and its called Tesjok Group of School in Lagos. That is where I am till today. Why I am happy is that during my career I was never found wanting. And I have not suffered from one sickness or the other. I normally go for my medical check-up at MECURE around Oshodi in Lagos. I don’t joke with that. And that is why you see me looking healthy till today. To God be the Glory.

What are the lessons life has taught you at 70?

To be contented with whatever you have or whatever God has given you. I am contented with life. Who am I in the presence of God almighty? I am here to give thanks to him, to give God the glory.

How do you see the current situation in the country today?

It is rather unfortunate that life is like this in Nigeria. When we were growing up we never knew life will be like this. In fact, in NNPC we all worked as one. We didn’t notice any Tribalism. All the tribes worked as one till I left NNPC 10 years ago. What I noticed also is that most of the important posts in Nigeria today are being manned by people from one part of the country. It is so sad. You know what I mean. People just move around the country in fear. You don’t know what will happen to you next.

Tell us a bit about your family and wife…

I have a very sound, lovely, kind wife and beautiful children. I got married in 1992 April to Mrs. Adejoke Ogunyosade-Ojo, who has been my mentor all these years. I have been able to keep myself still as fresh as this at the age of 70 because of my wife. She is very, very accommodating. I have 4 children-3 boys and a girl. They are all graduates. 1 is in US. 1 is in Canada and 1 in NBA, Abuja. My last girl is working here in Lagos. She is staying with me. Why won’t I have to be grateful to God. No sickness. And all my children are doing fine. The one in Canada is a Pilot. The one in Abuja is a lawyer. I don’t have any cause to regret marrying my wife. I am also grateful to my mother-in-law.

What did you see in her that made you choose her as your wife?

It is interesting because the 1st day i saw her at Ado Ekiti, was the day I said this is my wife. And I approached her in my inlaws house at Ado Ekiti that day. The children of my Senior sister said we know her. She is Auntie Joke. She’s very good ooo! She works at Ondo Radio Vision. I said, that does not concern me. I told them, this is my wife. And I pursued her. She’s my wife till today since 1992. Almost going to 30 years.

What has been the staying power of your marriage?

Patience. I have been able to tolerate her. I understand her perfectly. Even when she is annoyed I will tell her, sorry my dear. Don’t be annoyed. I know I have offended you. If one cannot succumb to each other, it causes problems in marriage. She gets angry easily. Me, I am cool-tempered. So, we match each other. That is why we are able to cope.

Let me add that my mother in law, Mrs. Badmos, who lives in Ado Ekiti, is an asset to me. She contributed a lot to the success of my marriage. If we have any misunderstanding and my wife calls my mother-in-law, she is always behind me. Even when I am wrong, she will never support her daughter. One thing that I did that contributed to the success of my marriage is I never reported my wife to my mother. I never. I have never for once told my mother, Mama ooo, this is what Joke did ooo. No. Never. I prefer to talk to my mother-in-law. And she has tremendous respect for me. If I call her now and I tell her I am coming to Ado tomorrow, she will say with all pleasure. She will start cooking the correct soup for me. I respect her a lot. And I took all the junior ones of my wife as my own children. Most of them lived with me. There is no one out of the  6 of them (my wife is No 1), the remaining 5 that didn’t live with me. Why won’t my mother-in-law not be happy?

READ ALSO: WHY I ALWAYS ALLOW SARAFADEEN TO PERFORM BEFORE ME @ PARTIES – FUJI STAR, PASUMA

What Life Has Taught Me At 70 – Prince Engr. JAMES FUNSO OJO was last modified: March 15th, 2021 by Seye Kehinde

Why I Always Allow SARAFADEEN To Perform Before Me @ Parties – Fuji Star, PASUMA