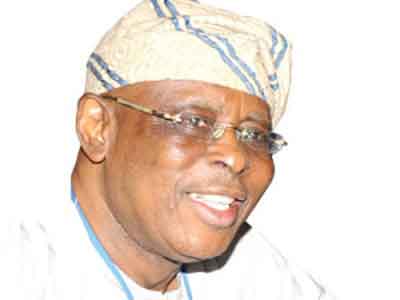 Chief Olusegun Osoba, the former governor of Ogun State has revealed what made him succeed as a young Cub Reporter in the early 60s. The former Ogun governor reflected on his early days as a Reporter at Nigeria’s oldest newspaper, the Daily Times, in his new autobiography ‘Battlelines: Adventures in Journalism and Politics.’

The book will be launched in Lagos on Monday 8th July 2019. He is one of the 3 pioneer employees who joined the Daily Times in 1964 after passing their A-levels. Chief Osoba was put under the tutelage of Guy Walls, an expatriate Training Manager from Daily Mirror in London.

“As Trainee reporters, whenever we went out on assignments along with senior colleagues, we would give our reports to Guy Walls to assess, correct and ensure that it conformed to the Daily Times house style,” said Chief Osoba. He recalled that he had earlier been advised to study Law

“The apprenticeship was successful, as our output outmatched all projections. It turned out that our reports were even considered better than those of some seniors to whom we were attached.

“So impressed was Alhaji Jose (Babatunde Jose, the pioneer Managing director of the Times) that 2 months on the job, he called me and talked me out of the idea of reading law.

“My Editor, the famous Peter Enahoro [Peter Pan], was equally impressed that he wrote to me and prophesied that I would have a successful career in Journalism.”

Those words of encouragement laid the foundation for Mr. Osoba’s successful career in Journalism, which kicked off with a nomination by Mr. Jose to study Journalism at the University of Lagos in 1965.

That was followed by a Fellowship at the Commonwealth Press Union in Bouverie House, London, in 1967.

By 1966, however, Mr Osoba had “written himself into recognition,” having reported so many exclusive stories that “the issue of whether I would remain in journalism or not did not arise.” “Journalism was already in my blood and there was no looking back,” he wrote.

“Those were the days when I was a man-about-town riding my Vespa Scooter motorcycle with registration number LK 1444. I covered political stories, especially the parliament, but often veered to other beats wherever there was news to report.

“What helped me to succeed in those years was an early investment in acquiring a telephone at home, which was a rarity in those days particularly for a young reporter.

“And I had a small Notebook which I always carried with me. It was filled with addresses and phone numbers of contacts, politicians and newsmakers. I built this extensive database from my years as a young reporter. My private telephone line was one of the tools that helped me to excel as a Reporter – a source of easy and regular contact with powerful sources of news.

“I was the only Reporter in Lagos in 1964 that had a telephone in his house.”

So successful was Chief Osoba that he became the most successful reporter of his age who proceeded to be doubly successful as Editor and Newspaper Manager of 2 regional newspapers (The Herald in Ilorin and The Sketch in Ibadan) as well as a national newspaper, The Daily Times. The book, Battlelines chronicles many important periods in Nigeria’s Print Media History, putting into focus the intrigues and power play in the various newsrooms. It also deals with the history of Press-Government Relations and the Rise and Fall of The Daily Times.

What MADE Me Succeed As A Young Reporter in 1964 – Chief Olusegun Osoba was last modified: July 5th, 2019 by Reporter

WHY I DECIDED TO WRITE MY MEMOIRS – CHIEF OLUSEGUN OSOBA